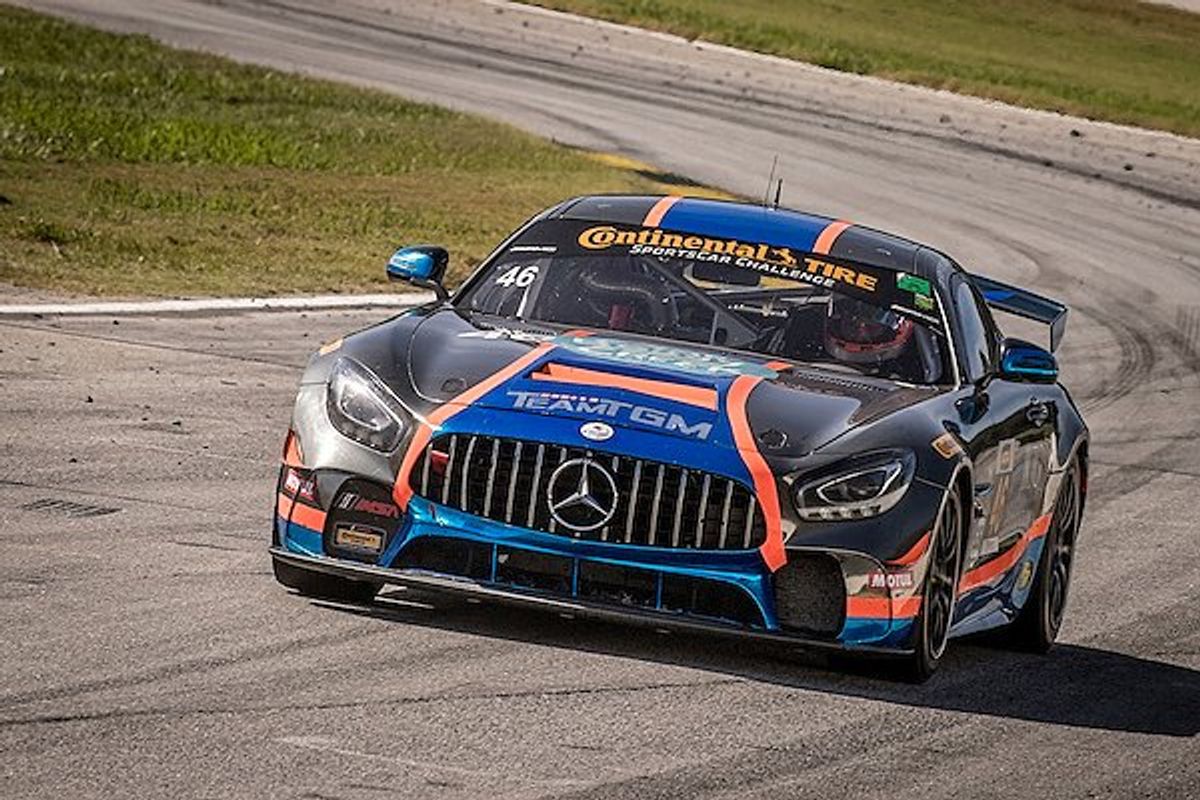 In addition to the first titles in North America for the Mercedes-AMG GT4, the championships are the first for TeamTGM, Plumb and Trinkler in the top-tier IMSA Continental Tire series GS class in the team’s first year of competition with Mercedes-AMG Motorsport Customer Racing.

The titles were earned by an unmatched run of consistency by TeamTGM and a dominating second half of the 10-race season that saw Plumb and Trinkler co-drive to a series co-leading three race wins and a third-place showing in a stretch of races from mid-July through early September.

In total, the No. 46 team and drivers completed every mile and all 776 race laps run this season, the only fulltime team in GS to accomplish this rare feat in 2018 IMSA Continental Tire series competition.

The team’s first victory at Lime Rock Park in July was the first race win for the Mercedes-AMG GT4 in North America in any series. One race later, Plumb, Trinkler and the No. 46 team took a championship points lead they would never lose with a third-place finish at Road America in early August.

Back-to-back race wins followed at VIRginia International Raceway (VIR) later in August and last month at WeatherTech Raceway Laguna Seca, and the No. 46 team and drivers came to this week’s finale with a comfortable 31-point championship lead.

The No. 46 sealed the team title simply by starting Friday’s two-hour race. Race-starting driver Trinkler and closer Plumb then clinched their co-championships after each met the 45-minute minimum driving time during their respective stints at the wheel of the No. 46.

With the titles in reach and eventually wrapped up in the race, Trinkler and Plumb turned in a cautious and careful cruise to an 11th place race result Friday, which was their only finish lower than eighth all season.

The No. 46 and its drivers ended the year with 281 points in both the team and driver championships, closing the season 25 points ahead of the second-place team and drivers.

The championships highlighted a banner day for the Mercedes-AMG GT4 at Road Atlanta that also saw co-drivers Bryce Ward and Indy Dontje finish third in the No. 57 Winward Racing/HTP Motorsport Mercedes-AMG GT4.

Dontje secured the top-three finish with a last-lap pass for third-place, the second time this season he pulled off a key pass for position after the white flag waved. In July’s Lime Rock race, Dontje made a last-lap pass to take second place, a finish that would prove to be the best of the season for the No. 57.

The Lime Rock one-two finish was the first for the Mercedes-AMG GT4 in North America.

The following day at CTMP, Russell Ward and Damien Faulkner co-drove the No. 33 Winward Racing/HTP Motorsport entry to a third-place finish that was the first podium showing for the Mercedes-AMG GT4 in IMSA competition.

Ted Giovanis, Team Owner – No. 46 TeamTGM Mercedes-AMG GT4: “This feels really great. You always have a little bit of apprehension, but as the race unfolded, we knew we were going to be clean and we would finish that first lap. Then the objective became to finish every lap. It was a big day for Mercedes-AMG and a big day for the team – the first championship we’ve ever won!”

Owen Trinkler, Driver – No. 46 TeamTGM Mercedes-AMG GT4: “The Mercedes-AMG GT4 performed flawlessly this season. Every time we have asked it to run a lap in a race, it has run it. Any time we asked it to run a lap in any session, it completed that. We can’t thank everybody at Mercedes-AMG, Mercedes-Benz in Germany and here at Mercedes-Benz USA for all of the work and effort they have put into this car. All of the development they previously did with the Mercedes-AMG GT3 really showed in the components and technology in the Mercedes-AMG GT4. This car is super reliable, and I am so happy for everybody involved in this program. From TeamTGM to Mercedes-AMG, we were kind of the new kid on the block a little bit with the car, so to pull off this championship and really dominate the second half of the year is impressive. I am very happy to be a part of this program.”

Hugh Plumb, Driver – No. 46 TeamTGM Mercedes-AMG GT4: “It was a very mixed bag of emotions going into the race. We knew that we only had to do a lap to win the team championship, and that was a strange feeling, but we did it! The Mercedes-AMG GT4 car was amazing, and I can’t say enough about the Giovanis family, for everything they’ve given me. We just wanted to get to the end. The team has been flawless all season long.”