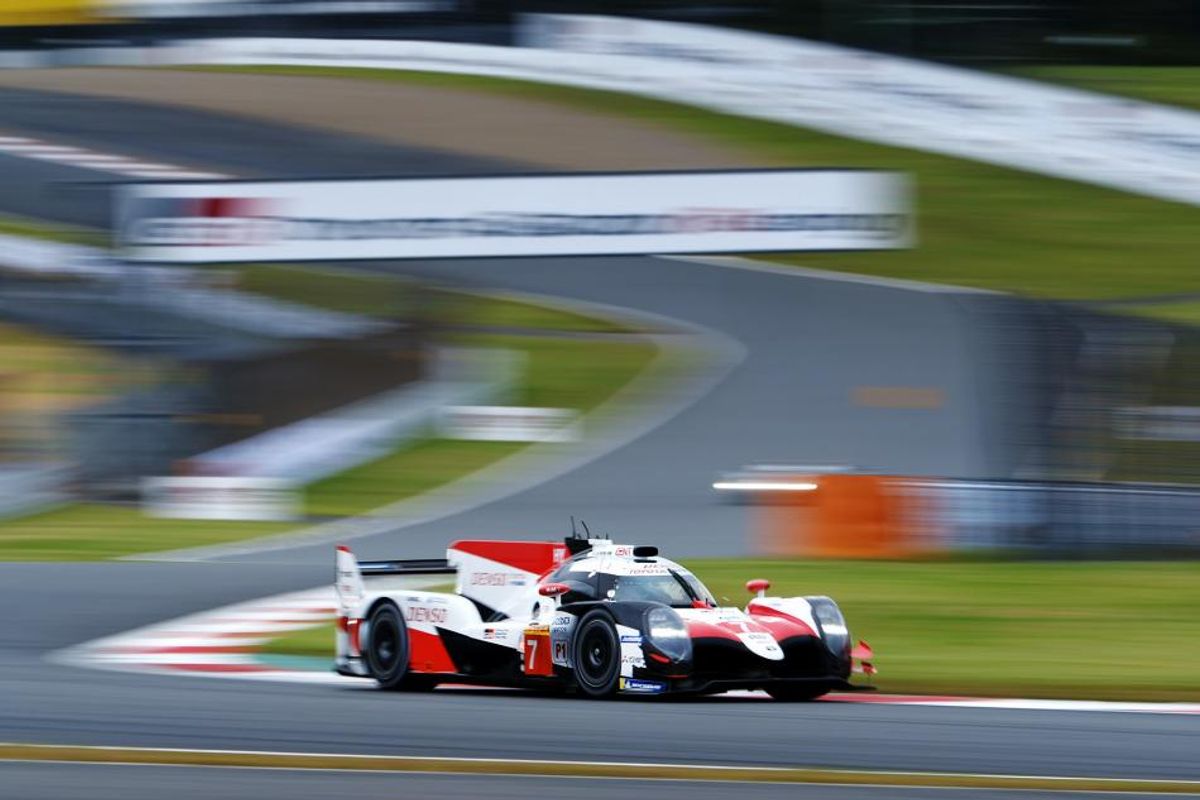 Kamui Kobayashi took the chequered flag at the end of a dramatic 6 Hours of Fuji to take a home win for himself and Toyota, with his teammates Mike Conway and Jose-Maria Lopez joining Kobayashi on the top step of the podium in Japan. This was the first win for the no7 Toyota TS050 Hybrid crew in the FIA World Endurance Championship and the first for Kobayashi and Conway since the 2016 6 Hours of Fuji.

It was a Toyota 1-2 as the no8 Toyota of Fernando Alonso, Sebastien Buemi and Kazuki Nakajima finished 11.4 seconds behind after 230 laps on a track that started wet but soon dried out. The no1 Rebellion Racing R13 completed the overall podium with Bruno Senna, Andre Lotterer and Neel Jani finishing the 6 Hours of Fuji as the first non hybrid car four laps behind the Toyota

The no11 SMP Racing BR1-AER of Jenson Button, Mikhail Aleshin and Vitaly Petrov fought back after a long delay caused by a wheel coming loose, with Button crossing the line in fourth place.

The no3 Rebellion Racing R13 was an early casualty after Gustavo Menezes spun off, crashing into the barriers in the wet conditions during the only safety car period of the race, which was declared when the no70 MR Racing Ferrari crashed on the main straight leaving debris on the track that needed to be cleared.

In the FIA World Endurance GTE Championship Porsche took the LMGTE Pro silverware with Kevin Estre taking the chequered flag in the no92 Porsche 911 RSR to stand on the top step of the podium with teammate Michael Christensen.

Porsche finished 12.1 seconds ahead of the no82 BMW Team MTEK M8 of Tom Blomqvist and Antonio Felix Da Costa, who took the German manufacturers first podium finish in the FIA World Endurance Championship.

The no67 Ford GT of Andy Priaulx and Harry Tincknell finished 3rd 25 seconds behind the no92 Porsche to make it three different manufacturers on the LMGTE Pro podium.

It was a debut win for the all Malaysian crew of the no37 Jackie Chan DC Racing Oreca-Gibson as Jazeman Jaafar, Weiron Tan and Nabil Jeffri took a well deserved and hard fought victory to become the first Malaysians to take a WEC win.

They finished 26 seconds ahead of their teammates Ho-Pin Tung, Gabriel Aubry and Stephane Richelmi in the no38 Oreca, with the newly crowned 24 Hours of Le Mans LMP2 winners Nicolas Lapierre, Pierre Thiriet and Andre Negrao completing the class podium in the no36 Signatech Alpine Matmut A470-Gibson.

The LMGTE Am podium also saw a debut WEC win, with the no56 Team Project 1 Porsche 911 RSR of Jorg Bergmeister, Patrick Lindsey and Egidio Perfetti after a hard fought battle throughout the whole class. The no88 Dempsey-Proton Racing Porsche of Mattteo Cairoli, Satoshi Hoshino and Giorgio Roda took second place after Cairoli passed the no90 TF Sport Aston Martin of Jonny Adam in final 10-minutes of the race.

Fernando Alonso, Sebastien Buemi and Kazuki Nakajima continue to lead the LMP World Endurance Drivers Championship on 84 points to Conway, Lopez and Kobayashi on 71. Gustavo Menezes, Mathias Beche and Thomas Laurent are still third on 63 points, despite not scoring any points in Japan.

“We had to start from P8 and we were quite disappointed and we had to have a take some risks strategy that is why we didn’t take the extreme wet tyre and with the two formation laps we were struggling to warm them up.

“After the second lap or something like that we only had the same speed as the privates so we decided to change as the same as Car.8 (extreme wets) and straight away our lap times were quite good.

“I think we were then a bit late on the inter tyre so we decided to jump on to dry tyres and we gained a lot of positions and gap during the safety car. In the end we could the margin to car eight.

“We obviously had a tough start at the start of the week but I think the team did a good job in preparing the car for the race and we all did a great job.”

“It has been tough on normal WEC races since last year. Sometimes we had a good car but somehow it was not on our side. But this time we started from the back as we had a bad quali.

“The first stint didn’t feel good and I think we were on different tyres to the others. It was a proper rollercoaster and after that first stint we made a good call for the second stint under Safety Car and then the car was improving over every stint.

“The team made a mega stop on strategy and we made all the right calls. We won a lot on strategy today because the pace on cars in the class was quite close.

“We are really proud to be part of this No.92 crew because we have been on the podium for every WEC race, so it is quite awesome.”

“It was a hard battle because of the tricky conditions in the beginning and I was battling with (Anthony) Davidson in the first three laps before I could pull out a gap. I then started to overheat my inters and I feel back as the track got drier.

“We pitted early to go to slicks and then capitalised on our lead. The performance of the car was great and we were chipping away in practice and qualifying and in to the race.

“To battle for the championship is what we really want and it looks very tight at the top.”

“It’s just an honour to be here when I see these guys winning in a Porsche. To be here in Fuji and feel the atmosphere and see the fans is incredible. I’ve soaked it all up and it has been really enjoyable.

“Actually the week didn’t start off so well with a few technical issues and honestly at the start of the race Egidio drove fantastically but we had a number board that started peeling off and we had to take care of that.

“We were also I think the only Am car that didn’t pit under Safety Car so we were kind of sitting at the back of the field wondering how we were going to get through but we put our heads down and focused on running our race and before we knew it we looked up and were up there. There is no one better than Jorg to take it to the finish.”