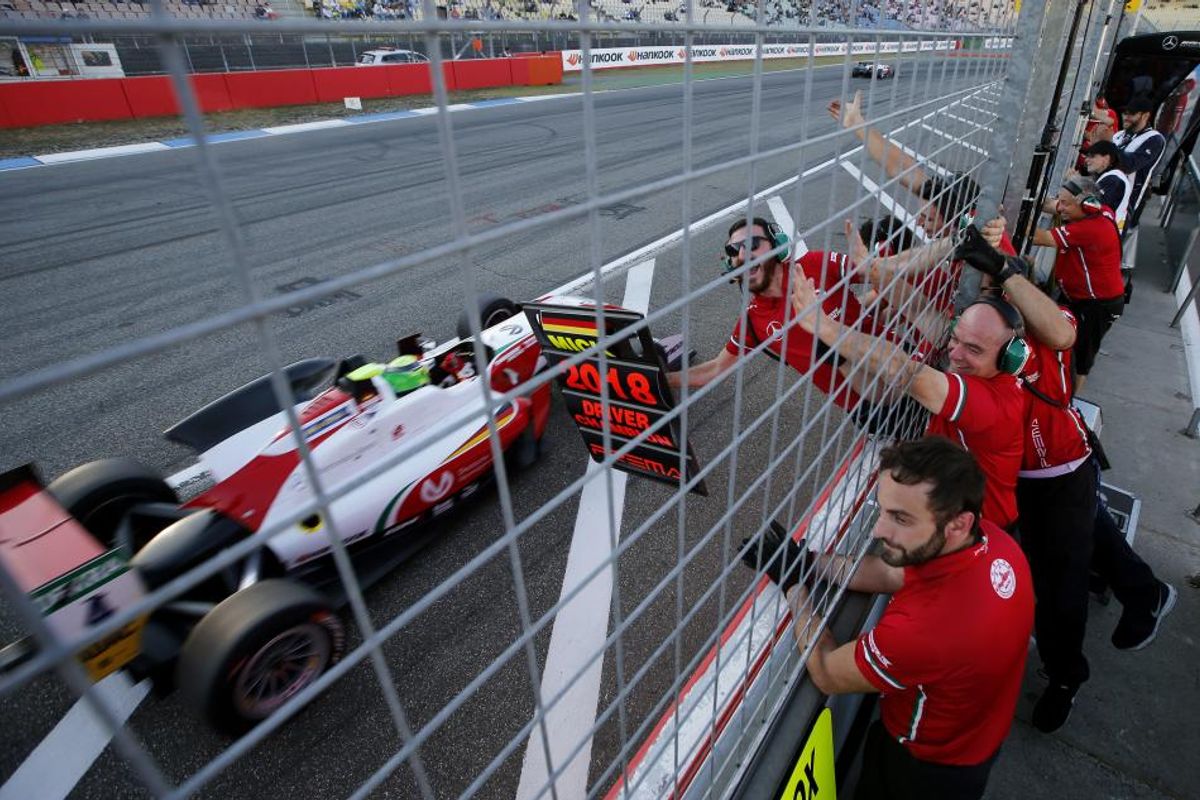 The 2018 FIA Formula 3 European Championship has been decided with one race to spare. Mick Schumacher (PREMA Theodore Racing) is beyond reach in the lead of the drivers’ standings. For the 19-year-old, finishing second combined with seventh place for his only remaining rival Daniel Ticktum (Motopark) was enough to secure the biggest success of his career to date. Victory at the 4.574 kilometres long Hockenheimring Baden-Württemberg in high temperatures went to Estonian Jüri Vups (Motopark), whose compatriot Ralf Aron (PREMA Theodore Racing) finished in third place.

At the start, Jüri Vips took the lead, but immediately found himself under pressure from Mick Schumacher. After a collision involving Enaam Ahmed (Hitech Bullfrog GP), Julian Hanses (Carlin) and Sacha Fenestraz (Carlin), the safety car was deployed. At that time, Daniel Ticktum, who had only started from 15th place on the grid, had already worked his way up to eleventh place.

After the restart, the order in the positions at the front remained unchanged. Schumacher initially put Vips under pressure for the lead, but lost contact to the rookie from the Motopark team after a driving error. After 21 laps of racing, he took the chequered flag in second place behind Vips and ahead of Aron and thus secured his most important single-seater racing title win to date.

Further down, Ticktum was able to continue his progress. The Red Bull-backed Brit finished the 29th race of the FIA Formula 3 European Championship season in seventh place behind Vips, Schumacher, Aron, Jehan Daruvala (Carlin), Robert Shvartzman (PREMA Theodore Racing) and Fabio Scherer (Motopark). Alex Palou (Hitech Bullfrog GP), Nikita Troitckii (Carlin) and Guanyu Zhou (PREMA Theodore Racing) rounded out the top ten. Race winner Vips moved up into third place of the drivers’ standings and is only 14 points down on Ticktum. In tomorrow’s final race of the season, the two teammates will be competing for runner-up position in the final standings.

Jüri Vips (Motopark): “I am very happy about this victory. I am now third in the drivers’ standings and still want to move up into runner-up spot tomorrow. In this race, I took the lead right away, but I made a little mistake at the restart and Mick was right there. When he then made a mistake himself a little bit later, I was able to pull clear and drive victory home.”

Mick Schumacher (PREMA Theodore Racing): “Of course, I am really happy with my title win. I can hardly describe what a beautiful feeling it is to be doing something that you love really well. However, I also have a great team around me that is giving me the best conditions, enabling me to concentrate on what is important. I reckon that that is one of the keys to success. Moreover, we never gave up this season and have always tried to improve further. We never stopped working on ourselves. About this race: my start was average. Until the safety car came out, I had a close fight with Jüri. After the restart, I ran wide on the first corner and lost contact to him. After that, it took a while for me to get my tyres clean again and to find back my rhythm. However, the championship party still has to wait, because there is another race to run tomorrow in which I want to give the maximum once more.”

Ralf Aron (PREMA Theodore Racing): “I started the race from eighth place and I had a good start. Moreover, on the opening lap, I was able to benefit from a battle in front of me and I was in third place after one lap already. For me, the second half of the season didn’t go to plan at all, but now, I am happy to be at least on the podium during the season finale.”

Gerhard Berger (chairman ITR e.V.): “Of course, I am happy for Mick. He has prevailed and won the title early with a podium finish by his own means today. However, I am also very happy for Michael Schumacher and I wish that he will be back with us one day to watch Mick’s future career together with all of us. Mick doesn’t only look like his father, doesn’t only have the same posture and the same walk, he even has his father’s forearms as I noticed yesterday. But the decisive thing is: particularly in the past weeks, he has proven that he has his father’s racing driver genes. When he is able to keep on delivering this performance, his career path will bring him into Formula 1.”