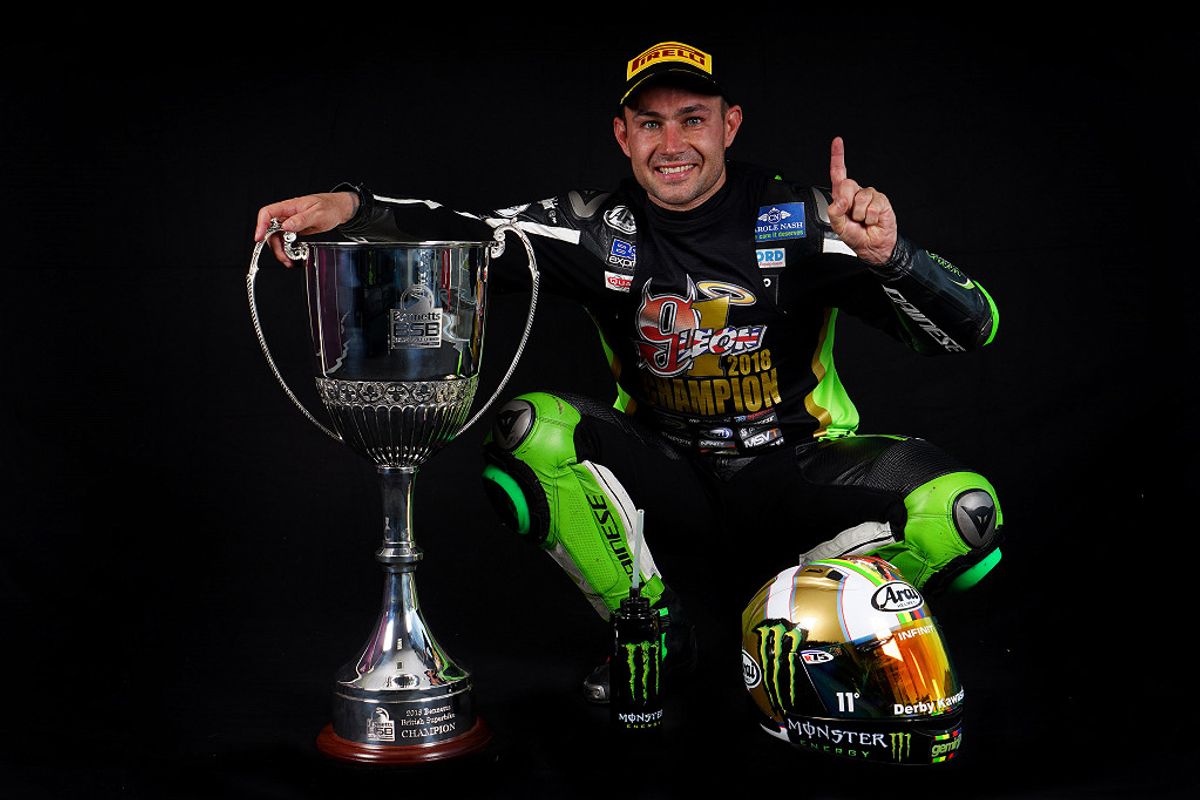 Having been crowned champions on Saturday, Haslam and the team concluded their 2018 campaign in winning style on Sunday with the Derbyshire ace claiming his 15th first-place win of the season after taking victory in the opening race of the day.

After the warm sunshine on Saturday, the Kent venue was met with wet and gloomy conditions on Sunday with Haslam lining up in sixth place on the grid. Despite the treacherous conditions, no less than six riders disputed the lead and, at one stage, only a second covered the sextet.

Positions were changing regularly but Haslam ran consistently in the top three as he often disputed the lead with Honda’s Jason O’Halloran. However, on lap 17 Haslam resumed the lead and put his head down to pull clear, eventually taking the win by two seconds from the Australian. This was his 15th of the season and the first for Kawasaki on the GP circuit.

Fittingly, the 35-year-old started the 26th and final race of the season from pole position. Although the weather had worsened by the time it got under way, he completed the first lap in fourth place. As the race wore on though, Haslam had a number of ‘out the saddle’ moments and dropped back to sixth place but with the championship already won, the final race result of 2018 had no bearing on the overall outcome.

Meanwhile, having taken 12th in Saturday’s race, team-mate Luke Mossey signed off his season with 11th place in a difficult opening race although he was forced to retire from the second which meant he ended the year in 15th overall.

The meeting also marked the final round of the Hyundai Construction Equipment British Sidecar Championship with Ricky Stevens and Ryan Charlwood taking fifth and sixth place finishes in the two races. The results placed them fourth overall in the final championship standings but second overall in the concurrently run F600 cup, an excellent effort in their first year in the 600cc capacity division.

Leon Haslam said: “It is such a crazy feeling knowing I’m British Superbike Champion; I don’t think it’s quite sunk in yet. The year has been incredible and my whole team have given me everything and the best bike to do the job on.

“It was really important to me to continue in the same team with the same people and I think it has made a big difference. Everything just went according to plan this year and it really is an amazing feeling. I can’t thank everyone enough for their continued support and belief in me to make this happen. It is so special, and I’m almost lost for words.

“British Superbikes always creates great racing and all season I’ve battled with so many different riders and it is a credit to the championship. Thank you for all the memories.”

Luke Mossey said: “This year just hasn’t gone to plan and I don’t seem to have had much luck. I’m really disappointed with how it all panned out, but these things are sent to test us and make us stronger.

“I would like to thank the entire JG Speedfit Kawasaki team for their support over the last three years and I’m sorry we just couldn’t get the results this year as we have had in the past.

“I will look forward to re-grouping and focusing on next year now and coming back stronger.”

Ricky Stevens said: “We’re a little bit disappointed with the results this weekend. In race one we were held up by a bigger engine and were unable to get past them and join the front runners.

“Today, because of the conditions we made some changes to our front and rear suspension, but it didn’t quite pay off. Despite that we’ve enjoyed two strong finishes for the end of the year, roll on 2019!

“Congratulations to Leon and the whole Kawasaki team, we’re really proud and honoured to be part of this team and can’t wait to see what next year brings.”

Team Manager Jack Valentine added: “It’s been an unbelievable weekend and I think we’ve all done an incredible job. The whole team has given everything all season and they have been rewarded by Leon becoming British Superbike Champion. So much work and dedication has gone into this year and this result is thoroughly deserved.

“We’ve had a 100 per cent race finish and that is really important to us and that is down to Kawasaki with good reliable engines and our engine builders, Dynojet UK doing a fantastic job.

“Everything has just been so good, I don’t think we could work as hard again but I’m sure we will.

“It has been so good and I am so proud of Leon and all the team. We are so pleased and thank you to everyone that has supported us and to all our team sponsors. It is a great championship and we’ve had some fantastic racing this year.

“It’s great for Leon to go to World Superbikes as British Champion. Thank you to everyone involved!”