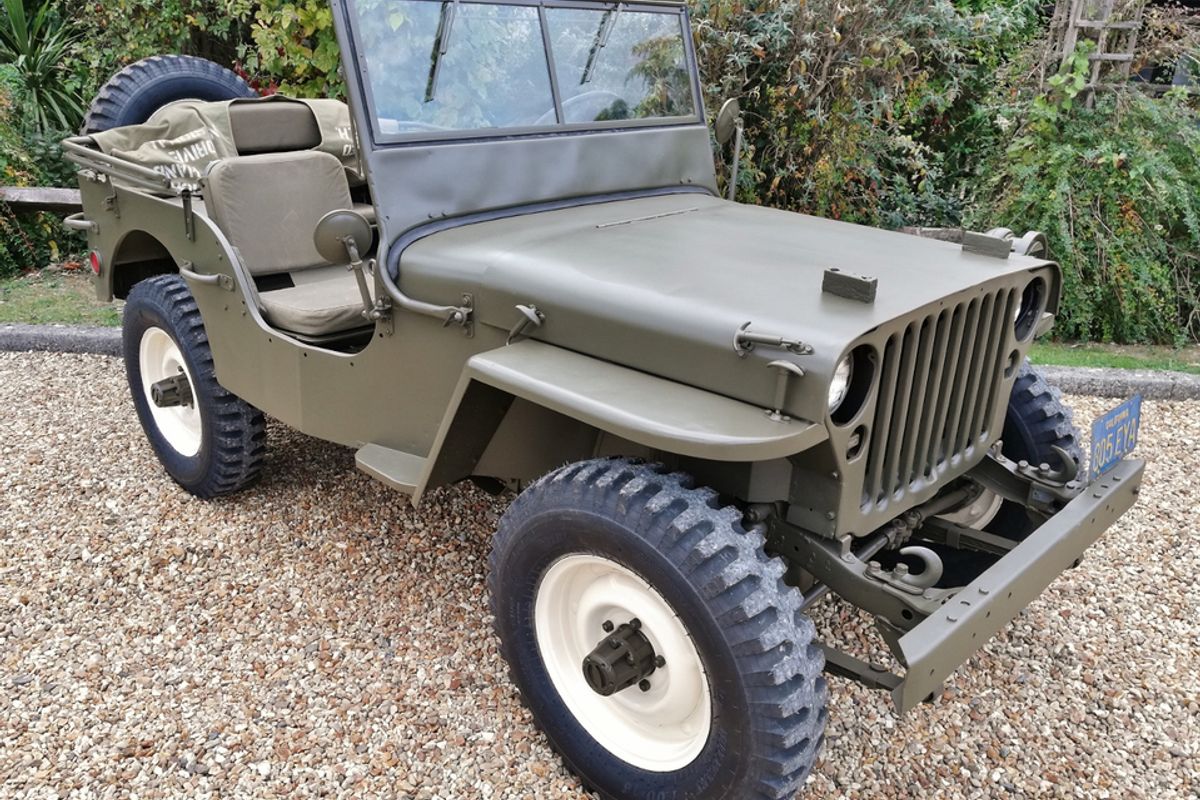 Owned by the star of The Great Escape, Bullitt and Le Mans until his death in 1980

Heading to auction at the NEC Classic Motor Show Sale on 10th and 11th November
A 1945 Willys Jeep MB once owned by Hollywood royalty and the ‘King of Cool’ himself, Steve McQueen, will be offered for sale at Silverstone Auctions’ final sale of the year at the Lancaster Insurance Classic Motor Show sale at the NEC, Birmingham, UK on 10th and 11th November.

Star of films such as Bullitt, The Great Escape and Le Mans, Steve McQueen built up a reputation as the ‘King of Cool’ thanks to his anti-hero persona in his films and in 1974 was named as the highest paid actor in the world. During his 28 year career, McQueen developed a vast car collection including the 1945 Willys Jeep MB on offer.

One of the 300,000 Willys Jeeps produced during World War II, the car on offer was first delivered to the US Army on 7th July 1945. Following McQueen’s death in 1980, the Jeep was offered at auction for the first time as lot 532 in the Steve McQueen Estate Auction at the Imperial Palace in Las Vegas on 25th November 1984.

“Steve McQueen’s reputation both as an actor and as a racing driver is historic,” says Adam Rutter, classic car specialist at Silverstone Auctions. “His love of speed and all things cars is famous. Performing many of his own stunts in Bullitt and The Great Escape, McQueen took his talent to the track competing in the 12 Hours of Sebring and the Baja 1000. McQueen even had the opportunity to combine his two passions in the 1971 film Le Mans.”

Powered by a 2.2 litre four cylinder engine with 60hp and a top speed of 65mph, the Jeep wouldn’t have been the fastest car in McQueen’s collection, but was certainly one of the most iconic. Both the Willys Jeep and Ford GPW became symbolic of WWII and would star in countless war movies, in his early movie career McQueen even appeared as a Jeep driver in the 1959 film Never So Few. The Jeep on offer even includes a special plaque denoting it as being owned by Steve McQueen and enters the auction with an estimate of £80,000 to £100,000.

Since being imported to the UK, the Jeep has been the subject of a thorough recommissioning and renovation by marque specialists and leading UK Jeep experts, Jeeparts UK, returning the car to the exacting specification as to when Steve McQueen owned it.

The car comes with the Certificate of Authenticity from the McQueen Estate Sale, the original auction catalogue from the Las Vegas auction and an original advertisement flyer. Also included are the original blue Californian license plates which are dated for road use until 31st October 1980, just one week prior to McQueen’s death on 7th November 1980.

“This car is a truly unrepeatable and unmissable opportunity for both car enthusiasts and movie fans alike and undoubtedly the star of the auction. The list of cars at the sale reads like a who’s who of the motoring world, Ferrari, Aston Martin, BMW, Mercedes, McLaren, Porsche and Jaguar, all of which are strongly represented at the sale. All eyes will be on the NEC on auction day.” concludes Rutter.

In early 1940, the United States Department of War had determined it needed a light, cross-country, four-wheel drive, reconnaissance vehicle and was anxious to have one in time for, what may possibly turn out to be, America's entry into World War II in Europe. The U.S. Army solicited proposals from domestic car manufacturers for a replacement for its existing, ageing, light motor vehicles, mainly motorcycles and sidecars, and some Ford Model Ts. Recognizing the need to create standard specifications, the Army formalised its requirements on July 11, 1940, and submitted them to 135 U.S. automotive manufacturers. It's a matter of history that ultimately two manufacturers were successful, Willys Overland Motors with their MB (US quarter-ton Army truck) and later, Ford with their GPW (in production designated GP.)

Impressively the time taken from conception and tenders being sent out, to the production lines starting to roll, was less than two hundred days, amazing for a vehicle that has stood the test of time and become an unlikely motoring icon. This ability to get things done quickly and well was the deciding factor in America being asked to produce military hardware in vast numbers and build hundreds of ships, arguably influencing the outcome of the Second World War. As the war progressed Willys Overland produced over 300,000 Jeeps and the Ford Motor Co. was drafted in to help boost production and contributed over 250,000 units.

Dubbed "The King of Cool", Steve McQueen's persona and popularity throughout the 1960s and '70s saw him star in a string of legendary films including, The Great Escape, Bullitt, The Thomas Crown Affair, and Le Mans. Known for his love of all things automotive, his collection of cars included; a Ferrari 275 GTB/4, a Jaguar XKSS, and a Porsche 911S. We are incredibly pleased to offer this Willys Jeep, delivered on 7th July 1945 (as stamped on the data plate), which was formerly part of Steve McQueen's vast car collection. This Jeep was sold as Lot 532 at the 'Steve McQueen Estate Auction' on 24th - 25th November 1984 at the Imperial Palace in Las Vegas, Nevada, to a lucky bidder, a Mr J. McClughan of New Braunfels, Texas for $6,000, some ten times the going rate for a WW2 Jeep.

It is being sold with the Bill of Sale signed by Kenneth Zifferen, Co-Trustee of the McQueen Children's Trust, the Certificate of Authenticity from the Steve McQueen Estate Sale in Las Vegas, the original auction Catalogue from the Estate Sale, and the original advertisement flyer. Our vendor purchased this from Mr McClughan's estate who we believe was the third owner after the US army and Steve McQueen. The original blue Californian license plates are also included in the sale and are dated for road use until 31st October 1980 indicating the Jeep was available for use right up until Steve McQueen passed away only a week later.

Since being imported to the UK, this important Willys Jeep has been renovated and fully recommissioned exactly as it would have been in McQueen's ownership by marque specialists and leading Jeep experts, Jeeparts-UK Ltd. It is supplied with a NOVA reference number, an application for first registration has been made to the DVLA and expected that a UK V5c will be available at time of sale. Full EU and UK taxes have been paid. It will also arrive at the sale with an MoT and a dating certificate from the Military Vehicle Trust. This fabulous motorcar offers superb provenance and is an unrepeatable opportunity to acquire a significant Willys Jeep once owned and driven by the coolest man in Hollywood