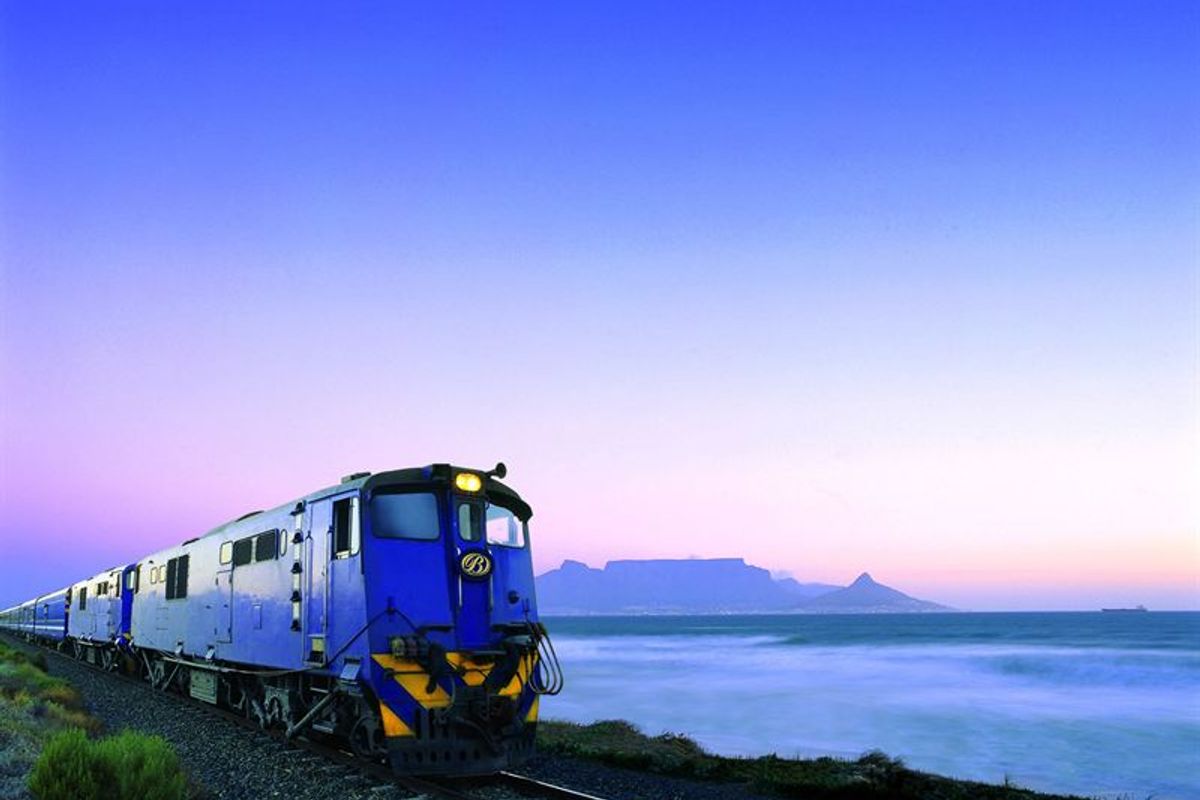 As time meandered from the 19th Century towards the dawn of the new era, a dream was born. A dream of harnessing steam technology to link Africa’s vast south to north, around the awe-inspiring mountain ranges that dot the continent, through the apparently arid desert landscapes, over untamed savannah grasslands teeming with wildlife. From the Cape all the way to Cairo… all of this on parallel lines of tempered steel.

It is from this dream that The Blue Train was born. Cairo was never to be, but the dreamers persevered and The Blue Train now traverses South Africa and its breath-taking scenery in a manner that befits the mystique that has grown around it.

Kings and presidents have indulged on this magnificent, moving five-star “hotel-on-wheels”. From love-struck honeymooners, to adulated celebrities. And even ordinary folk who fantasize about a life of spectacular luxury, a life that has seemed tantalizingly out of reach. Until now…

For the Empire-builders of old, the uncharted African interior was the landscape of a dream in the making. A dream that would etch its course in parallel lines that snaked their way northward from the Atlantic shoreline, conquering the distance from Cape Town to Cairo. The dream was not to be, as the Great African Railway reached only as far as a bridge across the gorge of the Zambezi River, overlooking the thundering smoke of the Victoria Falls.

But in the fading years of the 19th Century, the discovery of gold and diamonds drew thousands to the edge of the continent, and those lines of tempered steel began to bear the burden of industry, commerce, and society on the move. Soon, as the moneyed classes made their presence felt, the network added leisure travel to its list of duties, and in the slipstream of leisure came luxury. The Union Limited and Union Express, ferrying passengers between the mailships of Cape Town harbour and the goldfields of the Witwatersrand, were the standard-bearers of steam-powered opulence in the easy-living heyday of the 1920s, boasting everything from card tables to ceiling fans, to hot and cold water on tap.

A coat of royal blue and cream would later give the trains their distinctive livery, and it was from this line, in these shades, that The Blue Train – a “Palace on Wheels” – would ride the rails to legend. Withdrawn from service during the dark days of World War II, extensively refurbished and modernised in the Seventies and Nineties.

In 1997 a new Blue Train was introduced and its traditional route between Cape Town and Pretoria was extended northwards to the Victoria Falls. In the following year a second identical train came into service, allowing The Blue Train to add to its destinations Hoedspruit on the western edge of the Kruger National Park, and Port Elizabeth at the eastern end of South Africa’s Garden Route.

The Blue Train has defined a new era of luxury travel, making the switch from steam to electric and diesel, linking veld to sea, tradition to progress, with a sense of style, grace, and mesmerising power that has never come close to being matched..