Will you be chasing the Fluffy Stuff this winter 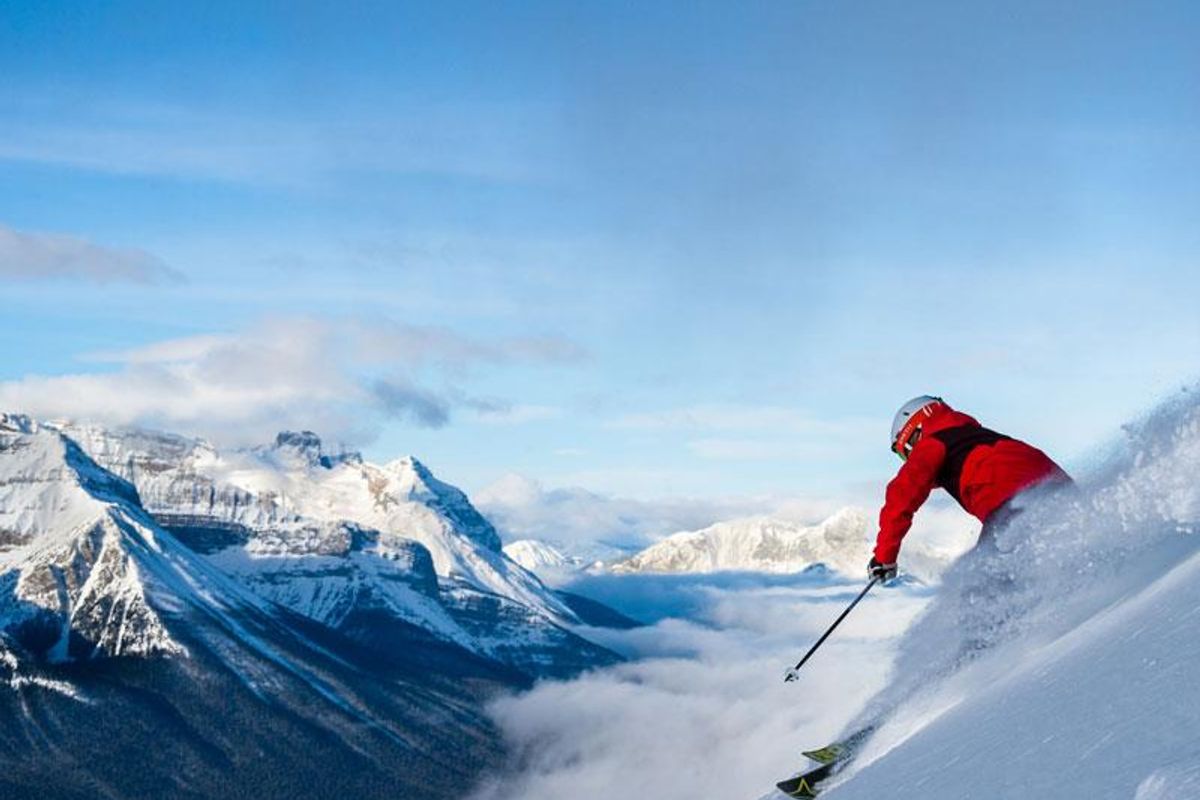 Watch some of the best Ski Films and Snowboard Films in full length, HD and for FREE

The best ski films always incorporate park rats sending it off monster kickers, retro backcountry snowboards dressed as unicorns or beautifully produced mountainous shots that leave you breathless. These free ski movies will make you want to head to the mountains!

Matchstick Production created this award-winning approach that saw the world’s greatest skiers poking fun at themselves and the industry as a whole. It’s the last feature-length film to star Canadian skiing icon Shane McConkey before he died in a base jump ski accident in 2009. A scene set to The Final Countdown sucks you into the high octane spirit of the movie when all the riders fist pump after stomping a high landing.
This is surely one of the best ski films ever!

Adrenaline junkie Warren Miller offers an invigorating blend of breathtaking adventure and fascinating documentary as he travels the globe to deliver the most spectacular skiing and snowboarding footage ever captured on camera in 2005.
This is another classic to sit down and enjoy one evening with your ski friends.

Another Matchstick Production classic. Get ready to cry with laughter at the brilliant jokes on the ski industry and modern day freestyle skiers and boarders.
“Attack of La Niña” will transport you to Colorado, Alaska, British Columbia, Washington, California, and many other world-class destinations.
You know it’s going to be a great film when the ski crew selected is huge! Best Ski Films need a strong crew.

G.N.A.R (2011) Full Film – 1h 09m
Squallywood, Shane McConkey, and how to prove that you’re the best skier on the mountain. All in one movie.
Firstly, what is GNAR? It’s a shortened version of the word gnarly, meaning high on the scale of dangerousness and coolness.
The basic premise of the game of G.N.A.R. is to score as many points as possible in a designated period of time by attempting lines, acquiring extra credit points (ECPs), and earning bonuses.

Most importantly, it reminds us to stop taking everything so seriously, and to ski for the reason, we all started in the first place: fun. Seems like that’s how McConkey would have wanted it.

This is Home – Faction (2017)
The Faction Collective as they return to their homes around the world to show us how they get it done on home turf. From Europe to the US and back again – via old playgrounds, new challenges, secret spots and favourite lines – THIS IS HOME chronicles what it means to be a freeskier today: where the conditions are what you make of them, and the search for that perfect ride starts in your own backyard.

Curt Morgan and Travis Rice create the world’s most progressive snowboard film by combining cutting-edge cinematography, stunning locales, and the best freestyle snowboarding ever captured.
It has jaw-dropping footage with a pulse-pounding soundtrack, shot in some of the most rugged, remote and beautiful snow countries on the planet.

Sweetgrass Productions shot their first night segment in Japan five years ago for their film Signatures. Like a lot of night segments, the terrain was a low angle and the shots focused on small features.

To light up the mountains in British Columbia’s Golden Alpine Holidays and Alyeska, Alaska, Sweetgrass had to power 30,000 to 40,000 watts of electricity. For comparison’s sake, a household lightbulb contains 60 watts. The pscychadelic night segment in Valhalla, which mainly consisted of short pillow shots and backcountry booter airs, required 2,000 watts.
This required a lot of helicopter assistance but was it worth it.. watch and see for yourslef.

Follow elite skiers Erik Guay, Aksel Lund Svindal, Max Franz, and Hannes Reichelt through 12 emotionally charged months as they train for the world’s most dangerous downhill ski race, the Streif.
This film really shows the hard work and pain they go through to get to the top.

Few Words – A Candide Thovex Film (2015) Full Film HD – 0h 59m
Shot in Europe and Alaska, it follows Thovex’s career as he climbs to the very top of his sport, including two gold medal wins at the X Games golds, his 2010 win at the Freeride World Tour, and a devastating back injury which threatened to end his career… Candide has got to be my all-time favourite skier, watch it and you will understand why…

Torstein Horgmo – Horgasm: A Love Story (2015) Full Film HD – 0h 35m
Torstein Horgmo’s mockumentary biopic certainly offers something different. Watch it and let us know what you think of it. Does the humour work? Is the run of the mill part-based shred flick dead? Would be interested to know your thoughts…

Passenger Redbull (2015) Full Film HD –  1h 40m
For some, winter is the only time of year that truly matters, and skiing fresh snow is a life’s pursuit. From Japan to Europe to North America, this romantic look at the endless quest for powder highlights some of the best skiing on the planet.  Click here to watch the full video

Guilt Trip | Salomon (2016) Full Film HD –  37m
The only thing greater than this group of skier’s desire to claim a first ski descent on Greenland’s second highest peak is the size of their carbon footprint to get there. Loaded with guilt, they decide to bring along renowned glaciologist, Alun Hubbard, who’s scientific hypothesis, if proven, could rewrite popular projections of global sea-level rise. However, the entire expedition is put in question when they arrive in Greenland and discover their objective is beyond the range of all available aircraft. Shot on location in Greenland.

Follow a group of the world’s most talented skiers and snowboarders on an intense trip through exotic destinations in Norway, Sweden, Canada, USA and New Zealand. Spectacular nature footage mixed with progressive skiing and snowboarding. Click here to watch the full video

Skiing Jaws| Redbull (2017) Full Film HD –  24m
Okay so you might be thinking; “This isn’t skiing, this is surfing?!” Yes, you are somewhat right, but have you ever seen someone skiing a wave?

At the legendary Jaws in Maui, big-wave surfer Chuck Patterson is ready after years of hard work to unveil his prototype for Surf Skis, which he hopes will revolutionize his sport and make a splash at one of the world’s most powerful waves.

Click here for Powderwhite to watch them all - for free