Sporting and Elegant BMW 327/28 at the Scottsdale Auction 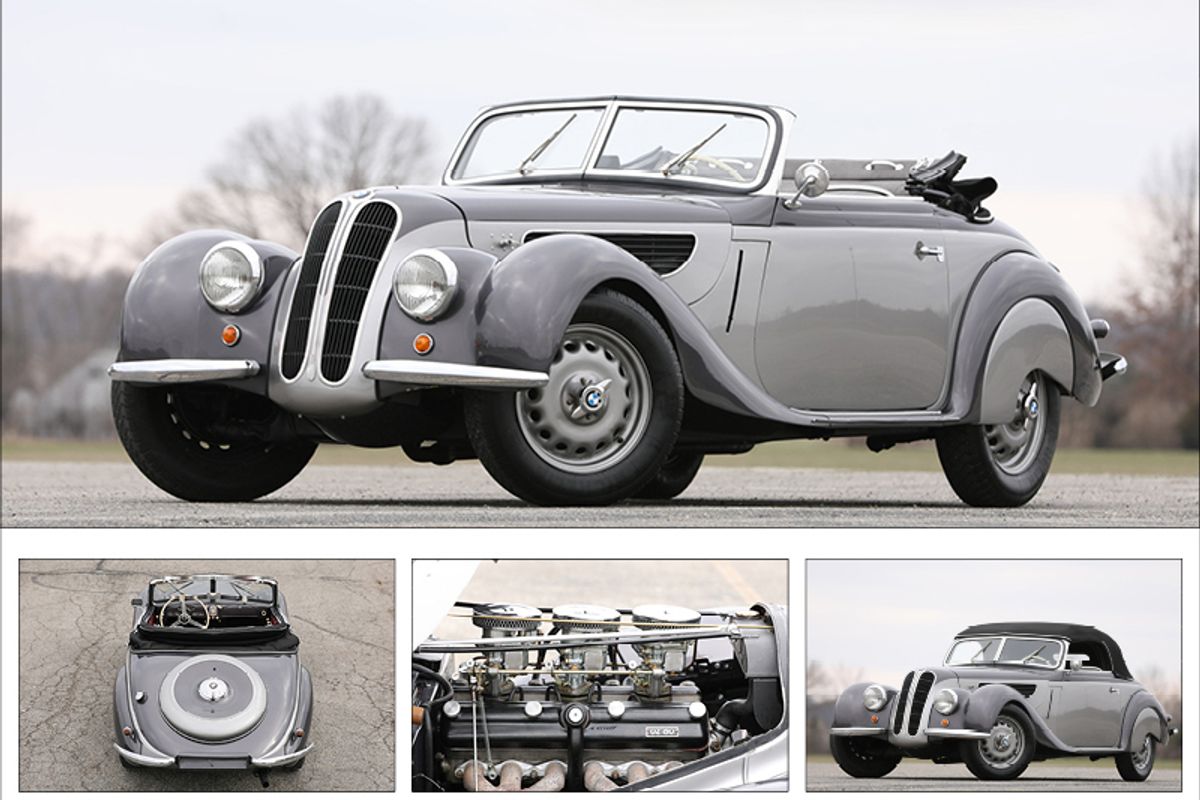 Offered Without Reserve by Worldwide Auctioneers From The Tom Gaughen Collection

They Say:
Without doubt, one of the finest cars from prewar Germany was the elegant yet sporting and, arguably, perfectly proportioned two-seater BMW 327 Cabriolet. Set on a 108-inch wheelbase chassis and featuring sweeping pontoon fenders, a long nose with short rear deck, split front windshield, and laid-back twin-element grille, it was pleasing from any angle. Perhaps the only thing better than looking at a 327 was driving one. Production began with the cabriolet, which debuted in November 1937, followed by a coupe from October 1938, with just 1,396 built in all.

If the 327 was coveted, committed driving enthusiasts were thrilled by the debut of the higher-specification 327/28, so designated in recognition of its 80-horsepower BMW 328 triple carb engine. The significance of this two-litre inline six cannot be overstated. Sharing its basic cylinder block with BMW’s other two-litre models including the 327 and 326, the 328 engine would continue in service after war’s end, powering the BMW 501 series. The architecture of the 328 engine captivated British engineers who encountered it as well, with England’s Bristol producing a copy that powered its high-end saloons and touring cars. During the early 1950s, this basic power unit propelled a succession of definitive sports cars that dominated road racing during the era, including the John Tojeiro-designed AC Ace, and American entrepreneur Stanley “Wacky” Arnolt’s coachbuilt line of sports and racing cars.

Priced at a premium of 630 to 650 Deutschmarks over the basic 327, depending upon the body style selected, the 328-powered BMW 327/28 was introduced in October 1938 and available for purchase to 1940, with the handful of cars built after the September 1939 outbreak of WW II in Europe delivered to foreign buyers. Performance was elevated considerably over the 327, with its brisk performance envelope including a true 140 km/h (87 mph) top speed, along with stronger acceleration and the sophisticated handling characteristics to harness its newfound power. Available as a sleek coupe and dashing open-air cabriolet, the BMW 327/28 continues to be renowned as one of the finest prewar touring cars produced on either side of the Atlantic. Just 569 of these beautiful performers were built in all.

According to its corresponding Zertifikat supplied by the BMW Group Archiv in Germany, this BMW was finished in grey, produced during July 1938, and delivered on July 21, 1938 to Ernst J. Henne in Munich. Having received his 327/28 before the model was even publicly introduced, Mr. Henne was an obviously important client to BMW; in fact, he was a very famous BMW works racing driver who also enjoyed considerable success with motorcycles as well and scored at least two notable victories at the wheel of BMW’s then-current 328. This Cabriolet was known to have remained in Germany until the late 1970s. Subsequently, it was sold to Belgium where it was eventually purchased as a barn find in the 1980s and then stored until the mid-1990s, when the owner commenced a full restoration. Early in the 2000s, a French coachbuilder restored the entire wooden body framing and then restored the body itself. In 2007, the car was road-registered again in Belgium, and would eventually be acquired by the consignor, a selective collector of great prewar classics. Featuring a beautiful yet understated color combination, knock-off wheels, a top-quality black cloth top, soft supple leather upholstery, a firewall mounted tool kit and all the fine details one expects of such a rare and coveted automobile, this 1938 BMW 327/28 Cabriolet remains very appealing and continues to benefit from the restoration. Simply put, it is a wonderful and fascinating example of one of the most sophisticated touring cars of the immediate prewar era.