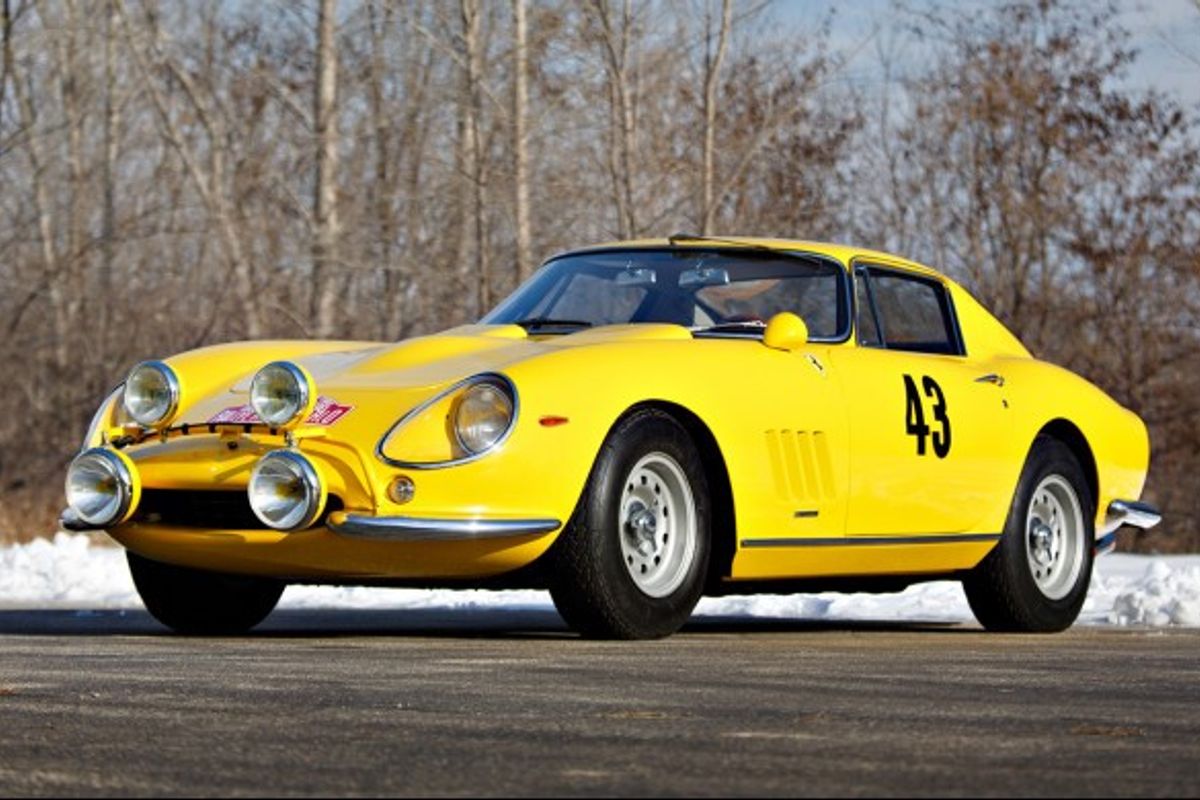 An Important, Landmark Ferrari – the First 275 GTB Built
Factory Prototype Retained for Testing and Development Purposes
Developed for Rallying by the Ferrari Experimental Department
Raced by Giorgio Pianta and Roberto Lippi in the 1966 Monte Carlo Rally
A Fixture in a Major Private Collection and Unseen for the Past 25 Years
History and Provenance Documented by Ferrari Historian Marcel Massini

THIS CAR
Introduced in 1964, the Ferrari 275 GTB was the much-anticipated successor to the 250 GT SWB Berlinetta. From a technical perspective, the new berlinetta represented a major leap forward for Ferrari, employing many features developed from the Le Mans-winning 275 P competition cars.

At the heart of the 275 GTB was the 3.3-liter tipo 213 engine, which was larger and more powerful than the earlier 250-series V-12. The car’s chassis was constructed in the traditional Ferrari manner, but incorporated a rear-mounted transaxle, independent rear suspension, and cast alloy wheels – all firsts for a road-going production Ferrari. Like its predecessor, the 275 GTB featured attractive coachwork penned by Pininfarina and constructed by Scaglietti.

Beautiful and fast, with state-of-the-art engineering, the 275 GTB evolved during its four-year production run, spawning several variations: short- and long-nose two-cam models, four-cam berlinettas, and NART spiders, as well as a limited number of purpose-built competition models. Today, the 275 GTB and its variants are undoubtedly among the most revered, collectible, iconic, and valuable Ferraris of all time. The example presented here, chassis 06003, is the foundation for the entire 275 GTB program – it was the very first example built and served as Ferrari’s prototype and development car.

As recorded in the Ferrari factory’s Foglio Allestimenti, 06003 is the one and only 275 GTB “Prototipo” and appropriately carries assembly sequence no. 1.Constructed in 1964, 06003 was completed in the original short-nose body style and fitted with one of the earliest tipo 213 engines. Factory records note the original color combination as Giallo Prototipo (Prototype Yellow) over black upholstery, although a note on the delivery sheet states “cambieto veloce; Rosso Cordoba” – indicating that it was repainted Rosso Cordoba at some stage.

Ferrari retained this prototype through spring 1965, using it as an experimental test bed for the new model. During this period, 06003 was photographed for promotional use and its chassis and engine numbers are listed on the FIA’s Scheda di Omologazione papers for the 275 GTB. The prototype also underwent numerous revisions that would eventually be introduced into production cars. Most notably, the coachwork was updated in the long-nose style, which became standardized after approximately 250 cars were built.

According to Automobile Club d’Italia records, the certificate of origin was finally issued for 06003 on April 30, 1965, and it was officially sold to SEFAC S.p.A. on May 7, and the prototype 275 GTB was sold to its first private owner, Pasquale Ramera of Coccaglio, Italy. That November, 06003 returned to Ferrari, where it was serviced at the factory’s assistenza clienti department and then registered in Modena as “MO 129151.” At this point, the prototype 275 GTB was in the midst of being prepared for a fascinating new chapter as a factory-supported rally car.

The exact circumstances that led to this unusual adventure remain something of a mystery, but it is understood that Ferrari’s racing manager, Eugenio Dragoni, and managing director, Ugo Gobbato, had a desire to test the 275 GTB in a rally and gather technical information on the model’s innovative new features, namely its transaxle and independent rear suspension.

For this unique project, Mr. Dragoni enlisted the services of Ferrari factory test driver Roberto Lippi and rally driver Giorgio Pianta, who had been a member of Lancia’s HF Squadra Corse. Meanwhile, 06003 and another 275 GTB, chassis 07927, were tested and prepared by Scuderia Ferrari driver Mike Parkes and the factory’s experimental department. During this process, which involved some 12,000 km of test driving, 06003 was equipped with special rally equipment including auxiliary driving lights, reinforced glass, a 75% locking differential, radiator blind, modified hood, and a third windscreen wiper. Two types of Dunlop tires were also tested, along with Finnish Rengas Alas tires.

In January 1966, 06003 was entered in the 35th annual Monte Carlo Rally, the most prestigious event of its kind in the world. The Milan-based racing team Scuderia Sant’Ambroeus – co-founded in 1951 by Mr. Dragoni – was the official entrant for the Ferrari. Although the 275 GTB was not an official factory entry, it was supported by Ferrari’s assistenza clienti, which provided two breakdown vans – one driven by Lorenzo Bandini and the other by Giampiero Biscaldi.

Wearing No. 43, the 275 GTB embarked on the grueling Monte Carlo Rally with Pianta driving and Lippi navigating. The incredible sight of the yellow 12-cylinder Ferrari berlinetta on the snow-covered mountain roads must have come as a great surprise to most entrants and spectators, and the photographs captured are among the most memorable images of any competition Ferrari.

Sadly, driveline issues forced the Ferrari to retire near Nyons, though it had proven quite effective in rally competition until that point. In an interview published in a 1991 issue of Ferrari World, Giorgio Pianta recalls his experience driving 06003, remarking that it was “the most beautiful memory of my life.”

“The car was extremely well-balanced on both snow and tarmac and was surprising, because it reached in seconds speeds which for that time were incredible.…I can only say that when I drove the rally Ferrari, that car was a dream for me – at that time it seemed perfect. I honestly can’t remember anything that wasn’t beautiful about that car. The braking was perfect, the tuning.…Even with all the experience I have now as a test driver of rally cars for Abarth, I couldn’t say what more they could have done!”

After the Monte Carlo Rally, 06003 returned to the Ferrari factory several times during 1966 for servicing. In April 1967, ownership transferred to Loredana Pozzi, and two months later the Ferrari was sold to Marco Olmi of Marina di Massa. The car then passed between several residents in the Tuscany region until 1971, when it was sold to Salvatore Ciavarisso of Trapani, Sicily. Two subsequent Sicilian owners followed and, in 1973, the 275 GTB was sold to Neil Empson, a New Zealander who had been trading used Ferraris and Maseratis to support his wine export business.

Following Mr. Empson’s ownership, 06003 was exported to the US and, by 1977, was owned by Henry Fuchs of Evergreen, Colorado. In 1989, the 275 GTB was discovered by dealer Nick Harley and sold to Swedish collector Hans Thulin. When Mr. Thulin’s real estate business went bankrupt in 1991, his extraordinary collection of Ferraris was sold and 06003 returned to the US, where it was offered for sale through Beverly Hills exotic car dealer Mille Miglia Inc.

In fall 1992, noted collector Charles “Chuck” Wegner purchased 06003 from Ferrari of Los Gatos and, in 1993, debuted it at the Cavallino Classic in Palm Beach, Florida. In 1994, Mr. Wegner sold the 275 GTB to the current owner, thereby joining one of the most significant private collections of Ferraris ever assembled.

Today, this car appears very much as it did when it competed in the Monte Carlo Rally in January 1966 and, importantly, it retains its matching-numbers engine, stamped 06003 with corresponding internal no. 04/64. Other interesting details include a Sicilian dealership sticker on the rear window dating from the 1970s and various chalk marks and stampings found throughout the car that attest to its unique status as the first 275 GTB built.

Although it features prominently in numerous books and publications, 06003 has been kept out of the public eye for decades. In fact, this Ferrari has not been exhibited in the past 25 years and has never been shown at major international concours such as Pebble Beach or Villa d’Este. It will require mechanical attention before use, but for the collector searching for a worthy candidate to debut at the world’s finest motoring events, this unique and historically significant Ferrari is an ideal choice.

As the prototype for the iconic 275 GTB and the first example ever built, 06003 will always maintain an important part in the history of the Ferrari marque. That it went on to be developed by the factory’s experimental department, tested by famous drivers, and specially prepared to compete in the legendary Monte Carlo Rally make this car all the more appealing. Without question, this one-of-a-kind 275 GTB is one of the most fascinating, charismatic, and distinctive Ferraris of all time. Gooding & Company is delighted to present this important automobile at public auction for the first time in its history.