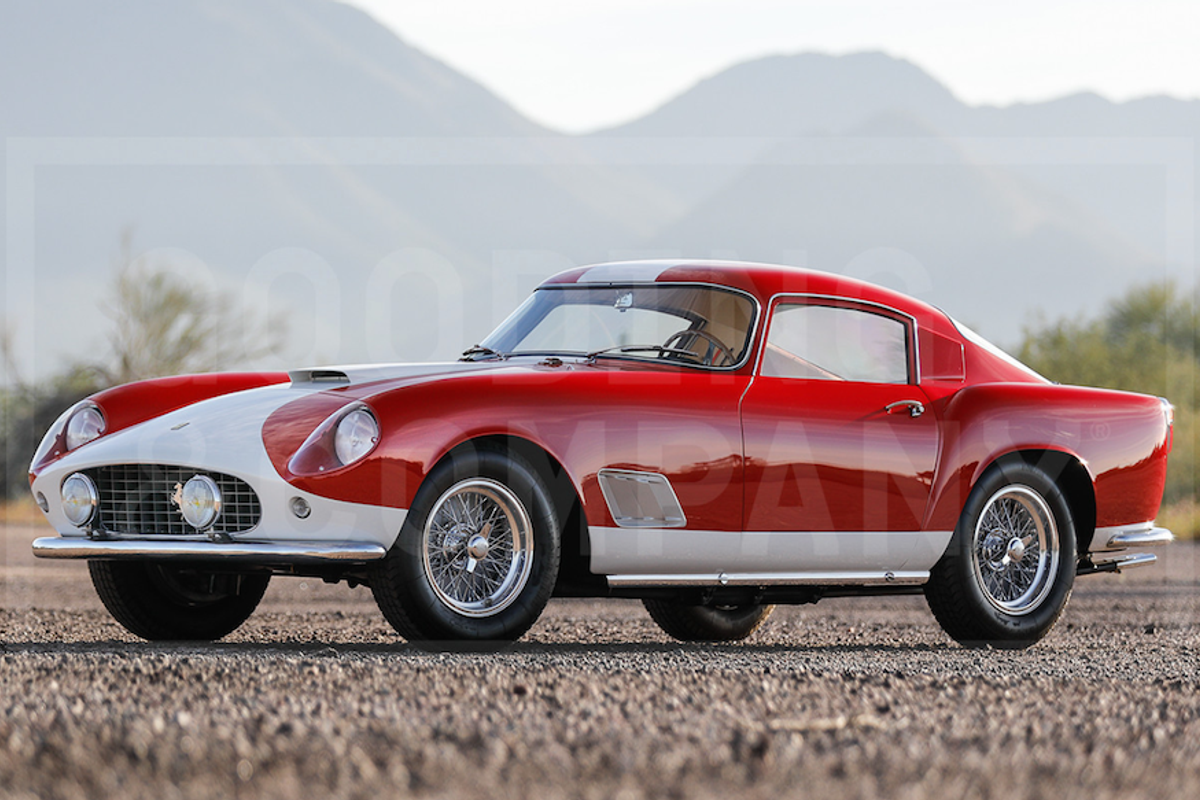 In 1956, Ferrari responded to the FIA’s new GT class championship with a dual-purpose road-racing model based on the 250 GT chassis. With lightweight aluminum coachwork by Scaglietti and a competition-tuned version of the three-liter Colombo V-12, the 250 GT Berlinetta was a potent force in sports car racing through the late 1950s. The new Ferrari proved to be particularly dominant at the multi-stage Tour de France Automobile, which it won four consecutive years from 1956–59. Appropriately nicknamed the Tour de France (TdF), 78 examples of the 250 GT Berlinetta were built in four distinct body styles – no-louver, 14-louver, three-louver, and single-louver – with corresponding mechanical updates that improved performance and reliability.

Over the past six decades, the 250 GT Tour de France has evolved into one of the most desirable classic Ferrari models. Marrying advanced engineering with magnificent design aesthetics, the TdF achieved a fantastic competition record and left an enduring influence despite its relatively limited production run.

The Tour de France presented here, chassis 1037 GT, is the 19th of 36 examples built by Carrozzeria Scaglietti in the attractive single-louver body style, and it is among an even more exclusive group that features the desirable covered-headlight arrangement. The attractive all-aluminum bodywork was originally finished in a distinctive white livery, complemented by chromed Borrani wire wheels and black upholstery.

Upon completion, 1037 GT was shipped to Carlos Kauffmann, the official Ferrari distributor in Caracas, Venezuela, and sold to its first owner, Julio Pola. He was born in Spain and raced sports cars in Europe during the late 1940s and early 1950s before relocating to Venezuela. There, he established Escuderia Madunina Venezuela, the country’s preeminent racing team, which raced a variety of Ferraris, Maseratis, and Mercedes-Benz, generally painted white with a central red-blue-yellow stripe. A successful driver in his own right, Pola won the first Venezuelan National Drivers’ Championship in 1958.

In November of that year, Pola debuted 1037 GT at the Grand Prix of Venezuela, an open-road race that ran from Palmarejo to Caracas, covering some 755 km. The race attracted internationally renowned drivers including Gino Munaron, Jo Bonnier, and Jean Behra, who finished 1st in a Ferrari Tour de France. Pola drove 1037 GT to 2nd Place, crossing the finish line in four hours, 55 minutes – just 10 minutes behind Behra. In the process, he recorded the fastest time between Valencia and Caracas, covering the distance in 52 minutes at an average speed of 174.61 kph.

The first event of the 1959 season was the Caracas-Cumaná-Caracas race, in which Pola drove the Ferrari to a solid 4th Place finish despite mechanical troubles. In March, 1037 GT was entered in the Grand Prix of Trinidad and entrusted to fellow Venezuelan driver Ettore Chimeri. Wearing race No. 117, the car finished behind the 250 Testa Rossas of Mauricio Marcotulli and Lino Fayen for a 3rd Overall and 1st in Class result. Pola’s final race in the TdF was the Premio Ciudad de Cabimas in June, where he placed 3rd Overall.

Soon after this race, Pola sold 1037 GT to José Miguel Galia, a modernist architect and amateur race car driver. In August 1959, Galia finished 2nd Overall in the Circuito de la Ciudad Maracaibo, but failed to finish the Carrera Bogotá-Caracas held in February 1960. Following this event, Galia purchased a 250 Testa Rossa, and the TdF was eventually sold to Mauricio Marcotulli and then passed to Felix Varona, the mechanic for Escuderia Madunina.

In the decades that followed, the Ferrari was converted to an open-headlight arrangement, repainted silver, and retired from active use. In 1987, California-based Ferrari specialist Michael Sheehan discovered 1037 GT in Caracas and purchased it from José Carlos Hart Deneke. During transport from Venezuela to Miami, the TdF’s front end was damaged in the shipping container, and the project eventually was sold, in January 1989, to Australian Ferrari collector John Maher.

During Mr. Maher’s ownership, 1037 GT was treated to a complete restoration in New Zealand, during which it was carefully returned to its original coveredheadlight configuration and finished in red over tan. Once completed, the Ferrari was sold to Dutch classic-car dealer Jaap Braam Ruben who, in turn, sold it to Pierre Fandel of Bitburg, Germany. In 1998, Axel Urban acquired the Ferrari and campaigned it in several historic races before selling it to a private English collector.

In 2002, John Siroonian, a discerning Ferrari collector based in Newport Beach, California, acquired 1037 GT. Eager to share his latest acquisition, Mr. Siroonian displayed the Tour de France at several concours events, unveiling it at the Ferrari Club of America National Concours held in Los Angeles that May. Over the next two years, the TdF was shown at Concorso Italiano and the FCA International Concours, earning Silver and Platinum Awards.

Since Mr. Siroonian’s passing in 2008, his family has continued to preserve and enjoy his exceptional collection of Ferraris, entrusting them to marque specialist Brooke Betz in Orange, California, for regular maintenance. In June 2014, 1037 GT was certified by the Ferrari Classiche Department, who confirmed it as an authentic example, retaining its original chassis, bodywork, engine (internal no. 036D), gearbox (internal no. 5D), rear end (internal no. 47D), and other major components. Notably, the Ferrari is accompanied at auction by a spare 250 GT engine, numbered 1027 GT with internal no. 020D. The car is also offered with a file of supporting documentation including copies of the factory build sheet, a selection of photographs, the Classiche Red Book, and a report compiled by Ferrari historian Marcel Massini.

As a late-production single-louver Tour de France Berlinetta, 1037 GT represents the ultimate evolution of one of the most beloved models in Ferrari history. This car is all the more desirable, given its fascinating early history in Venezuela, where it was owned and raced by some of the country’s foremost motor sports personalities. Since its high-quality restoration was completed in the early 1990s, this TdF has been thoroughly enjoyed on the road, track, and concours lawn. It presents beautifully in all respects, a testament to the high quality of the initial restoration and the devoted efforts of its current caretaker.

While any 250 GT Tour de France is regarded as a top-tier collector car, this exceptional example, certified by Ferrari Classiche, is a star among the best of them.