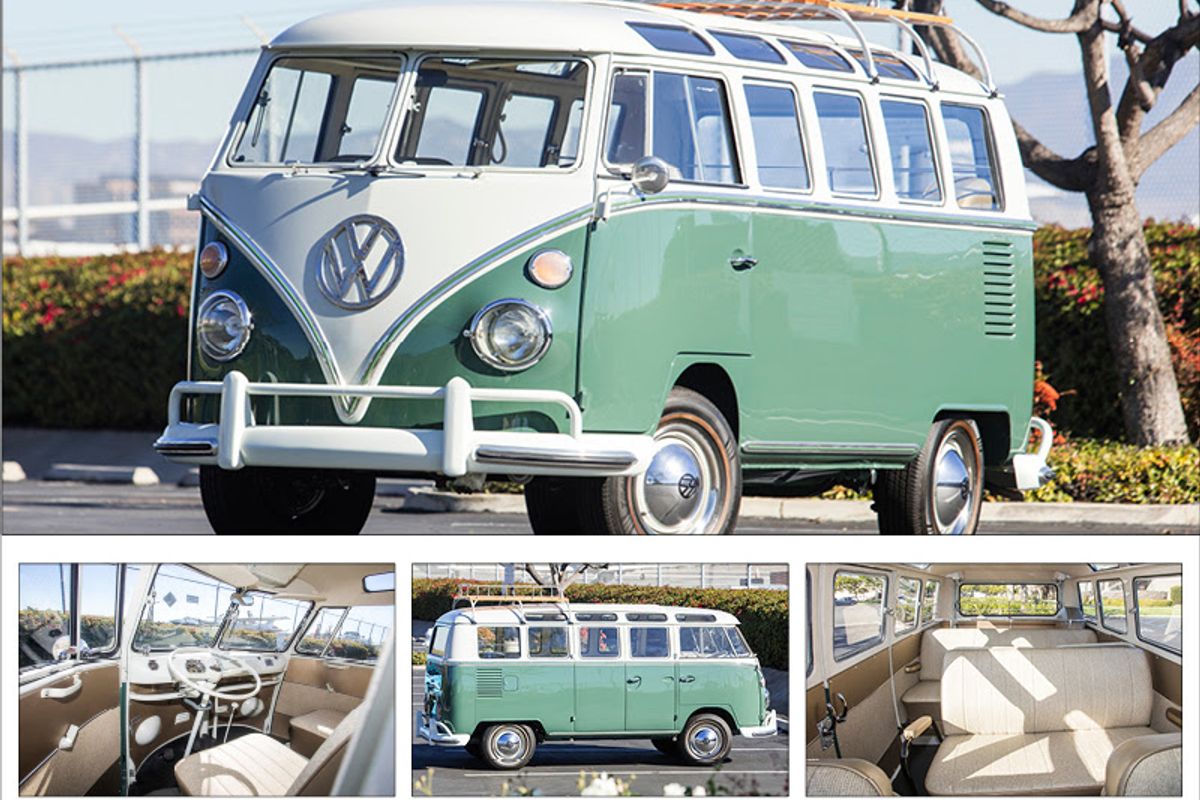 They Say:
The Volkswagen Transporter, otherwise known as the Bus, Kombi, or Microbus, was initially designed by Dutch Volkswagen importer Ben Pon, who pitched the idea to Volkswagen executives while visiting the Wolfsburg plant in 1947. In May 1949, Heinz Nordhoff, newly appointed Chief Executive Officer of Volkswagen, approved production. A mere six months later, the first VW Type 2 rolled off the assembly line. The first two models, the “Kombi” and “Commercial,” would be joined by the “Microbus” in 1950 and the “Deluxe Microbus” in 1951. Many additional models, such as an ambulance, utility pickup, and panel van would soon follow. In 1964, a wider rear door was added to the Deluxe and Sunroof Deluxe versions. This cut out two windows from the rear of the vans, bringing the number of windows in the Deluxe down to 13 and the Sunroof Deluxe to 21. The 23- and 21-Window variants each carry the unofficial nickname “Samba,” in keeping with their fun and festive character.

The Volkswagen Samba was the most luxurious of the Type 2 lineup. When it arrived on American shores in 1949, it was an instant hit, as the public had never seen anything like it before. Many of the components used in other Volkswagen vehicles, including the “Beetle,” were interchangeable with the Samba Bus. This also meant that parts were easy to come by, common, and relatively inexpensive, allowing these vehicles to serve as a cost-effective means of moving small groups of people efficiently and in comfort. These unique transporters weathered their way through the decades, adapting with remarkable ease throughout the changing of America’s cultural identities. Economical and practical with a uniquely avant-garde look made these vans quite popular with youngsters who were seeking to rebel against the establishment. The box-like overall design of these vehicles was also perfect for use as giant, moving canvases adorned with everything from peace signs and flowers to psychedelic murals.

The delightful California Volkswagen presented here represents one of the very best of its kind. It is the product of a complete restoration with virtually no conceivable expense spared, by noted VW marque experts in southern California, with the detailed work recently completed in February 2017. Complete with its signature factory-fitted sliding sunroof, this classic Microbus is fit for any locale, whether it is a concours or enjoyable afternoon at the beach. Finished in striking factory colors comprising two-tone Velvet Green and white paint with Platinum mesh interior. Equipped with a factory 12-volt electrical system, this groovy VW is prepared for almost any adventure with its correct spare tire, seat belts, pop-out Safari windshields and its upgraded 1,776 cc dual-port motor; yes, you can drive it on the freeway. Clearly, no detail was overlooked in the quest for both ease of operation and pleasure of ownership. This is one of the finest examples currently available and it will surely make a perfect addition to any enthusiast's collection. While there are many examples of VW’s iconic Microbus available and in many variations today, very few carry the appeal of this 21-Window Deluxe. Enjoying consistent popularity, these premium vehicles remain as highly appreciated today – perhaps even more so than when they were new. Don’t miss out on the chance to own this beautifully restored VW bus, and as the Grateful Dead once sang, “…

just keep on truckin’ on.”