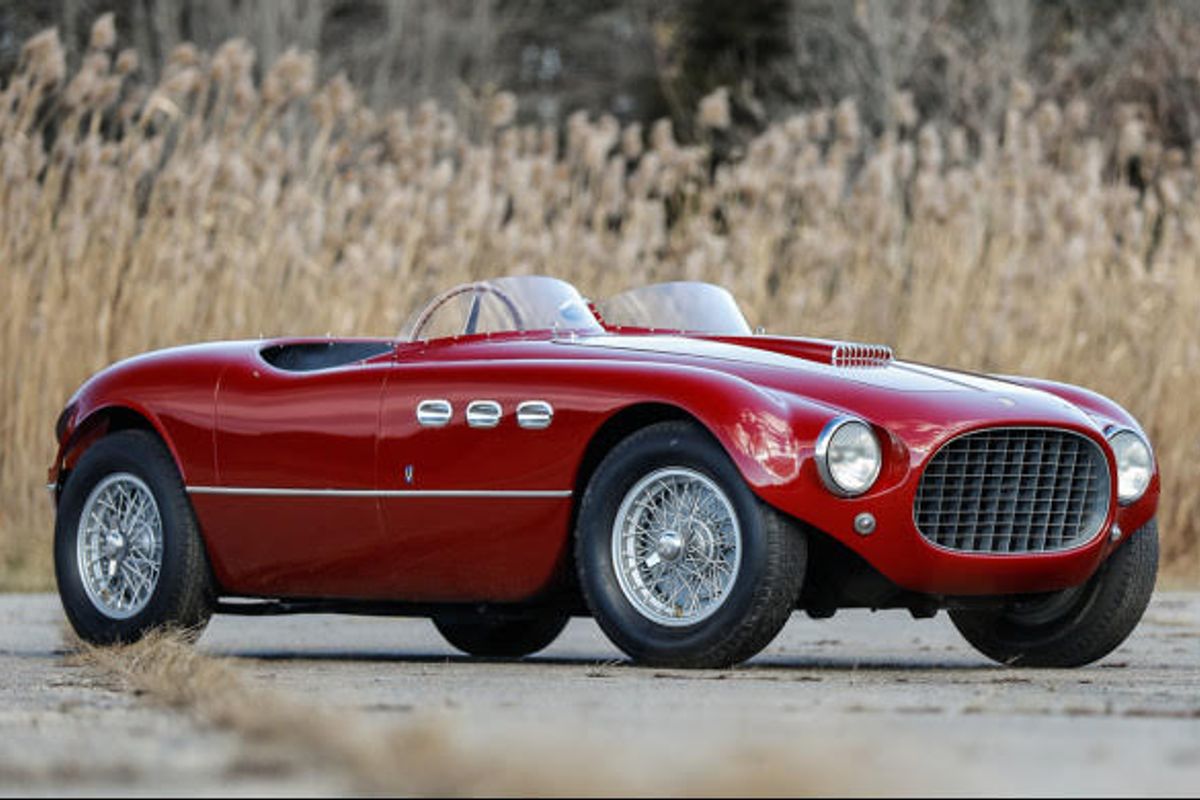 THIS CAR
In 1953, Ferrari unveiled an exciting new model called the 250 Mille Miglia. A development of the experimental 250 Sport that Giovanni Bracco and Alfonso Rolfo drove to victory in the 1952 Mille Miglia, the latest Ferrari sports racing car was the first series-built competition model to use the now iconic “250” appellation.

Although Ferrari was experimenting with Lampredi engines during this period, the 250 MM was powered by a three-liter V-12 designed by Gioacchino Colombo. Essentially a Colombo block with Lampredi-style heads, the 250 MM engine featured individual porting, hairpin valve springs, and exotic four-choke Weber carburetors. It produced approximately 240 bhp at 7,200 rpm, with the benefit of being smaller, lighter, and easier to maintain than a Lampredi engine.

The 250 MM made its competition debut at the 1953 Giro di Sicilia and quickly earned a reputation as a winner. That April, Phil Hill won the Pebble Beach Road Races in his first outing with a 250 MM Spider. In June, Luigi Villoresi drove a 250 MM Berlinetta to victory at Monza, and the following month, Paolo Marzotto won the Coppa D’Oro delle Dolomiti with a 250 MM Spider. Ferrari built just 31 examples of the 250 MM. Pinin Farina bodied the majority in berlinetta form and Vignale bodied the remaining 13, all but one as spiders. This 250 MM, 0348 MM, is one of the chassis that Ferrari shipped to Carrozzeria Vignale in Torino. During the early 1950s, Vignale designed and built custom coachwork for approximately 155 Ferraris, from the most exclusive road-going models to thoroughbred competition cars. That they succeeded in producing winners on the racetrack and at leading European concours d’elegance is a testament to the vibrant collaboration that existed between company founder Alfredo Vignale and designer Giovanni Michelotti.

In 1953, toward the end of his tenure as a coachbuilder for Ferrari, Vignale debuted a new style for two-seater racing cars that possessed the unmistakable imprimatur of Michelotti. These new Vignale Spiders featured compact proportions, rounded forms, imposing grilles, oval portholes, and triangular cutaways in the rear fenders. Bodies in this general style were built for the two-liter 166 MM/53, the three-liter 250 MM, and the 4.1-liter 340 MM.

Of the 12 Vignale Spiders built for the 250 MM chassis, 10 were fashioned in this updated “Series II” style. Each Vignale Spider was essentially unique and 0348 MM, the penultimate example built, features a decorative chrome grille on the hood and outboard headlights, a feature more commonly seen on the larger 340 MM Spiders.

Originally finished in red with brown leather upholstery, 0348 MM was sold new to the Alfred Momo Corporation in Woodside, New York. Momo, who managed Briggs Cunningham’s racing team, then sold, loaned, or leased the 250 MM to Bill Lloyd, a nephew of Cunningham who raced with the team during the 1950s. The 250 MM saw no racing use while in Mr. Lloyd’s hands, and in January 1954, Briggs Cunningham advertised it for sale in the SCCA Bulletin, asking $10,500.