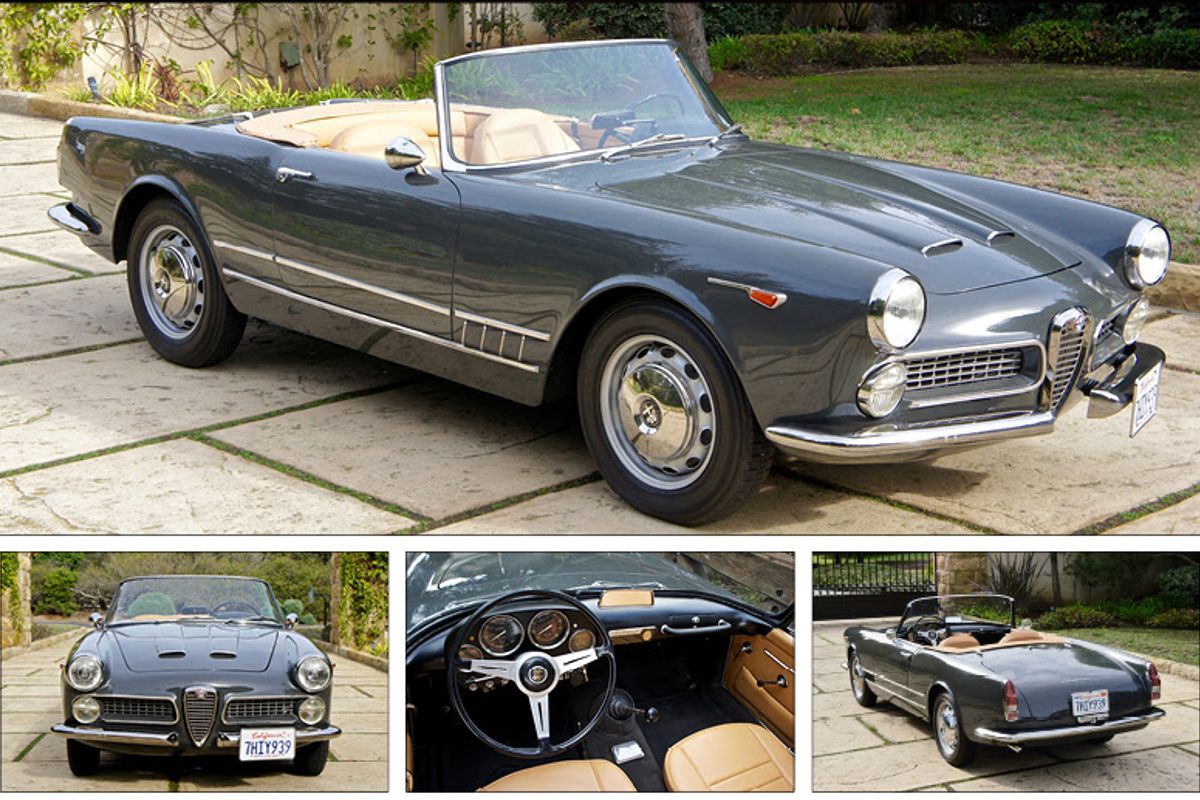 The Alfa Romeo 2000, known to as the “cast iron block two-litre,” was introduced at the November 1957 Turin Motor Show as the successor to the highly successful 1900. The 2000 entered production for the 1958 model year, offered as either a “Berlina” sedan or Touring-bodied Spider, as offered here, followed by a Coupe variant in 1960. Sharing the well-developed 1,975-cc engine and closely derived from its predecessor in mechanical terms, the 2000 was fitted from the outset with a new five-speed gearbox, one of the first cars so equipped during the 1950s. Accented with fine details and minimal yet effective brightwork, the 2000 featured up-to-the-minute styling, comfortable passenger accommodations, and a large trunk compartment providing useful luggage space.

The glamorous 2000 Spider, bodied by Carrozzeria Touring, soon debuted for 1958 and continued in production to 1962. As Alfa Romeo's flagship open touring car, the 2000 Spider offered a more luxurious and sophisticated overall package than the smaller 1,300-cc Giulietta Spider, the 2000 Spider was a true open GT-class car, capable of comfortable cruising beyond 100 mph over long distances. Fewer than 3,500 examples of the 2000 Spider were produced during their relatively brief production run. Predictably, the 2000 Spider was the ideal automotive accessory for many of the era’s business, entertainment, political, and social luminaries, including Audrey Hepburn and first husband Mel Ferrer, who drove one during the early 1960s.

According to the corresponding Certificate of Origin supplied by Alfa Romeo Classiche, this 1962 Alfa Romeo 2000 Spider was produced on April 11, 1962 and shipped to Newark, New Jersey. As offered, it retains the factory-specified paint color. According to recent research, while Alfa Romeo apparently did not maintain accurate records pertaining to 'matching numbers' chassis and engine data, the chassis and engine numbers of this vehicle both do belong to the limited range of production numbers as listed on page 840 of Alfa Romeo historian Luigi Fusi's book, "Tutte le Vetture dal 1910" (All Cars from 1910) regarding production numbers. Although early ownership remains unknown at the time of cataloguing, in 1979 its Californian owner is documented as having driven the car from California to his other residence in Anchorage, Alaska, where he registered it, then drove it back to his home in Orcutt, California later that year, where it was then placed into storage until 1986. That same year, a resident of Nipomo, California purchased the car and began a long-term restoration, which was completed by the next owner, who owned it from 2012 to 2018. Most recently, the Solex carburetors have been rebuilt and tuned by an Alfa Romeo specialist.

This 1962 Alfa Romeo 2000 Spider clearly benefits from its freshly completed, high-quality restoration. Its features are simply resplendent in its unique color combination of Anthracite Gray over a tan interior with useful, driver-centric instrumentation, floor shifter, and triple-spoke steering wheel. Additional desirable highlights include a rare and full set of tools, original bumper guards, an owner's manual, and a brand new black soft top, plus the aforementioned Certificate of Origin from Alfa Romeo Classiche. A rare and striking GT car with excellent driving dynamics and enduring style, this 1962 Alfa Romeo 2000 Spider marks an uncommon and highly refreshing find in today’s collector-vehicle marketplace. Recently coming into its own among wise collectors, it is ready for the next caring owner to hit the open road and enjoy.