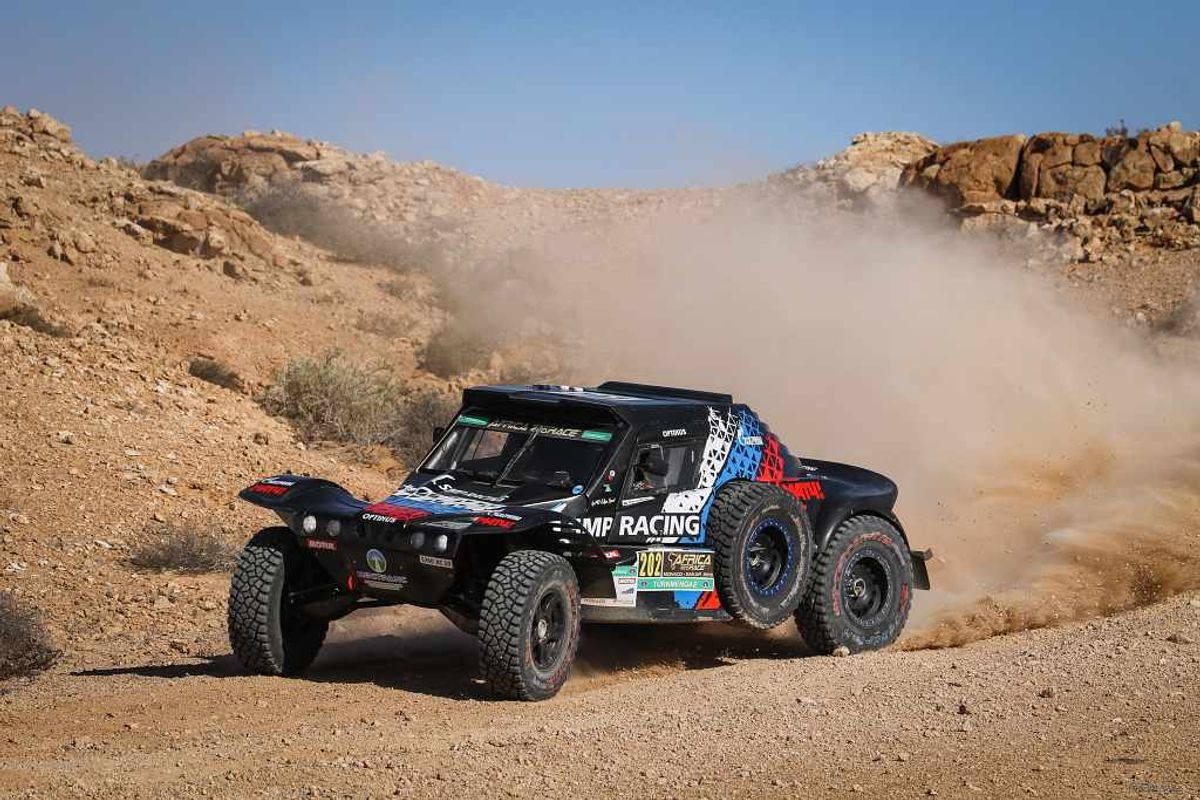 The ultimate Moroccan stage of the AFRICA ECO RACE 2019, made up of a special stage of 420 km and of a 214 km liaison towards Dakhla was quite intense, especially on four wheels where the battle between Buggies raged. Some are relieved to get out of Morocco. Others are worried about what is waiting in the Mauritanian desert. But all will take advantage of the rest day on the edge of the Atlantic Ocean to Dakhla.

BOTTURI leaves Morocco as leader
Alessandro BOTTURI on his Yamaha caught and passed Pal Anders ULLEVALSETER who opened the track with his KTM. Once the Norwegian was caught up by the Italian, both men drove together for 400 kilometers until the finish line. In the end, BOTTURI was ahead of ULLEVALSETER by 1’23’’ and in the overall ranking, 7’26’’. Behind both men and in front of the KTM of Felix JENSEN,  Martin BENKO takes 3rd on the stage and 3rd place overall in front of Simone AGAZZI. The Italian preferred playing it safe behind the wheel of his HONDA - this special stage was fast and needed serious navigation skills several competitors drove in small groups in order avoid the risk of getting lost or arriving late in Dakhla. The surprise of the day was Italian Domenico CIPOLLONE who took 6th place on the special stage as well as on the overall ranking in front of Frenchman Philippe CAVELIUS. Great performance also from Spaniard Juan Jose CAMPDERA LOZANO, 7th on the scratch and first in the malle moto ranking, drivers who compete without assistance, lead by Frenchman Stéphane HAMARD with an 8th overall.

KUPRIANOV leads the battle of the Buggies
When Dominique LAURE and Christophe CRESPO arrived at the finish at 2PM, they were discovered they had not won the stage  - which would have been their 5th in a row. Sergey and Aleksandr KUPRIANOV had just won the special stage, 33’’ in front of the TAREK of Patrick MARTIN and Didier BIGOT. A very small difference considering the 420 km of special stages disputed at over 110 km/h. Another OPTIMUS completes the podium of the day.  The overall ranking is still dominated by Dominique LAURE and Christophe CRESPO, 22’30’’ ahead of Jean-Pierre STRUGO and François BORSOTTO. In a different category, before the entrance in Mauritania, in the SSVs, Rudy ROQUESALANE, Vincent FERRY on CAN AM are running the show, same as Gérald MOGNIER and Pierre ROUBIN in the OPEN category with their Buggy PEUGEOT, François and Stéphane COUSIN in 4x4 and Kenjiro SHINOZUKA & Cathy DEROUSSEAUX in T2.

Elisabete JACINTO dominates the truck category
The large smile of Elisabete JACINTO when she got out of the truck was of satisfaction as the Portuguese driver, perfectly assisted by Jose MARQUES and Marco COCHINHO, won first place in the truck category by getting the 7th time of the day at only 10’06’’ from auto leader. Taking into account that the MAN team stopped 8 minutes after 3 kms for some mechanical problems in the intercooler, it was an impressive performance. A result that enables them to take the lead again of the truck overall ranking helped by the clutch problems of Tomas TOMECEK's TATRA which needed a tow.
This Sunday 6th of January 2019, the competitors of the AFRICA ECO RACE will benefit from a day of rest in Dakhla, a sand bank in the Southern extremity of Morocco where temperatures are around 25 degrees. A well deserved rest to reboot along the Atlantic Ocean before the second week in the Mauritanian desert.