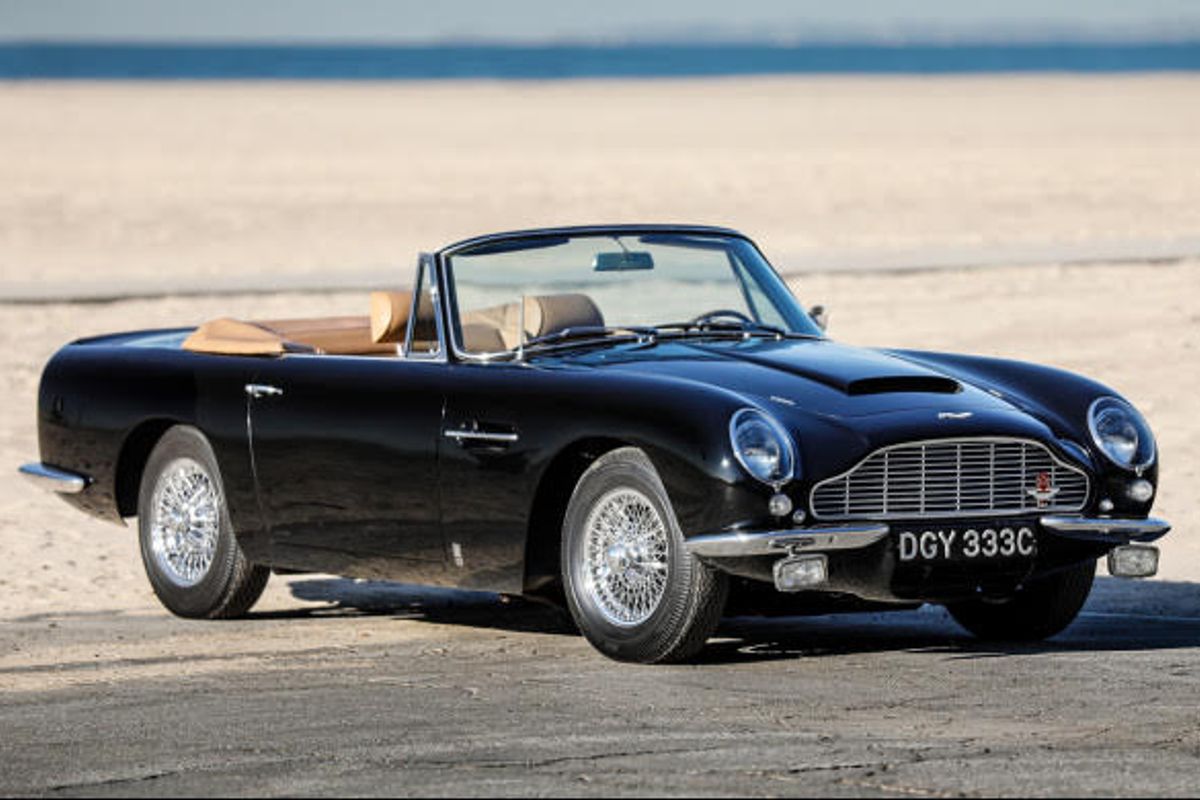 THIS CAR
In October 1965, Aston Martin introduced the DB6, the much-anticipated replacement for the popular DB5. In keeping with company tradition, Aston Martin produced an exclusive series of drophead coupes based on the new model line. To distinguish these new open models from the DB4 and DB5 offered previously, Kent Monk of Aston Martin Lagonda Ltd. christened the new car “Volante,” marking the first appearance of this now-timeless nameplate.

Following a limited run of 37 Short-Chassis Volantes, built on remaining DB5 chassis, Aston Martin unveiled the all-new DB6 Volante at the 1966 London Motor Show. Built on the longer wheelbase of the DB6, the latest Volante was constructed using the same complex Superleggera (Super light) method of its predecessors, yet a variety of subtle aesthetic and mechanical advances resulted in a more refined and sophisticated driving experience.

The DB5’s classic all-alloy, three-carb engine was carried over for the new Volante models, as was the well-proven rack and pinion steering and dualcircuit Girling disc brakes. Two transmissions were offered – a Borg-Warner automatic and the more sporting ZF gearbox that had been introduced midway through DB5 production. A generous list of additional options included a more powerful Vantage-specification engine, limited-slip differential, power steering, and air-conditioning.

Though it was luxuriously appointed and equipped with every modern convenience, the Volante remained a thoroughbred Aston Martin grand touring car, with outstanding road manners, impressive acceleration, and a top speed approaching 150 mph.

As with all David Brown-era drophead coupes, the DB6 variant was an exclusive automobile. Produced continuously from October 1966 through November 1970, the DB6 Volante was offered in both Mk I and Mk II specifications. In all, just 140 were produced, of which a mere 30 were specified in left-hand drive. Due to its extremely limited production and prestigious status as Aston Martin’s top-of-the-line offering, the DB6 Volante has always been prized by discerning collectors.

This magnificent Volante was ordered by Keenan Motors Inc. in Philadelphia and delivered, on August 30, 1967, to its first owner, John T. Dorrance Jr. Mr. Dorrance’s father, Dr. John T. Dorrance, invented canned condensed soup and was the president of Campbell Soup Company. After graduating from Princeton University and serving as a captain in the US Army, the younger Dorrance joined Campbell in 1946, eventually becoming the company’s president and board chairman.

Mr. Dorrance retained the DB6 Volante for approximately a decade, and it then passed to Mel Ritter of Scottsdale, Arizona. Mr. Ritter was a passionate enthusiast of the famed English marque, and early in his ownership the car was registered on Arizona vanity plates reading “Aston.” The Volante remained in Mr. Ritter’s ownership until 2003, when it was sold to a Connecticut-based collector, joining a stable that included several other significant Aston Martins. Soon after acquiring the Volante, the new owner commissioned the marque experts at Autosport Designs in New York to service the car’s mechanical systems and install a correct ZF manual five-speed gearbox, a common and widely accepted upgrade for the DB6.

Since this work was carried out, the car has enjoyed minimal use and today shows less than 37,500 miles on the odometer, a figure the consignor believes represents the original mileage. Currently finished in the striking color scheme of black over tan leather upholstery, the DB6 Volante is beautifully presented throughout and accompanied by an owner’s handbook and copy of the factory build sheet.

Among the most rare and exclusive Aston Martins, DB6 Volantes remain highly sought-after and are found in the finest collections. Eligible for countless rallies and leading international concours events, this handsome Aston Martin is sure to stand out wherever it appears, particularly at AMOC gatherings.

Given its desirable specification, noteworthy provenance, and lovely condition, this DB6 Volante is surely among the most desirable examples of a David Brown Aston Martin. Its current availability marks the first time that this remarkable car has been offered for public auction. We encourage discerning collectors to pay close attention to what may well be the opportunity of a lifetime.

Also crossing the block at this auction: