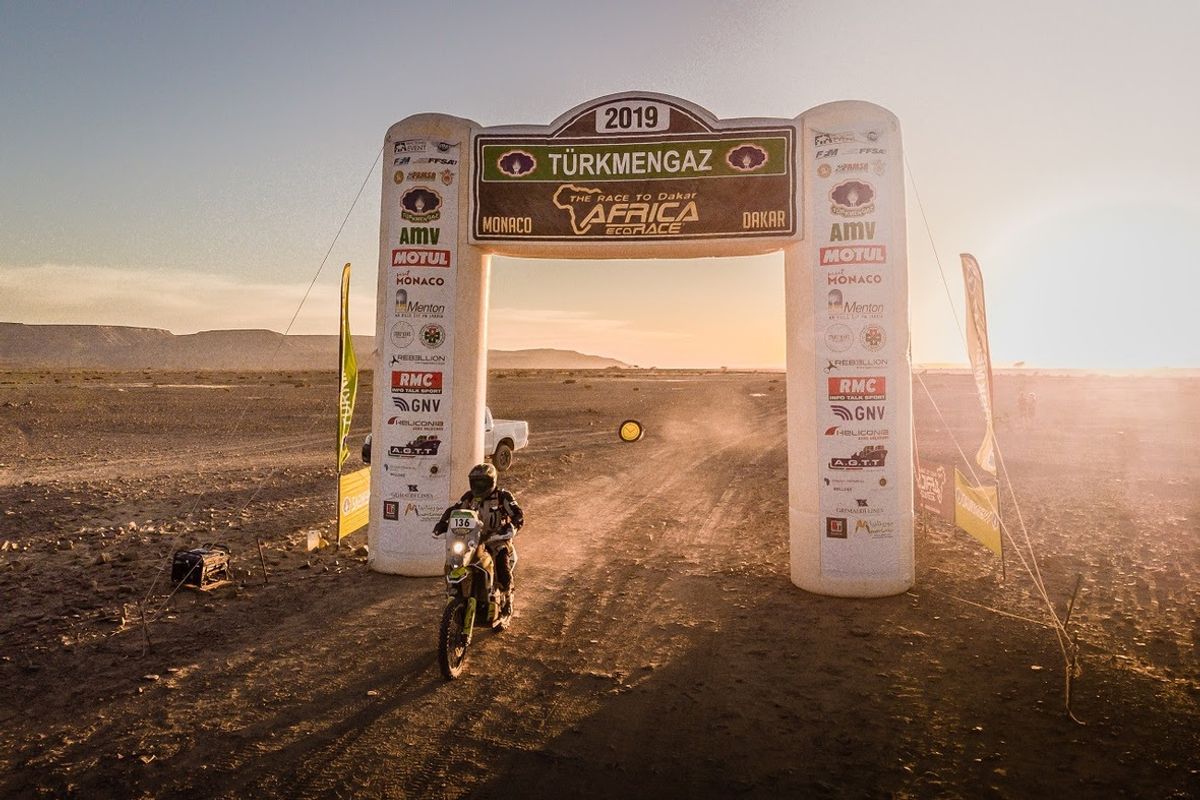 Thursday saw competitors racing in a loop of 375 km around Chinguetti, UNESCO world heritage site, located approximately 60 km from the Amodjar bivouac A difficult navigational day but the sand a difficult an obstacle as anticipated and the 100 kilometers of dunes were raced without much difficulty.

Felix JENSEN 27 years old Norwegian team partner of Pal Anders ULLEVALSETER who first made his debut in rally-raid in 2018 on the AFRICA ECO RACE awhere he finished 4th. Today, a hidden waypoint was a challenge and WPM only appeared on the GPS when in 500 metre range. Felix JENSEN was the first to validate this WPM and, onboard his KTM, took the first special stage of his young career. He beat Patrice CARILLON and his KTM by 1’05’’. Simone AGAZZI with his HONDA, one of the favorites of the race, finished 3rd at 2’08’’ in front of Pal Anders ULLEVALSETER at 3’44’’.

Domenico CIPOLLONE who arrived in 6th, only 10’56’’ from the winner cut into the time between him and ULLEVALSETER.  In the general ranking, BOTTURI still leads by 5’15’’.  Not much but with only two special stages left, ULLEVALSETER has to react fast. Great day for the legend Franco PICCO who finished 8th, just behind Francisco ARREDONDO.  Bad news though for Guillaume VIDAL who fell on kilometer 40 and required a helicopter transfer to Nouakchott for some medical tests. His KTM caught fire in the accident and was destroyed.

GERARD AND DELACOUR ONCE MORE AT THE TOP OF THE LIST
David GERARD and Pascal DELACOUR clocked the best time of the auto category with their OPTIMUS, ahead of the “Fous du Volant” team Philippe GOSSELIN and David BONON who dedicated this success to their friends Dominique LAURE and Christophe CRESPO, out of the race for now two days.
Patrick MARTIN and Didier BIGOT are third on the stage in their TAREK, taking them to 2nd position in the general ranking following the complicated race of Yves FROMONT and Paul VIDAL’s TAREK. Jean-Pierre STRUGO and François BORSOTTO, the leaders of the general auto/truck ranking, settled for 5th place today. An honorable result enabling them to keep the leadership with an hour and twenty minutes ahead of MARTIN/BIGOT

Amongst the noticeable performances of the day, Jean-Luc PISSON-CECALDI and Thomas GAIDELLA in their SSV CAN-AM X3 scored a 6th place ahead of François & Stéphane COUSIN with his NISSAN, 7th and first 4x4, and Yves FROMONT and PAUL VIDAL in 8th with 55’20’’. Finishing ninth, André & HIRIGOYEN and François CAZALET - placed for the first time in the top 10 with their 2 wheel drive prototype. Alexey TITOV and Andrey RUSOV had a good race with their big FORD Raptor and finish 10th on the stage.

BOUWENS PUTS ON A SHOW IN THE TRUCK CATEGORY
After breaking down in their IVECO Wednesday, Igor BOUWENS, Tom DE LEUW and Ulrich BOERBOOM were playing catch up today and clocked the second fastest time in the auto/truck category, 2’31’’ from David GERARD. Most importantly, they are ahead of the TATRA of Tomas TOMECEK by 32’34’’ and Elisabete JACINTO, Jose MARQUES and Marco COCHINHO’s MAN by 35’46’’. The Portuguese keep their advantage in the general ranking with over two hours on Noël ESSERS, Marc LAUWERS, Johan COONINX in their MAN and Johan ELFRINK & Dirk SCHUTTEL in their MERCEDES.

Today, the caravan of the AFRICA ECO RACE will leave the Adrar region to join Akjoujt, usual stop for the AFRICA ECO RACE. In 2018, it was this last special stage of Mauritania was the hardest of the 10th edition. Even though the selective area of 472 kilometers has changed and two thirds of the track is renewed, the day will still be very challenging.