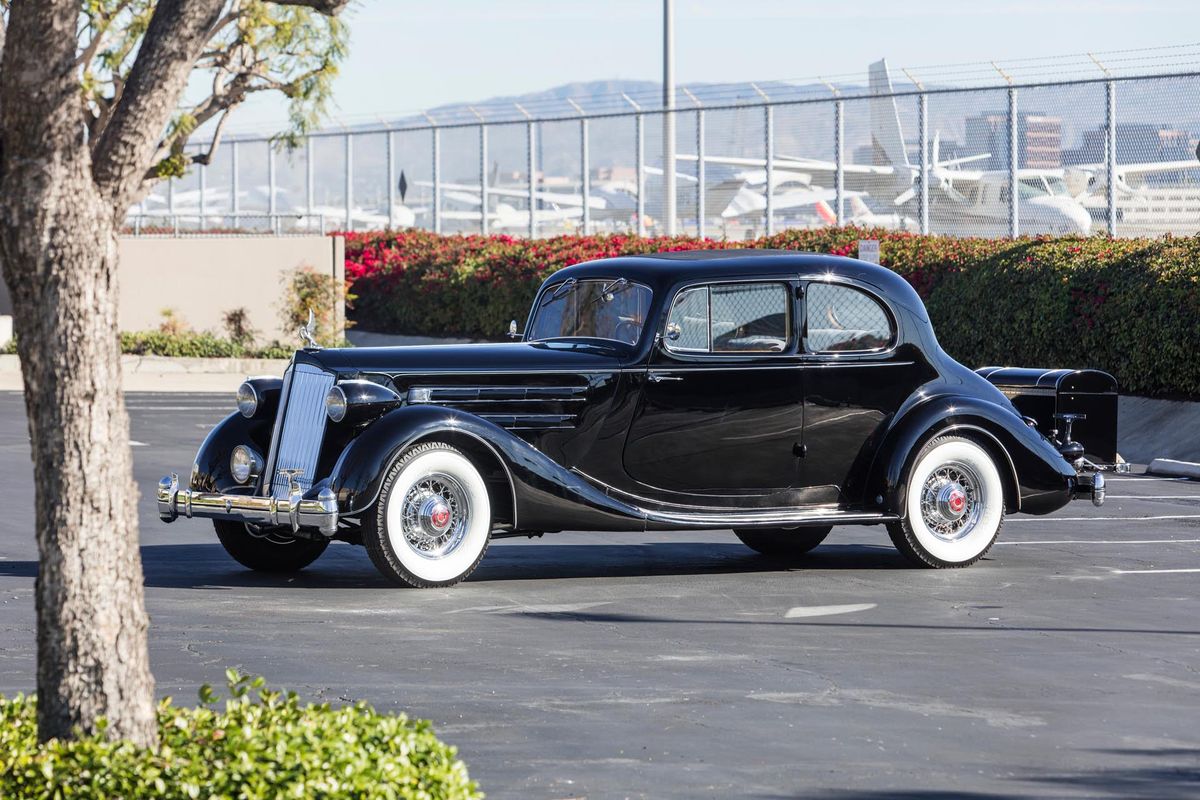 As the United States was finally beginning to stage a recovery from the Great Depression, a process accelerated by President Franklin Delano Roosevelt’s New Deal policies, Packard attempted to cope by manufacturing even more luxurious cars than it had prior to 1929. However, Packard, being an independent automaker, did not have the luxury of absorbing its financial losses as Lincoln did with Ford and Cadillac with GM. Costs were kept lower by maintaining a single production line and introducing new models through Packard’s “Series” sales formula. The advantage of this system allowed Packard to debut their automobiles not on a yearly basis, but rather in coordination with the end of a single Series, which could last anywhere from months to years. It is this approach which allowed Packard to outlast other independent brands such as Franklin, Marmon, Ruxton, Stearns-Knight, Stutz, Duesenberg, and Pierce-Arrow. In 1932, the new V-12 Packard Twin Six was introduced. Designed by Chief Engineer Jesse Vincent, the price for one of these cars started at a heady $3,650. Renamed the “Packard Twelve,” this car became one of the most significant of all Packard models ever produced.

The Packard Twelve, with a Series production total of over 35,000 vehicles, was a very successful venture for Packard and is thought by many to represent the venerable company’s zenith. Offered exclusively from a noted California collection, this 1936 Packard 1407 Twelve Coupe represents one of the most attractive examples of Packard’s renowned Twelves, and it is 1 of just 10 Model 1407 Coupes produced. It was the ninth built and one of only four that are still known to exist today. The original owners, Mr. and Mrs. Robert Stockton, purchased the car new in Illinois for the personal use of Mrs. Stockton. They purchased the car from their local Packard dealership on November 30, 1935, with a list price of $3,990. As if they had future knowledge of the significance of their Packard, the Stocktons kept detailed records pertaining to the car’s maintenance and upkeep. They owned the car until 1952 and accumulated 55,000 miles during their long tenure. From this point forward, this car passed through the careful ownership of several Packard enthusiasts, including the President of the CCCA (Classic Car Club of America). Each owner kept up with the Stocktons’ tradition of maintaining documented history of the car’s care and maintenance.

As offered, this Twelve remains finished in its original black, nicely accentuated by tasteful brightwork. Inside, the carpeting contrasts elegantly with light blue upholstery and wooden trim to create the stylish interior so often associated with the grand Packards of the era. The car is further complemented by wire-spoke wheels and a set of four brand-new wide whitewall tires. The current owner also added the optional luggage trunk, further highlighting the stylish flair of this classic Packard. Driven and enjoyed on a weekly basis, this car is no stranger to the open road and is a regular sight on the streets and highways surrounding its present home in California. Earlier this year this car participated in the Packard International Show Tour, and it was also exhibited at the Al Enderle Memorial Car Show, where it received Best in Show. Recent maintenance amounting to nearly $15,000 and an extra set of Michelin blackwall tires serve as nice additions to this already substantial offering. Fabulous to drive as expected, this 1936 Packard 1407 Twelve Coupe serves as a testament to the build quality and inherent prestige of the Packard Twelve. As offered, it stands ready to be enjoyed for many years to come and with its bold, yet graceful appearance, this wonderful CCCA Full Classic® offers entry into a veritable multitude of top-level events, shows, and classic touring events.