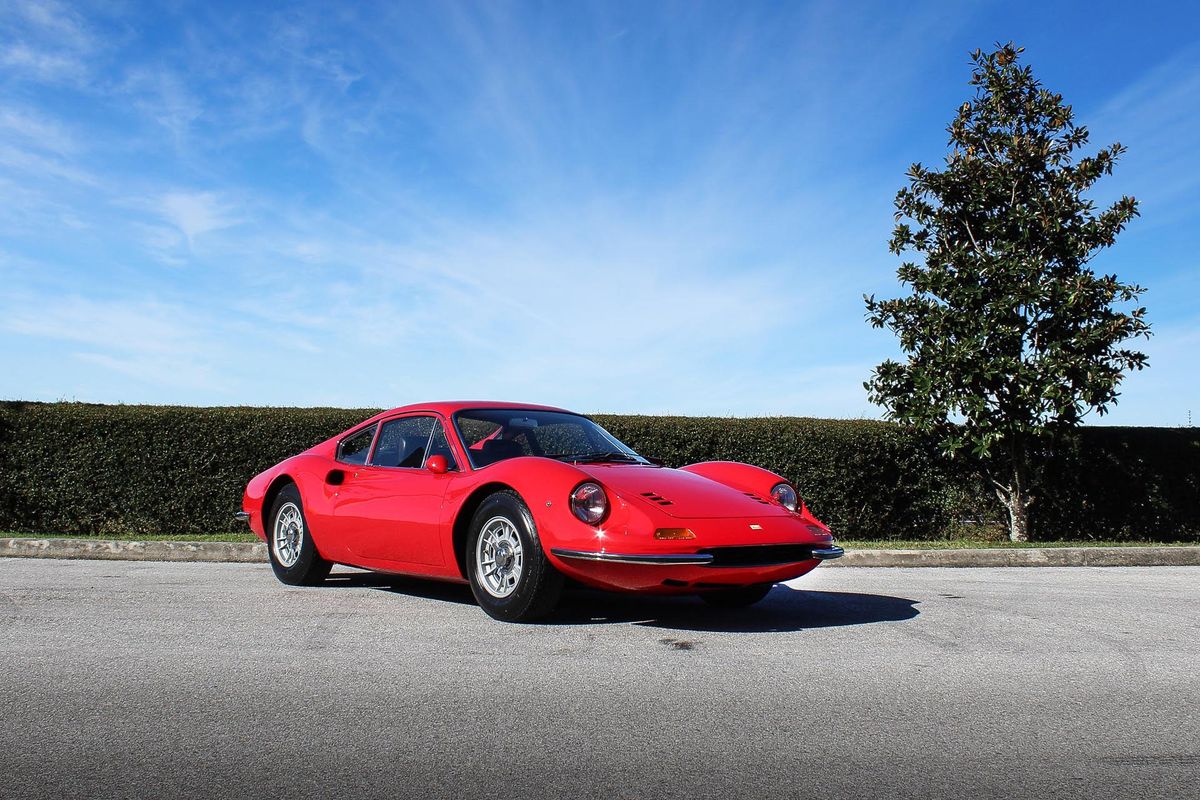 They Say:
The 206 represented a monumental transformation in the way a Ferrari sports car would be designed and configured. The roadgoing Dino was designed to become its own brand, offering no outside badging clues of the parent Ferrari brand. Named after Mr. Ferrari's only legitimate child Alfredino, affectionately shortened to 'Dino', the Dino brand was initially attributed to an engine design, master-minded by Ing. Vittorio Jano, whose legendary resume began in pre-war Alfa Romeo 6C, 8C and later Lancia.

The pure racing Dino V-6 engine was introduced in 1957. Dino Ferrari, a very qualified engineer, aided in the design, but unfortunately never saw the project come to fruition, suffering muscular dystrophy and passing in 1956. But his legacy lived on with the ‘Dino’ script adorning the cam covers. The success of the engine was immediate with Mike Hawthorn taking victory in the 1958 Formula 1 World Championship, Phil Hill capturing the 1961 Manufacturer’s and Driver’s championships in 1961, and innumerable racing successes through the 1960s, until the magnificent Dino 206 SP two-litre rear-engined sports-prototype of 1965.

The engine was then developed for road use. A Pininfarina show car 'special' was introduced to the Paris Salon of 1965. The Dino 206 GT Speciale featured the V-6 engine installed longitudinally behind the cockpit. At the 1966 Turin Salon, a further developed Dino Berlinetta GT was then displayed by Pininfarina, also with longitudinal engine, but a third prototype quickly followed with its engine turned 90-degrees to mount transversely in the rear bay, in unit with a Ferrari five-speed transaxle. This hugely successful iteration centered the mass within the wheelbase for greatly increased handling as well as improving cabin space.

After showing pre-production prototypes at the 1967 Turin Salon and Brussels in 1968, the 1969 Dino 206 GT was eventually offered to the public for the 1969 model year. The Dino 206 GT engine was a 65-degree V-6 unit with twin overhead camshafts per cylinder bank and offered 180 HP at a nerve-tingling 8,000 RPM. The engine was shrouded in arguably the most beautiful hand-crafted aluminum coachwork to adorn a sportscar. Styled by Leonardo Fioravanti at Pininfarina and sculpted by and at Scaglietti, only 153 examples were built.

The 206 GT offered here is an exquisite example of this most rare, desirable and important production Dino variant. Delivered new to Mr. Felix Varona, the sole official Ferrari Certified Mechanic in Venezuela at the time, by Enzo Ferrari himself. Mr. Varona expressed his enthusiasm for the larger displacement 246 GT but was enthusiastically encouraged by Mr. Ferrari to take the truly hand-crafted, lighter and more limited, 206 instead. This story is verified by the current owner who, as a young man, was Mr. Varona’s employee. He would eventually purchase the car from him in 1984. At that time, the car needed minor refurbishment of various rubber trim pieces as well as a service, new clutch and suspension work. Now showing only 29,000 km from new, the car presents beautifully. The low mileage is further indicated by the exceptional condition of the original interior.

Eventually sympathetically restored by the highly qualified owner, #00184 was subject to a refinish in the original Rosso Corsa paint color, complemented by the original black interior. The knock-off Cromadora wheels distinguish the car from the 246 successor, as do the 206-only exhaust tips. Today, the car presents exceptionally well. The paint retains great depth of shine and panel fit is excellent. The engine bay and original engine are both very clean and tidy, while the original interior carries the gentle patina of a meticulously maintained and carefully enjoyed car by its Ferrari mechanic owner. The only departure from originality is the steering wheel, though the original accompanies the car.

Only two fortunate custodians have enjoyed this car in nearly half a century. The Dino is consistently ranked among the most beautiful and engaging automobiles ever conceived, and this fine and rare example awaits only its third discerning owner.