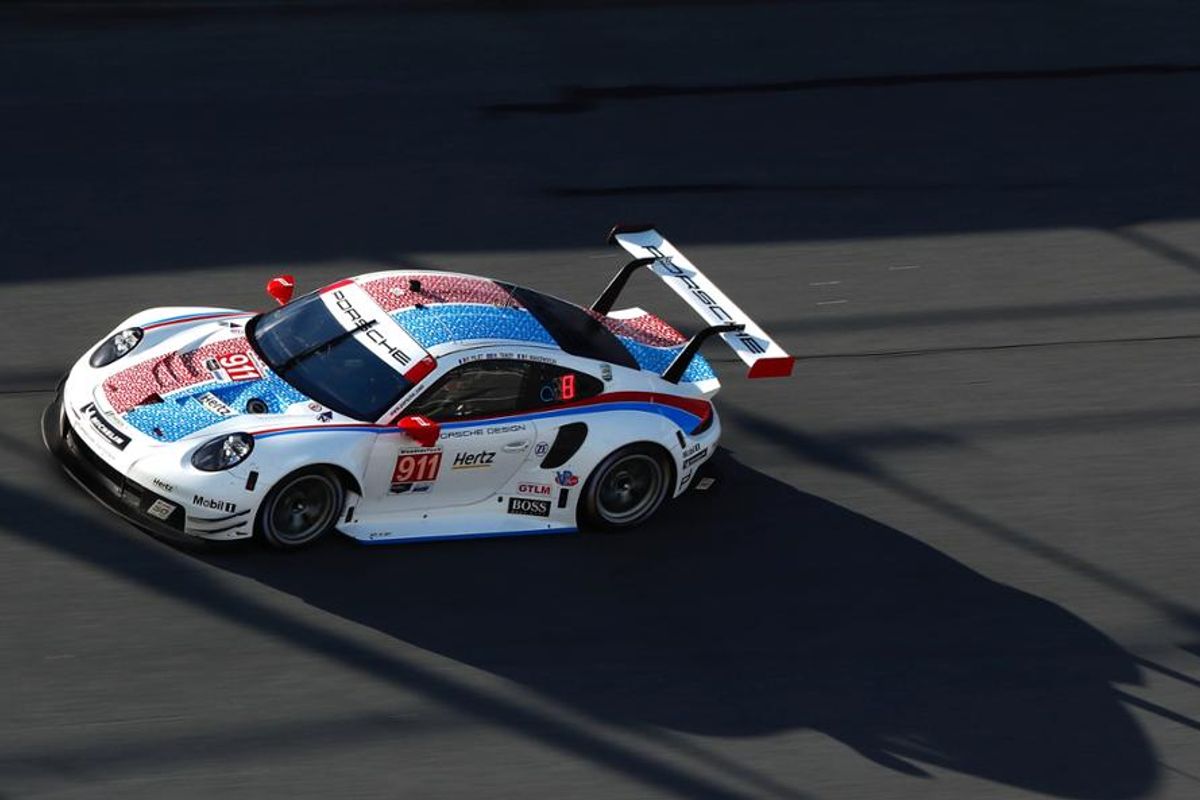 No other manufacturer has had more success at Daytona International Speedway – and the Rolex 24 At Daytona in particular – than Porsche.

And when the green flag flies Saturday at 2:35 p.m. ET (live NBCSN coverage begins at 2 p.m. ET), it’ll be a Porsche leading the IMSA WeatherTech SportsCar Championship GT field to the green flag. Thanks to a record-setting run by Nick Tandy on Thursday, the manufacturer will go for a 70th Rolex 24 class win from the pole.

“We knew the Vettes were going to be together, so it creates a double kind of draft,” Tandy said. “Then I got the perfect tow, the perfect slipstream down the front straight, obviously with the pair of them in front. I was watching the lap time in the car and thought this was going to be a good one. It was probably worth a half second or so.”

Tandy’s teammates in the No. 911 Porsche this weekend are Patrick Pilet and Frederic Makowiecki.
While Porsche has shown its familiar speed early in the Rolex 24 weekend, it’ll be anybody’s race come Sunday afternoon in the always-competitive GTLM class. In fact, the top four spots in qualifying were made up of four different manufacturers.

After winning back-to-back Rolex 24 watches in 2015 and 2016, the Corvettes are looking to return to the top step on the podium. The bright yellow No. 3 Corvette Racing Corvette C7.R piloted by Jan Magnussen will start second in the season-opener after turning a lap of 1:42.583 (124.927 mph), and he will be joined by Antonio Garcia and Mike Rockenfeller.

The Ford GT, racing for the third straight GTLM win at Daytona for the make, took the third spot in the starting lineup. Defending race winner Ryan Briscoe recorded a time of 1:42.634 (124.865 mph) in the No. 67 Ford Chip Ganassi Racing entry.

In record-setting speed, Marcos Gomes piloted the Via Italia Ferrari 488 GT3 to the GTD class MOTUL Pole Award for this weekend’s Rolex 24 At Daytona.

This marked the third straight year Ferrari has won the pole for the prestigious season-opener and marked the second straight year that the GTD pole speed record was broken. Gomes’ time of 1:45.257 (121.753 mph) eclipsed the 1:46.049 (120.844 mph) set last year by Daniel Serra with the Spirit of Race Ferrari 488 GT3.

In fact, the top nine cars on the speed charts topped the 2018 record.

“It’s my third time driving at Daytona, I'm getting better all of the times I've got in the track,” Gomes said. “The GTD class is the most difficult because we have the most cars, and it’s the most competitive, too, and to fight for the win on Saturday and Sunday will be very difficult for all the drivers and all the teams in the class.”

Gomes will be joined in the No. 13 machine by Chico Longo, Victor Franzoni and Andrea Bertolini.

Ben Keating, who is chasing a third straight IMSA Michelin Endurance Cup title alongside teammate Jeroen Bleekemolen, posted the second-fastest time of 1:45.324 (121.676 mph). Luca Stolz and Felipe Fraga will round out the lineup in the No. 33 Mercedes-AMG Team Riley Motorsports Mercedes-AMG GT3.

The No. 86 Meyer Shank Racing w/ Curb-Agajanian Acura NSX GT3 rounded out the top three. Trent Hindman turned a lap of 1:45.396 (121.592 mph) and will share the ride with Mario Farnbacher, Justin Marks and AJ Allmendinger.

NBC Sports will show the Rolex 24 At Daytona in its entirety between NBCSN and the NBC Sports App. Live coverage begins on NBCSN at 2 p.m. ET on Saturday, Jan. 26.