Farewell performance for the successful Porsche 911 GT3 R in Bathurst 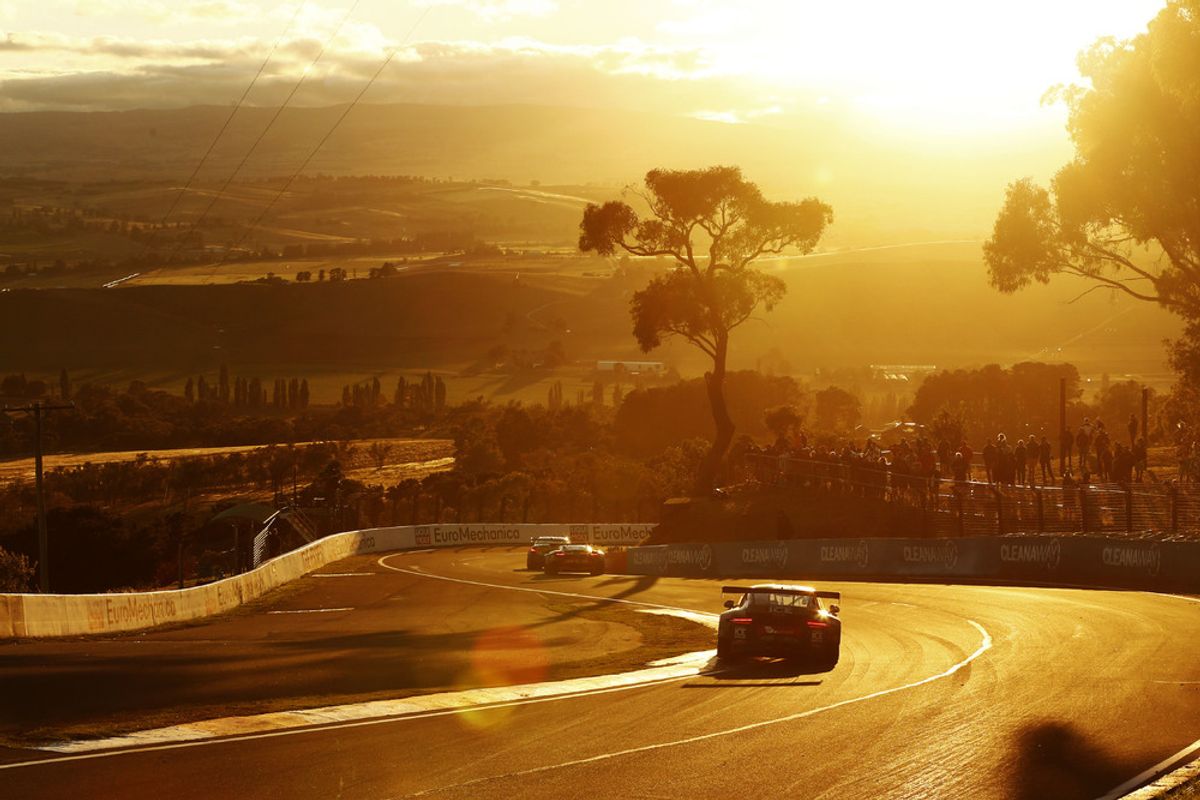 The 12-hour race on the legendary Mount Panorama Circuit in Bathurst kicks off the 2019 season of the Intercontinental GT Challenge. Four Porsche 911 GT3 R will contest the spectacular event in Australia on the first weekend in February. Three customer teams field the successful GT3 vehicle, which will give its final farewell performance Down Under. As stipulated by the regulations, the GT3 cars must be last year’s spec. Facing stiff competition from vehicles from nine other manufacturers in the top category, the Porsche teams have good chances of success. Different this year: Instead of taking his place in the cockpit, Porsche works driver Earl Bamber (New Zealand) assumes the role of team boss at the pit wall.

The race
The GT race was first contested on the 6.213-kilometre Mount Panorama Circuit in 1991. The circuit 200 kilometres west of Sydney consists of public roads that wind over 23 curves through the hilly countryside of New South Wales. Per lap, the vehicles must overcome an elevation difference of 174 metres. The snaking, narrow passages across the ridge of the mountain represent a stark contrast to the long straights at the foot of Mount Panorama. The racetrack poses a great challenge to drivers, engineers and teams alike. Traditionally, the 12-hour event takes off before sunrise at 5.45am, with the chequered flag dropping in the early evening before sundown.

The Porsche 911 GT3 R
The 911 GT3 R was designed by Porsche for worldwide GT3 series. Mounted with the ultra-modern, four-litre flat-six engine with direct fuel injection, the 368 kW (500 hp) customer sport racer celebrated its race debut in January 2016 at the Daytona 24-hour race. Since then, the racer has notched up victories in numerous international racing series, for example in the IMSA SportsCar Championship, the World Challenge, the ADAC GT Masters, and at the Nürburgring VLN long distance championship. For 2019, the model will be replaced by a new version.

The schedule
The Bathurst 12 Hour takes off on Sunday, 3 February, at 5:45 hrs local time (Saturday, 19:45 hrs CET). The race can be watched live on the Internet outside Australia on www.bathurst12hour.com.au.

Comments before the race
Fritz Enzinger (Head of Motorsport): “Bathurst marks the start of the Intercontinental GT Challenge. This year we aim to go all-out in this worldwide endurance series for GT3 vehicles. We’re contesting the first round with the tried-and-tested Porsche GT3 R. This car has underlined its potential impressively, achieving many successes on different racetracks. With our strong driver crews and the well-structured, regional teams, we should be well positioned to take on the tough fight against many other brands.”

Sebastian Golz (Project Manager 911 GT3 R): “Although Earl Bamber’s team is still relatively new, it has all the ingredients to be successful at such a long-distance race: a top-notch driver line-up and perfectly prepared cars. The other customer teams are also well positioned. I’m confident that all four Porsche 911 GT3 R will be in a position to bring home a podium result. Bathurst is a very special race. If you get through without mishaps and ultimately have the fastest driver at the wheel, then anything is possible. Our major goal is to send our proven 911 GT3 R into retirement with one last victory.”

Romain Dumas (Porsche 911 GT3 R #911): “The event, the track, the environment – this is what impressed me last year. It makes me all the more excited for this year’s race. My teammates Mathieu and Sven don’t yet know this special track, however they’ll quickly familiarise themselves with its quirks. Our car is proven. Bathurst will be the last time we compete with the 911 GT3 R in this specification. Looking at the championship, it’s important to harvest as many points as possible here and not immediately fall behind.”

Sven Müller (Porsche 911 GT3 R #911): “I’ve never been to Bathurst so it’s all new for me. I practiced in the simulator and noticed that it’s an incredibly beautiful racetrack, which needs precision and courage. We know the Porsche 911 GT3 R inside out. Our team is well prepared. We have three works drivers sharing a car at this event, so of course expectations are high. We want to win.”

Mathieu Jaminet (Porsche 911 GT3 R #911): “For years I’ve watched the Bathurst race on television in fascination, and now I get the chance to drive there. At the end of the 2018 season I literally begged Porsche to let me race there. I’m thrilled and super motivated. It’s interesting to have my works driver colleague Earl Bamber, with whom I contest the endurance races in the IMSA series, as my team boss in Bathurst. From teammate to team boss within a week – that’ll be fun.”

Dirk Werner (Porsche 911 GT3 R #912): “Bathurst was the absolute highlight of my 2018 season. The racetrack is fantastic, a unique challenge. Driving there is huge fun and now that I have more experience it’ll be even better this year. We’re driving our proven GT3 car for the last time, it’s a final performance. It’s always a special experience to begin the year with a world tour – from Germany via Daytona to Bathurst and home again.”

Dennis Olsen (Porsche 911 GT3 R #912): “It’ll be the last big outing for the old generation of the Porsche 911 GT3 R. This alone makes our race in Bathurst particularly delightful. Earl Bamber’s team will give their utmost. With Dirk Werner and Matt Campbell, I have two world-class teammates joining me in the cockpit. Both know the racetrack well. I have to learn fast and perhaps turn a few more laps during practice. If I can find my rhythm quickly then we can fight for a front spot.”

Matt Campbell (Porsche 911 GT3 R #912): “I’m so excited about my home race in Bathurst. Together with the 24 Hours of Le Mans, it’s definitely the highlight of the year for me. The extraordinary circuit at Mount Panorama is the best racetrack in the world. I’ve raced at Bathurst many times and I’ve been successful there. I hope that we can compete amongst the frontrunners this year so that we can give last year’s Porsche 911 GT3 R a fitting send-off into retirement.”

Kévin Estre (Porsche 911 GT3 R #12): “This’ll be my fourth time contesting the Bathurst 12 Hour. I’ve always had a great time there, but unfortunately not a lot of luck. We were really close to a podium result last year, so this time it should finally work. I’m thrilled to be driving with “CJ” again. And we’ll be supported by our new Porsche Junior Jaxon Evans. He knows this track well because he’s competed in other categories there. Hence, we’re well prepared to race on one of my absolute favourite circuits.”

Marc Lieb (Porsche 911 GT3 R #540): “We climbed the podium at this wonderful event in 2018. We’re hoping for such a success again this year. I’m driving with Tim Pappas and Jeroen Bleekemolen again so that will work very well. I think the event is one of the most beautiful in the world. The spectators are great, the race is really demanding, and the track is simply fantastic. I’m really looking forward to my fourth race in Bathurst.”

This is the Intercontinental GT Challenge
The 2019 Intercontinental GT Challenge calendar is made up of five endurance race on five continents. While the teams are only permitted to field 2018-spec GT3 cars at the season-opening round in Bathurst (Australia), the latest generation is allowed at the following races in Laguna Seca (USA), Spa-Francorchamps (Belgium), Suzuka (Japan) and at the season finale in Kyalami (South Africa). Porsche will not compete with a factory squad, but instead supports different customer teams in their campaign.