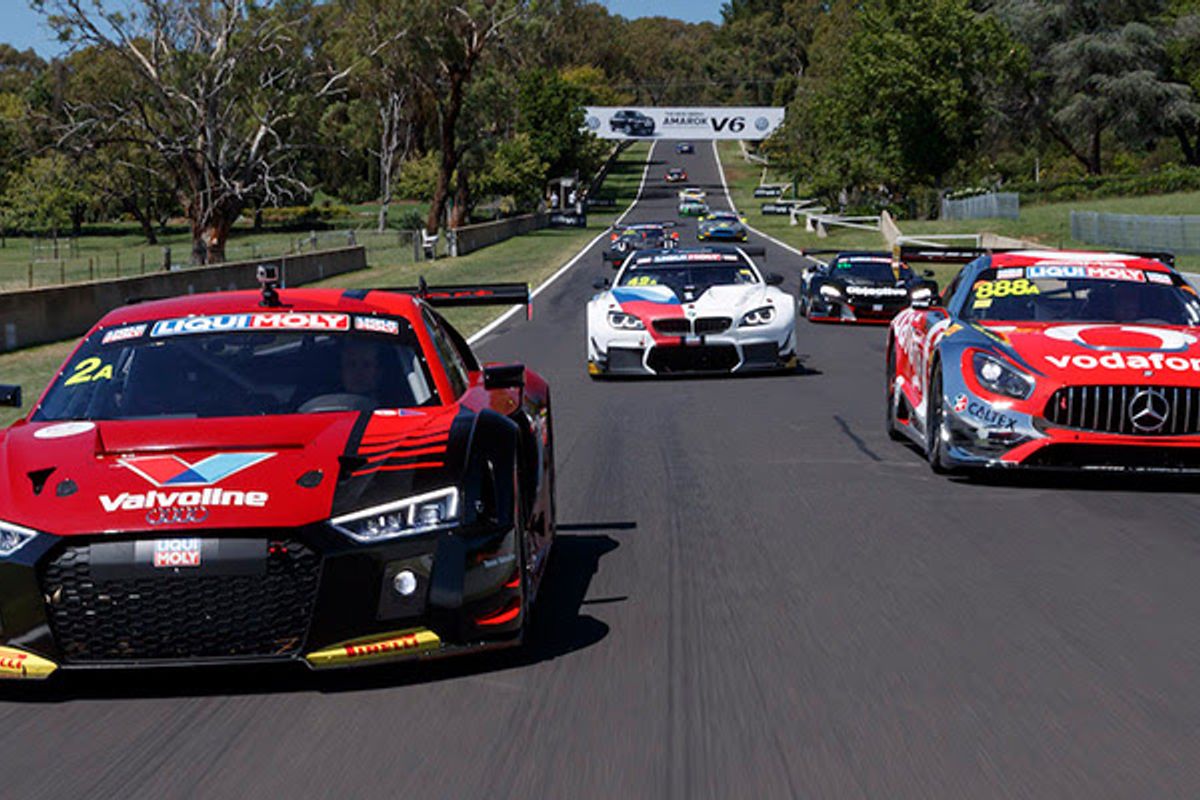 Season Four of the Intercontinental GT Challenge Powered by Pirelli begins this weekend at the Liqui-Moly Bathurst 12 Hour (February 1-3) where a record full-season entry is eager to prevent Audi from making the perfect start to its Manufacturers’ title defence.

Mount Panorama’s annual endurance event has established itself as a firm favourite amongst teams, drivers and fans since GT3 became the premier category in 2011. Intercontinental GT Challenge joined the party five years later when Australia’s most historic circuit, a 6.213-kilometre-long concrete wall-flanked rollercoaster, hosted the championship’s first-ever race. It has staged the season opener ever since.

Question is: can anyone prevent reigning Manufacturers’ champions Audi from claiming a record-breaking fourth overall Bathurst victory and second in as many years?

Remember: each manufacturer can nominate a maximum of four entries to score points this weekend, but only its two best-placed cars at the end of the 12 hours will do so. Meanwhile, drivers competing in all registered entries are entitled to score points towards the Drivers’ Championship regardless of whether they finish amongst their manufacturer’s top-two entries. A separate classification also awards points to those Bronze-graded drivers that have registered to contest the entire Intercontinental GT Challenge season.

The reigning champions return to Bathurst minus the team and crew that won 12 months ago. Most others would consider that a setback. But Audi? No chance! And certainly not when their front-line squad, Audi Sport Team Valvoline, includes the talents of two-time Bathurst 12 Hour winner and Mount Panorama lap record holder Christopher Mies. The equally capable Markus Winkelhock and Christopher Haase complete the all-German crew, while fellow factory drivers Kelvin van der Linde and Frederic Vervisch link up with local hero and three-time Bathurst 1000 winner Garth Tander, just as they did last year when representing Melbourne Performance Center.

Audi’s biggest rivals in 2018 fell just short of the Manufacturers’ title but did at least celebrate winning the Overall and Bronze Drivers’ championships thanks to Tristan Vautier and Kenny Habul, respectively. The latter returns to Mount Panorama 12 months after finishing runner-up eager to make the best possible start to his title defence. Habul is joined at SunEnergy1 Racing by Thomas Jaeger, who claimed Mercedes-AMG’s only previous Bathurst 12 Hour victory in 2013, and 2012 FIA GT3 European champion Dominik Baumann.

But, in truth, it’s the German manufacturer’s three all-professional crews that will likely pose its most serious threat this weekend. International eyes are immediately drawn to the MANN-FILTER entry run by 2018 Suzuka 10 Hours winners GruppeM Racing who have called on the services of reigning and former Blancpain GT Series champions Raffaele Marciello, Maxi Buhk and Maxi Goetz. Then there’s Team Vodafone’s Supercars champions Jamie Whincup, Craig Lowndes and Shane van Gisbergen who all have Bathurst 12 Hour victories to their name. Still not convinced? How about Maro Engel and Luca Stolz teaming up with reigning DTM champion Gary Paffett in the car co-run by Craft-Bamboo and Black Falcon?!

The message is clear: for Mercedes-AMG nothing short of victory will suffice.

Works driver Earl Bamber makes his debut as a team owner with an eponymous two-car entry featuring a mix of Porsche stalwarts and young guns. Romain Dumas, Sven Muller and Mathieu Jaminet join forces aboard 911 while Dirk Werner is paired with Dennis Olsen and Matt Campbell.

Several manufacturers are competing with previous-generation GT3 models this weekend while waiting for new cars to be homologated. Not so Bentley which, having been in a similar position 12 months ago, heads Down Under for the first time armed with its second-generation Continental GT3. Local fans fell in love with its predecessor’s muscular looks and thumping V8 soundtrack, both of which mercilessly remain present and correct.

Bentley Team M-Sport has also named an unchanged line-up from the one that contested much of 2018. The familiar trio of Andy Soucek, Maxime Soulet and Vincent Abril require no introduction while Jordan Pepper – who joined the factory roster following Guy Smith’s mid-season retirement – makes his Mount Panorama debut alongside Jules Gounon and Steven Kane. The latter Bentley Boy previously scored two Bathurst podiums with the original Continental GT3.

Incidentally, both Bentleys feature unusual numbers this weekend, with 100 – a reference to the manufacturer’s centenary – added to its traditional 7 (107) and 8 (108).

The first of 2019’s new full-season entrants will be amongst the favourites to make an instant impression this weekend if its 2018 pole position and rapid race pace count for anything. BMW Team Schnitzer’s entry looks particularly potent given that Chaz Mostert – 2018’s Pirelli Pole Shootout winner – and Augusto Farfus return alongside new team-mate and former DTM champion Martin Tomczyk.

Mind you, Walkenhorst Motorsport shouldn’t be underestimated either. In Christian Krognes, Nicky Catsburg and Mikkel Jensen the reigning Total 24 Hours of Spa winners
have a driver crew every bit as capable as some of their more recognisable rivals. The team returns to Bathurst for the first time since 2017 when its M6 GT3 was withdrawn prior to the start.

However, it’s understandably the sudden passing of Schnitzer’s legendary team principal, Charly Lamm, last Thursday that will be at the forefront of BMW’s thoughts this weekend. Victory would provide a very fitting and emotional tribute.

In 2015 a young Japanese driver arrived at Bathurst largely unknown. He left a cult hero. Katsumasa Chiyo’s penultimate lap heroics not only helped Nissan to claim victory but also reignited Australia’s love affair with the GT-R, which in its previous Skyline guise had dominated domestic touring car competition in the early 1990s.

Now, with KCMG’s help, both are back to reclaim the Mountain once more. Two second-generation GT-R NISMO GT3s will line up at Bathurst when Nissan makes its maiden appearance as an Intercontinental GT Challenge manufacturer.

Ferrari might have been a late addition to 2019’s Intercontinental GT Challenge roster but, in HubAuto Corsa, perhaps holds the joker in this year’s Bathurst pack. After all, the Taiwanese squad – a Blancpain GT Series Asia championship challenger throughout 2018 – claimed pole position during its only Intercontinental GT Challenge outing to date at Suzuka last August. Its all-Australian crew of Nick Foster, Tim Slade and Nick Percat also knows its way around the Mountain.

Add to that Ferrari’s recent success at Mount Panorama – a 488 GT3 claimed victory and pole position in 2017 – and it becomes more difficult to discount HubAuto’s chances on debut.

‘TOWN TO TRACK’ SEES GT3s INVADE BATHURST CITY CENTRE
The inaugural ‘Town to Track’ parade officially kicked off this year’s Bathurst 12 Hour earlier today when 10 GT3 cars – one from each manufacturer competing – were driven on public roads to the city centre.

The sight of 600bhp race-tuned supercars negotiating Bathurst’s suburbs under police escort turned heads as the Bathurst 12 Hour literally rolled into town. Several drivers were on hand to sign autographs and answer media questions before heading back to Mount Panorama in preparation for Friday’s first practice sessions.

‘Town to Track’ is the latest parade to feature on Intercontinental GT Challenge’s schedule. The annual parade has become an important aspect of the Total 24 Hours Spa while Suzuka is also set to follow suit later this year.

LIVE COVERAGE
Fans outside of Australia and New Zealand can watch this weekend’s Liqui-Moly Bathurst 12 Hour live and for free on the Intercontinental GT Challenge website and Facebook page. Practice, qualifying and Pirelli Top-10 Shootout are all live on Saturday ahead of Sunday’s main event. Race coverage starts at 05:30 AEDT (GMT +11).

Australian fans can watch the Pirelli Pole Shootout and race live and for free on 7mate. The same coverage is being streamed live on the 7plus app.