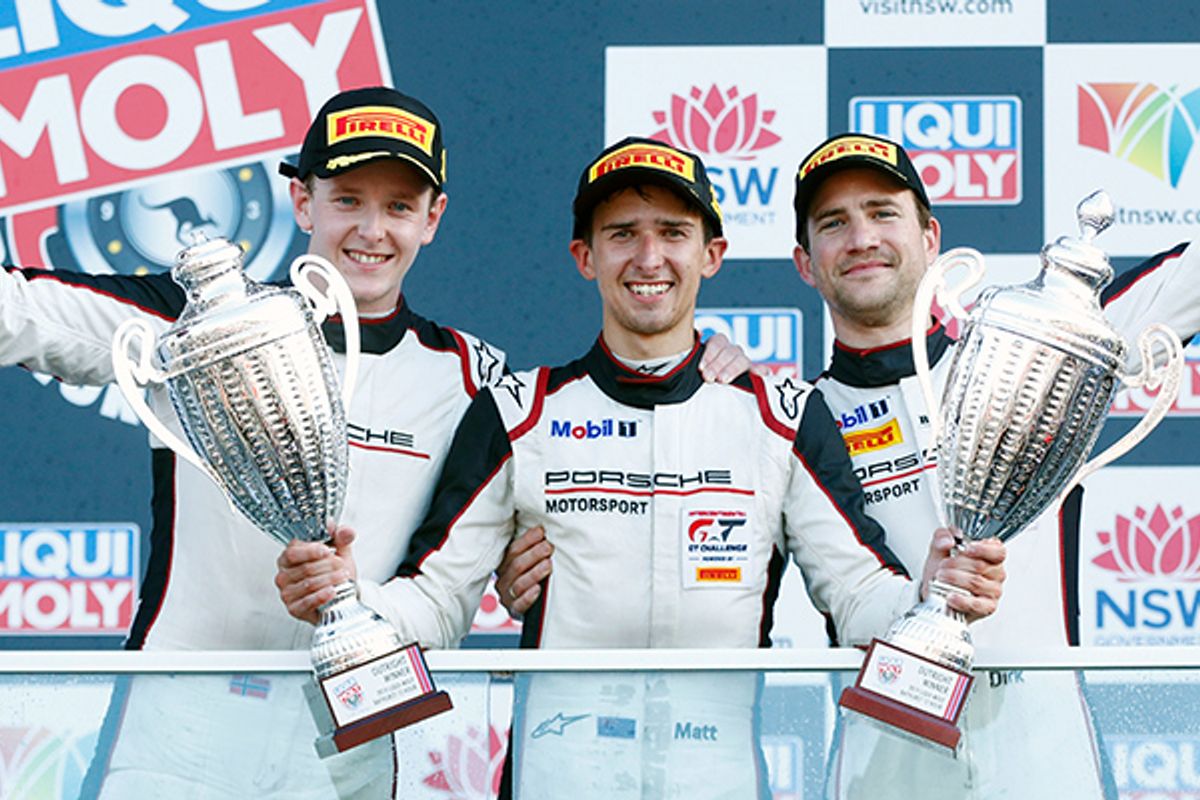 Aston Martin finished second overall but it was Mercedes-AMG that completed the Intercontinental GT Challenge podium following a nail-biting fight between GruppeM Racing and Team Vodafone over the closing stages.

Porsche’s first series and Bathurst victory came on a record-breaking day at Mount Panorama where more laps – 312 – were completed than at any previous Bathurst 12 Hour. 49495 fans also attended over the four days, an increase of 7885 compared to last year’s total, while five manufacturers finished inside the top-six. It was also the outgoing 911’s final outing as Porsche’s frontline GT3 model.

However, even those statistics were overshadowed by a race for the ages that was only decided in the final 10 minutes.

EBM’s two Porsches had remained a constant presence inside the top-10 over the first eight hours but finally hit the front when their alternative strategy, aided by the event’s longest-ever period between Safety Cars, began to play out.

#911 initially led the team’s challenge but when it retired with a power steering issue the sister #912 was perfectly placed to maintain Porsche’s challenge.

Changing tyres at the final pitstop initially dropped local hero Matt Campbell to fourth and seemingly out of contention, but as those ahead on older rubber faded so the Australian began to make headway. He was up to third when the eighth and final Safety Car was called with just 30 minutes remaining, which set up a late-race showdown between the seven cars still on the lead lap.

Campbell wasted no time relieving Raffaele Marciello’s GruppeM Mercedes-AMG of second but found Jake Dennis’ R-Motorsport Aston Martin harder to pass. That was until the Briton left just enough room for the Porsche to squeeze past on the inside of Elbow Bend with less than 10 minutes remaining.

Further back, Marciello’s rapidly deteriorating tyres had given Shane van Gisbergen (Team Vodafone Mercedes-AMG), Chaz Mostert (BMW Team Schnitzer) and Andy Soucek (Bentley Team M-Sport) a sniff of the final overall podium spot. However, the Italian produced a defensive masterclass to hold off all three despite the best efforts of Van Gisbergen who ended up just 0.2s behind.

Bentley’s second Continental GT3 also had the pace to challenge but was restricted to eighth after slipping off the lead lap.

With HubAuto’s Pro class-entered Ferrari hitting trouble early on the manufacturer’s hopes instead shifted to Spirit of Race’s Paul Dalla Lana, Pedro Lamy and Mathias Lauda whose 488 GT3 bounced back from Friday’s practice accident to win the Pro/Am class by finishing ninth overall.

On pace alone, Audi Sport Team Valvoline’s two R8 LMS GT3s would have been victory contenders. However, separate incidents for both the #2 and #22 entries ended the manufacturer’s chances of back-to-back Bathurst victories before the halfway mark. Its other Intercontinental GT Challenge nominated entry, the #9 Melbourne Performance Center car, at least salvaged two points for coming home 10th overall and ninth of the Intercontinental runners, while #2 also scored a point.

Round two of the world’s only global GT3 championship takes place at the California Laguna Seca 8 Hours on March 28-30.

Matt Campbell, #912 EBM Porsche 911 GT3 R: “It’s absolutely phenomenal. To win my home event like that, and especially for EBM in their first GT3 race, is pretty amazing. I just love this joint [Bathurst] and to finally get the Bathurst 12 Hour win feels awesome! It wasn’t easy – the cool-suit, helmet fan and drinks bottle all failed at one point – but we made it through. I gave it absolutely everything and left nothing on the table. I’m ecstatic. I knew where we were faster than the Aston Martin so had to pick my moment and commit. We made it stick. Phenomenal!”