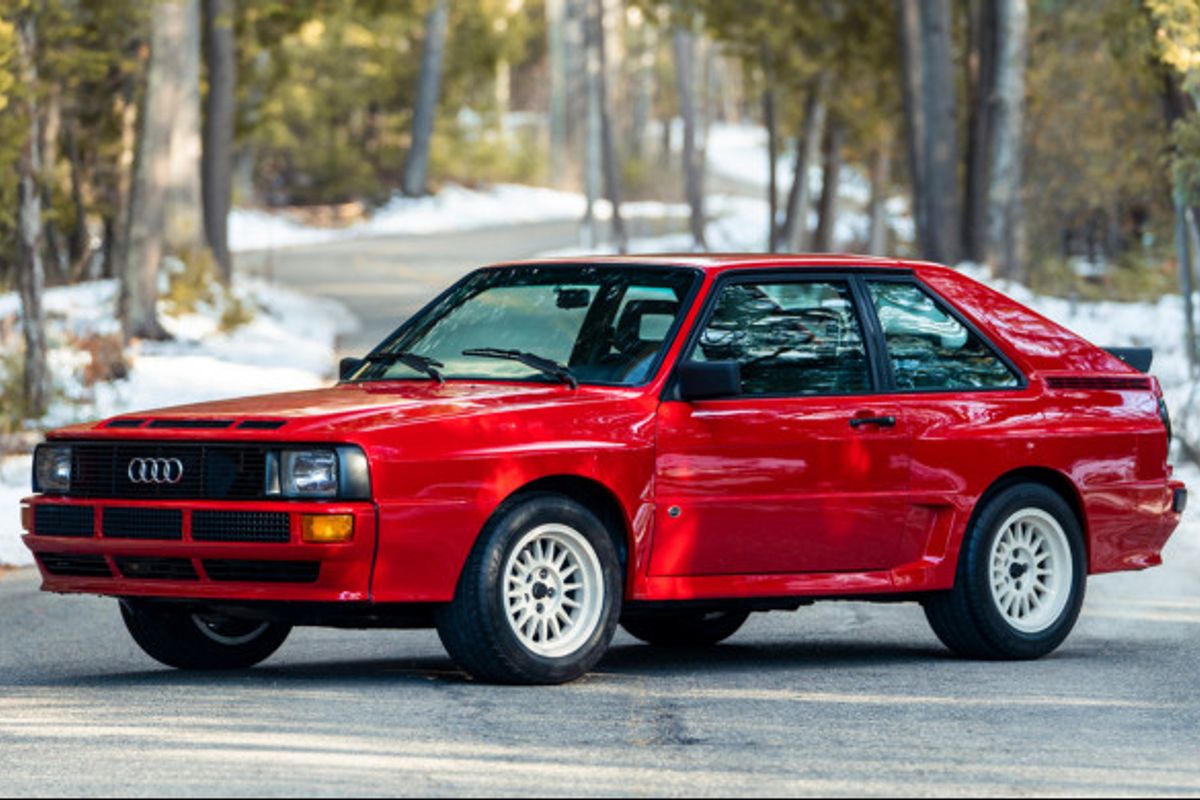 THIS CAR
With the advent of the FIA’s Group B rally rules in 1982, Audi soon found its previously stalwart Quattro being outpaced by entries from Opel and Toyota. In response, in 1984, the company formulated a new race car which utilized a shorter wheelbase and an aluminum-alloy five-cylinder engine with dry sump lubrication, packaging it in a lightweight body made of fiberglass, aluminum, and carbon fiber-reinforced Kevlar.

Still employing Audi’s famed all-wheel-drive platform, the new Quattro proved to be an instant champion as Stig Blomqvist won the 1984 Driver’s and Constructor’s World Rally Championship. Just 214 examples of the new model were built, 161 of which were finished as road versions to satisfy the FIA’s homologation requirements. These rare road cars, such as the example offered here, were never available for sale in the US, making American-owned examples quite rare.

This beautifully maintained Sport Quattro was purchased out of Europe by Robert “Bob” Fergus of Columbus, Ohio. Mr. Fergus – a respected pilot and racing privateer who was one of the first and most influential VW-Porsche distributors in the Ohio/Kentucky region – amassed both planes and racing sports cars in Ohio and Florida over several decades, boasting a collection that included a Jaguar C-Type, a Ford GT40, a Ferrari Testa Rossa, and two Bugattis. But the Sport Quattro was clearly one of Mr. Fergus’ favorite cars, as he regularly showed it off during hot laps at a track near his Florida home. James K. Dobbs III admired the Audi there several times, and Mr. Fergus occasionally tried to sell him the car. The Quattro passed to Mr. Fergus’ son in 1998, and Mr. Dobbs acquired the car in July 2001.

A substantial maintenance record shows that the Audi benefited from regular mechanical attention from that point forward, including major belt services in 2001 and 2007. In early 2002, the brakes were freshened with new pads and calipers, and the wheels were powder coated. Then, in 2007, the car was prepped for road rally use, and the air conditioner received a new compressor and lines.

This Sport Quattro’s story was recounted in a full feature article in the June 2016 issue of Grassroots Motorsports, in which writer Tom Suddard exclaimed, “The acceleration was completely bonkers…Wheelspin was nonexistent…The reward? Truly ludicrous speeds…The Audi dances on its soft, rally-tuned suspension in the most pleasurable of ways. It feels alive, electric.…”

Offered with service invoices, this well-maintained Sport Quattro benefits from minimal use by three known caretakers, and displayed 25,329 miles at the time of cataloguing. It is a perfect acquisition for any Group B enthusiast or marque collector, enjoyable as a display-worthy testament to Audi’s motor sports triumphs.

To be offered at Gooding & Company Amelia Island Auction March 8, 2019