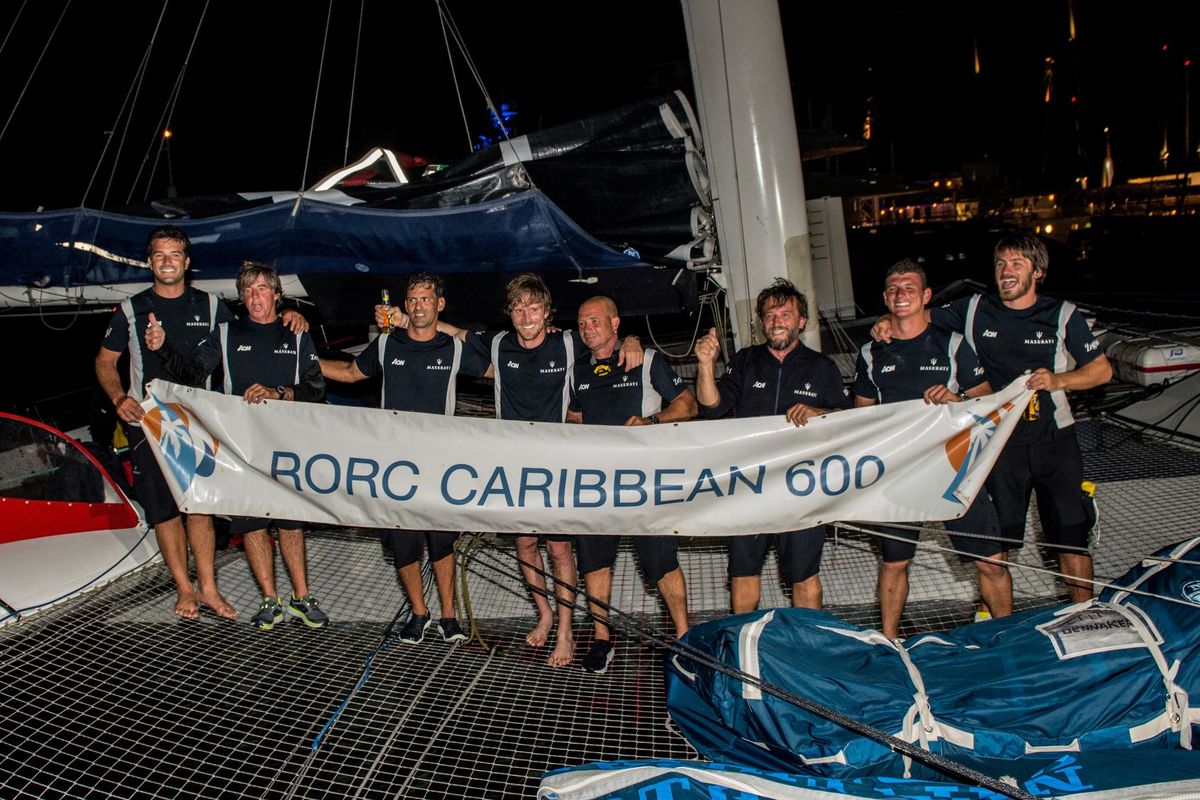 At 20:49:00 on Tuesday 19 February local time (00:49:00 on Wednesday 20 February UTC) Maserati Multi 70 was the first to cross the finish line of the 11th edition of the RORC Caribbean 600, organized by the Royal Ocean Racing Club, winning Multihull Line Honours and setting the new race record. After racing neck and neck with American MOD 70 Argo for the last 30 miles, Maserati Multi 70 finished the race with an elapsed time of 1 day, 6 hours, 49 minutes and 0 seconds. Argo crossed the finish line at 20:56:04 local time, 7 minutes after Maserati Multi 70.

The RORC Caribbean 600 starts and finishes in Antigua. The race course is 600 miles long and heads North as far as Saint Martin and South to Guadeloupe, taking in 11 islands in the Lesser Antilles, in the Caribbean, including Barbuda, Nevis, Saba and Saint Barth.

Maserati Multi 70 and American MOD 70 Argo, skippered by Jason Carroll, set off from Fort Charlotte, Antigua, at 14:00 local time (18:00 UTC and 19:00 Italian time) on Monday 18 February, competing in the Multi/MOD 70 class. The Royal Ocean Racing Club specifically created the class for the two trimarans, following the decision to delay their start to allow Argo’s team to finish the repair work after they capsized during a training race on Friday.

Soldini explains: “It was a really great race, the wind was strong and we had to perform several manoeuvres. On the first leg, as we slalomed around the Northern islands, we were able to outdistance Argo and to gain a significant advantage over our direct competitor: I must really compliment the crew for the clean and precise manoeuvres”.

On Tuesday morning (local time), the Italian trimaran reached Guadeloupe, the most critical leg of the race: the tall mountains on the island negatively affected the wind. Giovanni Soldini and his team therefore decided to sail a few miles from shore and they were able to reach Les Saintes, the southernmost point of the course, without losing too much speed.

“After we reached Guadeloupe we had a problem with the solent, the main headsail, which made us lose a lot of time. For many hours we were forced to use only the foresail so we lost most of the advantage we had, until we were able to solve the problem”.

The Italian crew is satisfied with the performance aboard Maserati Multi 70. Giovanni Soldini comments: “We’re really happy about Maserati Multi 70: after two years of work the boat is in great shape and we learned how to sail her quite well. Every manoeuvre aboard requires loads of operations, many more than aboard a classic MOD 70, but now we’re able to do it super quickly”.

Giovanni Soldini and his Team hope to reconfirm these excellent results during the Newport to Cabo San Lucas Race, starting on 17 March 2019, the next event in Maserati Multi 70’s 2019 Racing Season.