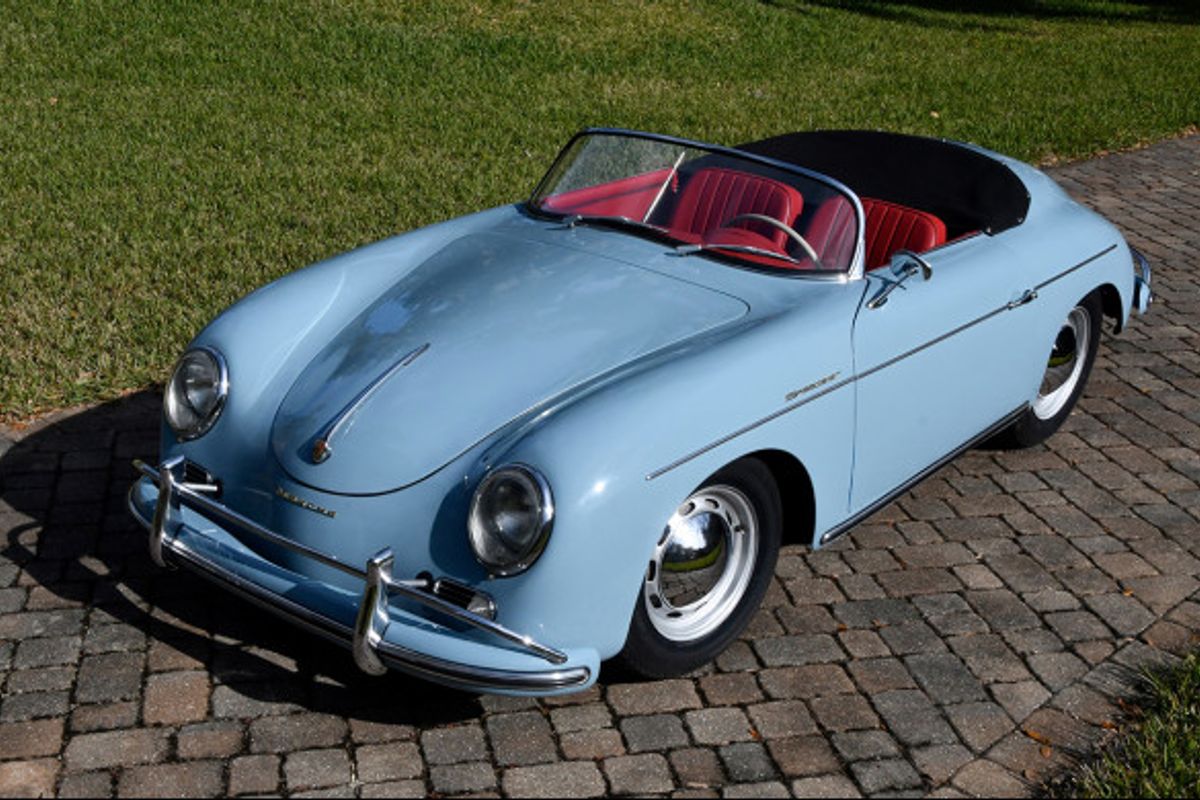 To be offered by Gooding & Co

Developed at the request of Max Hoffman, the New York-based distributor for Porsche cars during the 1950s, the 356 Speedster was a purpose-built machine intended to compete with other alluring yet less-expensive English sports cars from MG, Austin-Healey, and Triumph. Stripped of nonessential items to save cost and weight, the Speedster featured a removable windshield, lightweight bucket seats, and a basic folding top with side curtains. Offering the performance of a club-racing contender, the 356 became a sales success upon its introduction, with 4,145 examples constructed from 1954–1958.

Throughout its production run, the Speedster was redesigned with numerous small but significant changes including a curved panoramic windshield, modified front-lid handle, horn-grille-mounted front indicators, and one-piece tear-drop taillights. Performance was enhanced through the availability of more powerful engines. The addition of wider wheels and tires, front anti-roll bar, updated steering linkage, and softer springs improved handling and tamed oversteer.

Chassis 83828 is one of 1,131 T-2 356 A Speedster examples, production of which began in early 1957. While its Kardex lists scant information, this example was delivered to first owner Charles L. Arnett of Berlin and then sold to Todd D. Ritter of Jacksonville, Florida. Retained by Mr. Ritter for a short time, the Speedster was acquired by fellow Jacksonville resident Wallace Davis in May 1958. Mr. Davis would keep the Speedster until February 1996, when it was acquired by its current enthusiast owner.

Under the consignor’s auspices, a restoration of the Speedster commenced in 1997 and was completed the following year. The car was disassembled and found to be largely original with properly date-coded wheels, fuel tank, and gauges. Brightwork was replated or replaced and a new top was fitted. A replacement Type 616/1 engine was sourced and rebuilt with larger 1,720 cc pistons and cylinders, a 1965 356 C camshaft, and 912 crankshaft and rods. The original Zenith 32 NDIX carburetors were retained. Making this car more enjoyable to drive, it produces an estimated 75 bhp instead of the original unit’s 60 bhp.

In the current owner’s care for more than two decades, this Speedster has been enjoyed, driven, and exhibited at numerous concours events, including the Porsche 356 Registry’s East Coast Holiday (1999, 2016), 2015 Lake Mirror Classic (Sponsors Award), and 2017 Werks Reunion Amelia Island. Recently repainted and re-trimmed in what are believed to be its original colors – Meissen Blue over red – this iconic 356 A Speedster is poised for spirited touring and further showings.