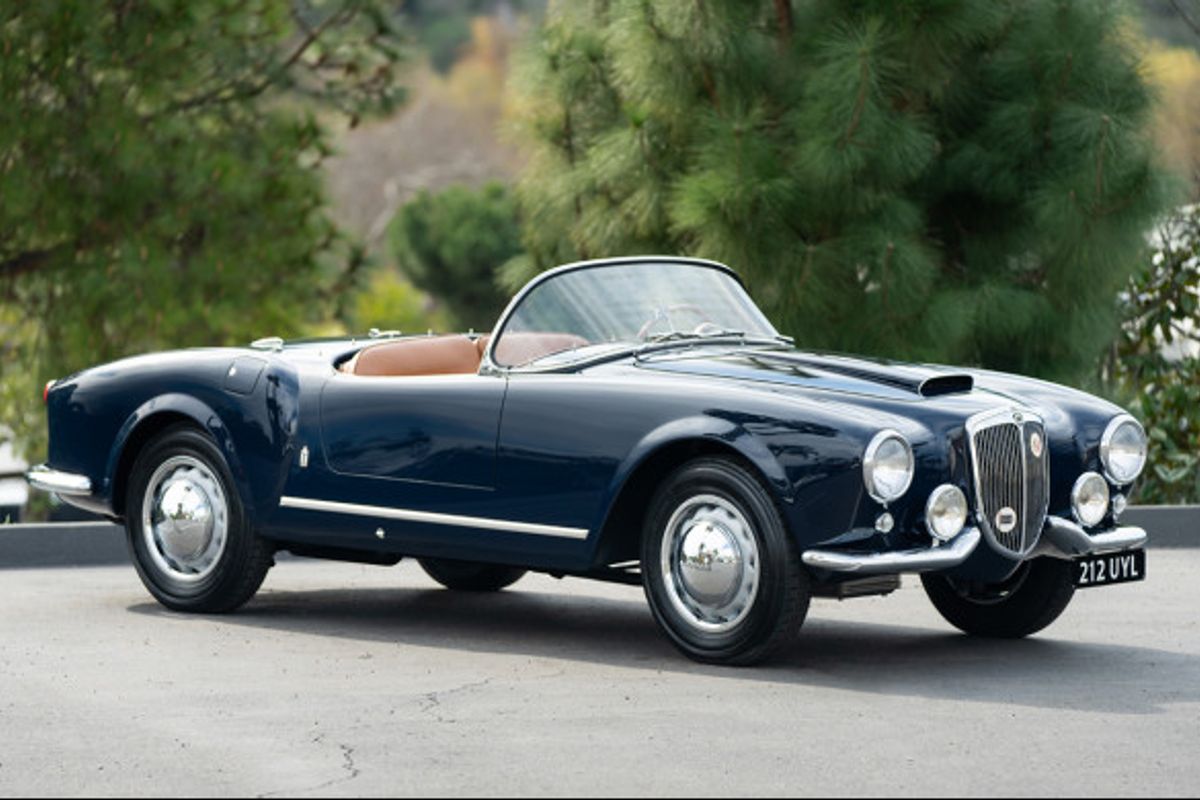 At the Torino Motor Show in May 1950, Lancia demonstrated its technical prowess with the introduction of the B10 Aurelia. Equipped with the world’s first production V-6 engine, the new model was quickly developed with advanced chassis components such as a rear-mounted transaxle, inboard rear brakes, and four-wheel independent suspension. The B20 Aurelia GT’s sporting potential was realized in 1951 when it was 1st in Class and 2nd Overall at the Mille Miglia, as well as 1st in Class at the 24 Hours of Le Mans.

Lancia further widened the Aurelia model range in January 1955 at the Brussels motor show with the debut of the B24S Spider America, an open version based on the fourth-series cars. Utilizing a standard floor shifter and a shorter, more nimble chassis than its predecessors, the Spider employed the updated 2.5-liter V-6 and a De Dion rear axle, and was clothed in breathtaking Pinin Farina coachwork, notable for its wraparound windscreen, tiny cut-down doors, and split bumpers. A scant 240 examples were built, including 181 configured for left-hand drive, before the Spider America was replaced by a more conservatively styled convertible with permanent weather equipment.

This beautifully presented mid-production example of Lancia’s timeless Spider benefits from almost two decades of storage, followed by an extensive, bare-metal, rotisserie restoration to show standards that concluded in early 2019. According to its Lancia Certificate of Origin, chassis 1170 completed assembly in late October 1955, equipped with engine no. 1229, which remains in the Spider today. Subsequent research by the consignor reveals that chassis 1170 was the sole example finished in Alacio Verde (Light Green) over a Natural Tan leather interior. Additionally, stampings on the steering box, transaxle, and body shell match the data on the certificate of origin.

According to the consignor, this B24S is long rumored to have been ordered new by a US Air Force officer stationed in Rome, which would explain the unique combination of European-specification features (lighting and an open-style glove box) with instruments in English. The car reportedly remained in Italy for several decades before being acquired in 1981 by Ken Wyatt, the personal assistant to the bass player of The Who, John Entwistle. As Mr. Entwistle’s cars were generally registered in Mr. Wyatt’s name, it is possible that this Lancia actually belonged to the famed musician.

Refinished in red with black upholstery, the Spider was exported to the UK with the British registration “WYA 8.” In late 1982, the engine was rebuilt by Weylock Automobiles in Surrey, and the Lancia was sold in spring 1985 to Paradise Garage in London. The Aurelia was purchased in July of that year by Robert Heisey, an American seed specialist working in Parma, Italy. Shortly thereafter, Mr. Heisey returned to the US, relocating his family to Florida. The Spider America was driven for a few years in the Sunshine State before the family moved to Gilroy, California, where the car was reportedly domiciled in storage for approximately 25 years.

In August 2014, while exhibiting the charming patina of a garage find, the largely original and unaltered Aurelia was sold to Pierre Mellinger of Warsaw, Poland. Mr. Mellinger initially shipped the B24S to the UK before commissioning GPS Classic S.r.L. in Soragna, Italy, to freshen the car as needed for event use. The Spider was then entered in a variety of European tours and exhibitions over the next few years.

By early 2018, the Lancia was acquired by the Southern California-based consignor. Under his care, the Spider underwent a substantial, photodocumented restoration by the respected Alan Taylor of Escondido, including a premium refinish of the coachwork in Dark Blue and an interior re-trim in Cognac leather. Upon disassembly, a photographic inventory of the Lancia’s numerous original number stampings was performed, including the rarely seen Pinin Farina logo stampings hidden within the body structure. A photo gallery of these stampings is available for review. Further work included restoration of the engine bay, undercarriage, and hardware to a high level of detail. Mechanical elements were also addressed, ensuring this Spider is as well suited for touring events as concours d’elegance.

Offered with its certificate of origin, a rare factory brochure, and hundreds of restoration photos that underscore the full extent of the work, both mechanically and cosmetically, this exquisite B24S benefits from the care of just three dedicated owners over the last 34 years. A true rarity, Spider Americas are eligible for countless motoring events worldwide and ideal for presentation at most any concours d’elegance. A masterpiece of design in both style and engineering, the Spider America may comfortably take its place in the ranks of the greatest sports cars of all time.