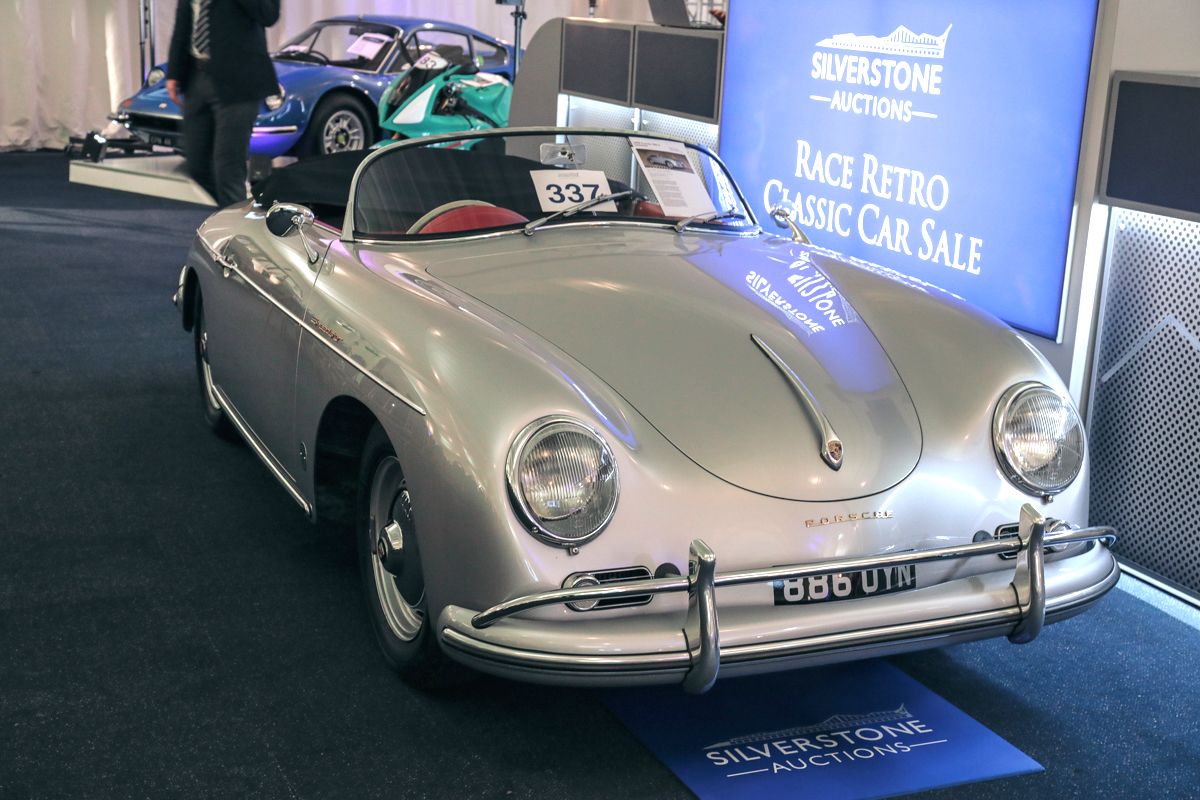 Silverstone Auctions successfully hammered away 69 per cent of lots at its eighth annual sale at Race Retro powered by Motor Sport held at Stoneleigh Park at the weekend.

With a varied catalogue including classic cars, competition cars and bikes, the auction achieved total sales of £2.8 million including premium. The results mirror the auction house’s success at its January sale, suggesting stability on the auction market so far this year.

“Once again the Silverstone Auctions team has seen fantastic results at our annual Race Retro sale,” comments Guy Lees-Milne, general manager, Silverstone Auctions. “Online bidders from all around the world joined a very full auction hall, and multiple cars sold above their pre-sale estimates, which is an incredibly positive result for the market.”

Highlight results of the sale included a restored 1958 Porsche 356 A Speedster which sold for £292,500 to a telephone bidder. Originally supplied to New York, it was later acquired by a noted collector and converted to right-hand drive in the UK.

Among the modern classic hot hatches in the sale, a one owner from new 1979 Volkswagen Golf GTi Mk1 stormed past its estimate selling for £27,225, more than £10,000 above its lower guide price, after a long bidding war in the room.

A wide selection of competition cars also performed well at the sale, with a 1964 Elva-BMW Mk 7S (FIA), with extensive race history and multiple class wins, going to a new owner for £76,500, more than £20,000 above its lower estimate.

A left-hand drive 1964 Porsche 356C Road Rally with 25 years of competition history also sold  significantly over estimate, with the hammer finally falling at £69,750 including premium. From the same era, a left-hand drive 1964 Ford Falcon Sprint FIA touring car prepared by Martin Stretton Racing reached a sale price of £61,875, selling to a buyer in the Netherlands. Finally, an attractive 1966 Ginetta G4 in ready to race condition crept past its guide price when purchased by a telephone bidder for £31,275.

“We’re now preparing our next sales which are two brand new events for 2019 taking place in May. We’re seeking quality consignments but there are limited spaces, so anyone who is interested in selling with us should contact Silverstone Auctions early to avoid disappointment,” concludes Guy.

‘The Heythrop Classic Car Sale’ and ‘A Sale of British Marques’ in association with Jaguar Enthusiasts Club will take place on 10th and 11th May at Heythrop Park in Oxfordshire. Vendors benefit from just 5% + VAT seller’s commission.

Click here for all the results from the Race Retro Sale