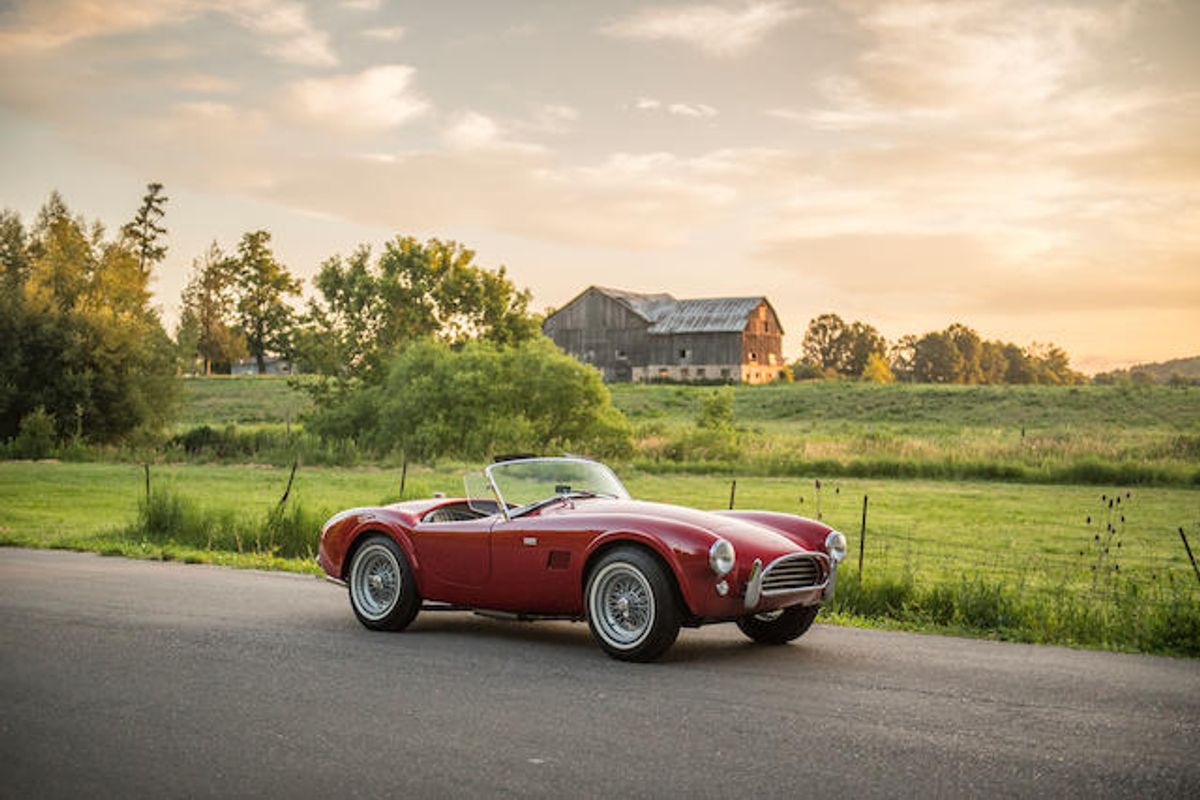 Though often told differently, The Shelby Cobra's story is one of great reverence. A.C. (Auto Carrier) Cars, Ltd., was a boutique British automaker established in 1908. Originally makers of small delivery vehicles, the company got into sports cars in the 1920s. After World War II, there was a sports car hiatus. The company built some invalid cars; however, in 1954, the Ace debuted. Built by John Tojeiro, the Ace exhibited a new tube-frame car with all-independent suspension. From 1956, A.C.'s own engines were supplemented with outsourced units from Bristol and Ford of England.

Meanwhile, Carroll Shelby, a chicken farmer turned racing driver, approached A.C. about putting American V8s into the Ace chassis. Shelby had initially been interested in Chevrolet's small block engine, but General Motors turned him down, no doubt because of concerns over competition for the Corvette. A.C.'s Charles Hurlock expressed interest in the proposition, and shortly thereafter, in October 1961, Shelby learned of Ford's new small block V8, slated for introduction in the 1962 intermediate Fairlane model. Ford was more than eager to do business for the exact reasons that Chevrolet declined.

An example of the new engine was sent to England, where A.C. found it an easy fit. This was in part because of their experience with the British Ford six. This prototype chassis, number CSX2000, was then shipped to the United States, sans engine. The first 75 Cobras, a name that reportedly came to Shelby in a dream, were built with 260 cubic inch high-performance Ford engines. The later cars used the 289-cubic inch unit with similar high-performance upgrades. The Ace's differential had been uprated to a stronger Salisbury unit, as used in E-Type Jaguars, and the steering box, a worm-and-sector design, was moved outward to clear the engine. Disc brakes were used throughout.

Production ramped up slowly during 1962, nonetheless, in October, the Cobra contested in its first competition at the Los Angeles Times Grand Prix. It retired with a broken hub, but not until showing the Corvettes that it would be a force to be reckoned with. Toward the end of the year, A.C.'s chief engineer, Alan Turner, redesigned the front end to take a more precise rack-and-pinion steering arrangement. Early in 1963, the new chassis became effective with car CSX2126.

Rightfully regarded as one of the all-time great classic sports cars, the Shelby Cobra remains one of the most iconic and collectible cars ever made.

This 1964 Shelby Cobra 289 is a striking example of Carroll Shelby's potent intercontinental sports car. At first glance, one immediately notices the sporty red paint, correctly painted wire-wheels, and appropriate white sidewall tires - all of which are described in the original specifications and early pictures of CSX2328. According to this Cobra's extensive history file, Mr. Dodge Olmstead purchased CSX2328 on October 29th, 1964 from Cherner Motor Company in Washington, DC. As the copy of the original invoice states, the Roadster was well optioned with white sidewall tires, a luggage rack, wind wings, seatbelts, a radio, and an external rearview mirror- totaling $5791.75. Mr. Olmstead kept his red Cobra for about two years before trading it in February of 1966 with a 427 Cobra, CSX3173, through Archway Motors in Baltimore, Maryland. The next owner, Army Lieutenant Robert Whittacker, brought CSX2328 to Florida and painted the car a flamboyant metallic green. Then, before 1972, it was acquired by Michigander Mr. Ray Angus, who chose a demurrer silver for this Cobra. In the spring of 1974, noted Cobra expert and restorer Mr. Bill Kemper acquired this Shelby and returned it to its original red paintwork. In 1986, Mr. Seymour Levin acquired this special Shelby Cobra. For 24 years, he housed it in his collection in Pennsylvania before finally parting with it in 2010. That year, this car was given a sympathetic mechanical refresh before being sold to another enthusiast. When the previous owner purchased CSX2328, he made the decision to restore the exceptionally authentic Cobra to its original splendor. Importantly, the Cobra remained in largely original condition, with no records or signs of damage or misuse.

Today, the Cobra's original drivetrain operates wonderfully and possesses immense drivability thanks to rebuilt suspension and braking systems. Being a late production 289, this car is equipped with desirable, robust rack and pinion steering, factory side vents, and Ford electrics with Stewart Warner gauges- a combination considered the most desirable of all 289 Cobras. As one might imagine, given the extent of the restoration, this car is beautifully presented throughout. The original aluminum body is straight, and the vibrant red paintwork envelops the curvy lines exquisitely with a great luster. The exterior is capped off by the car's original accessories, resplendent with an external rear view mirror, wind wings, wire wheels, front bumper, and white sidewall tires.

CSX2328 is an excellent, numbers-matching example of the iconic Cobra complete with an extensive history file including: a picture of the car brand new with its original owner, the Shelby American order sheet specific to this car, the original customer copy of the bill of sale, the canceled check for payment in full, the original factory brochure, the factory invoices, and is noted in the Shelby American World Registry. Few cars have the iconic status of the original Cobra and combined with the drivability and condition of this example, this 289 is a great opportunity to acquire a timeless classic.