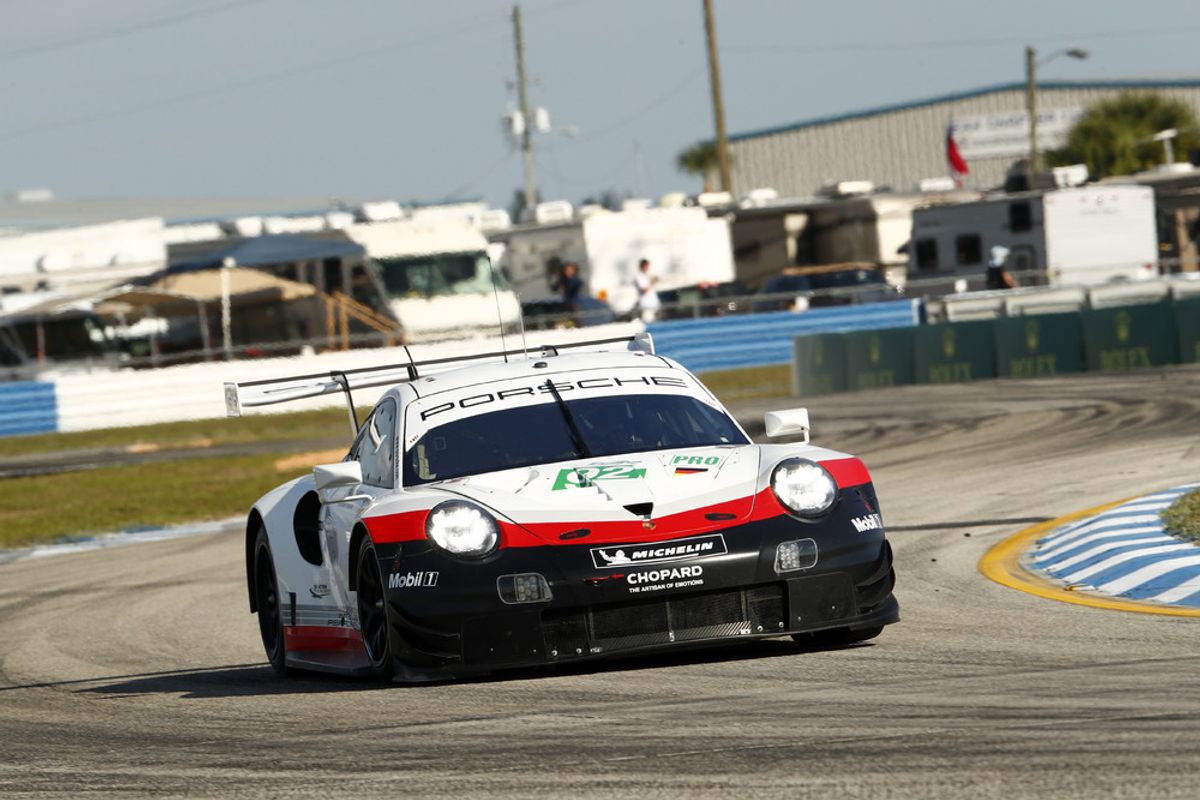 The Porsche GT Team kept both factory cars in the pit lane during the opening phase of the qualifying in an attempt to avoid heavy traffic during the hunt for top times. Christensen made the best use of the situation with a fast lap time; his teammate Estre turned a perfect lap utilising all the grip of his fresh tyres. The combined time of 1:57.500 minutes put the duo at the top of the time sheet and earned them an additional championship point. Bruni at times encountered heavy traffic during his qualifying attempt. Porsche Young Professional Matt Campbell was the fastest in the GT-Am class. The Australian, who won the Bathurst 12-hour race in Australia at the beginning of February, will take up the race over 1,000 miles (or eight hours) from the first grid spot with his teammates Christian Ried (Germany) and Porsche Junior Julien Andlauer (France).

Qualifying quotes
Pascal Zurlinden (Director GT Factory Motorsport): “It’s simply perfect when you score pole position with the world-championship-leading car and earn an additional point for it. That’s how we imagined our Sebring performance. It’s also a great pleasure to see how well our customer teams have positioned themselves for the long race, with first, second and fifth on the grid. A huge compliment to the Project 1 squad. They had to build up a completely new car after an incident in the test prior to the race weekend.”

Richard Lietz (Porsche 911 RSR #91): “We managed to find an excellent balance for the car. Our changes to the suspension setup were perfect. The car ran very well in qualifying. As opposed to our competitors, we didn’t use the second set of fresh tyres. We hope that this strategy will pay off for us in the race and that we can make the most of this advantage.”

Gianmaria Bruni (Porsche 911 RSR #91): “We’re probably the only team who opted out of using another set of fresh tyres. That was the right decision, because early on in my qualifying stint the track was so dirty that the first lap was only good for cleaning up the rubber. In the second lap I caught up to an Aston Martin. Otherwise I would have definitely done better than position eight.”

Kévin Estre (Porsche 911 RSR #92): “Once again Michael did a super job. He’s always fast, but he’s particularly strong in qualifying. He turned an awesome lap. We also had a bit of luck and the right strategy. We went out late and that gave us the advantage of having fresher tyres in the final phase. The point we earned is important for the world championship. I feel optimistic for the race, because the car is obviously really strong in the cooler night-time asphalt temperatures.”

Michael Christensen (Porsche 911 RSR #92): “Our car was absolutely perfect. I simply felt really good with the qualifying conditions. The top lap time came automatically. Kévin also made the most of the huge potential. We now have a perfect starting position, but we have to see how it’ll turn out in the race. The track conditions change enormously from day to night.”

Jörg Bergmeister (Porsche 911 RSR #56): “There’s one thing you shouldn’t forget: After our incident in the test we were at a disadvantage compared to the other teams because we missed out on a test day and a free practice session. Under these circumstances, qualifying on second place is absolutely great. I was held up slightly during my first flying lap. Even more would have been possible.”

Matt Campbell (Porsche 911 RSR #77): “The car was simply fantastic to drive in the qualifying. Our team systematically improved the Porsche 911 RSR, so that we were able to achieve P1 in qualifying. The grid position for the race is now perfect. I hope we can now utilise the huge potential over the long distance.”

Matteo Cairoli (Porsche 911 RSR #88): “We’re taking up the race from the fifth grid spot. I had expected to do better, but we’ll make the most out of it. We have to work a bit on the car; the setup can still be tweaked. We’re heading into the race feeling optimistic. Anything is possible in a long distance race at Sebring.”