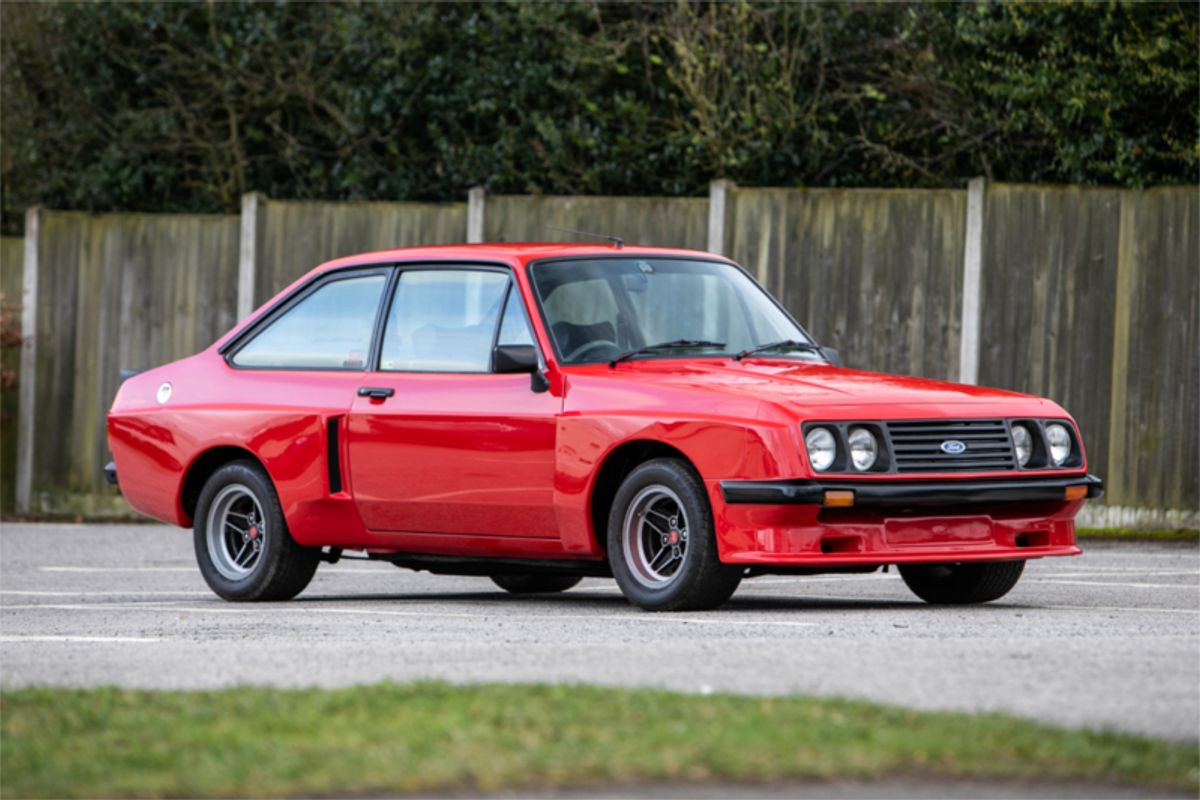 Classic Car Auctions (CCA) sale on the 23rd and 24th March have a number of very special classic fast Fords for auction at the Practical Classics Classic Car and Restoration show being held at the NEC, Birmingham.

The real stand out car has to be this completely genuine, unmodified and original 1977 Ford Escort RS2000 X- Pack. The car has been in the same family for 30 years and is fresh out of dry storage and now looking for a new home. This car was used as the original Tricentrol publicity car and displays nearly all of the X-pack performance options. The car comes with a massive history file, but will require some light recommissioning before going out on the open road. Estimate £30,000 to £38,000.

The ‘80s were well known for car manufacturers producing hot hatches to suit a variety of budgets, and it got very competitive. Ford hotted up a lot of their range and the Escort came in a variety of guises, including this RS1600i which has had a full nut and bolt restoration to mostly the original specification. Only 2,500 of these cars were produced for the UK market and it is thought that only 95 are still on the road, making this car a very special collectable. With 79,100 miles on the clock and fresh MOT from a Ford main dealer this car is estimated at £20,000 to £25,000.

Continuing Ford’s theme of hotting up their models the Fiesta also got the treatment and this car is amazing. This 1984 Fiesta XR2 was supplied by the Ford “Employee Scheme” back in the 1980s by a friend of the current owner’s family. It was then used for only two years, by one lady, before it was put into storage in 1986. The car has covered just 23,670 miles and has been garaged throughout its life. It comes with extensive history and is a real rarity, making it one for a serious Ford collector. Estimated at £14,000 to £18,000 this could be a great investment.

As well a making hot hatches, Ford also made muscle cars, possibly the ultimate is the Ford Mustang. This 1968 model is a very rare edition, being a CS GTS, of which only 3,867 were made. The car comes with extensive history, the original bill of sale and over fifty years of receipts, as well as a photographic record of restoration in the early 2000s. This is an extremely

Gary Dunne from CCA commented “We are known for selling fast Fords and again we have a terrific selection to choose from. The Escort RS1600 is going to be one to watch as we sold a similar car last year which went for a record price of £46,000 including fees. The X-Pack is also very special and it will be interesting to see what it achieves. I do love the Fiesta XR2, a great story and very well preserved. The Mustang is a great looking car and this particular one is extremely rare, so one for the collector.”

If you are a Ford fan, the Practical Classics Classic Car and Restoration Show will be the place to be, with at least twelve different specifications of Fords available in the sale.