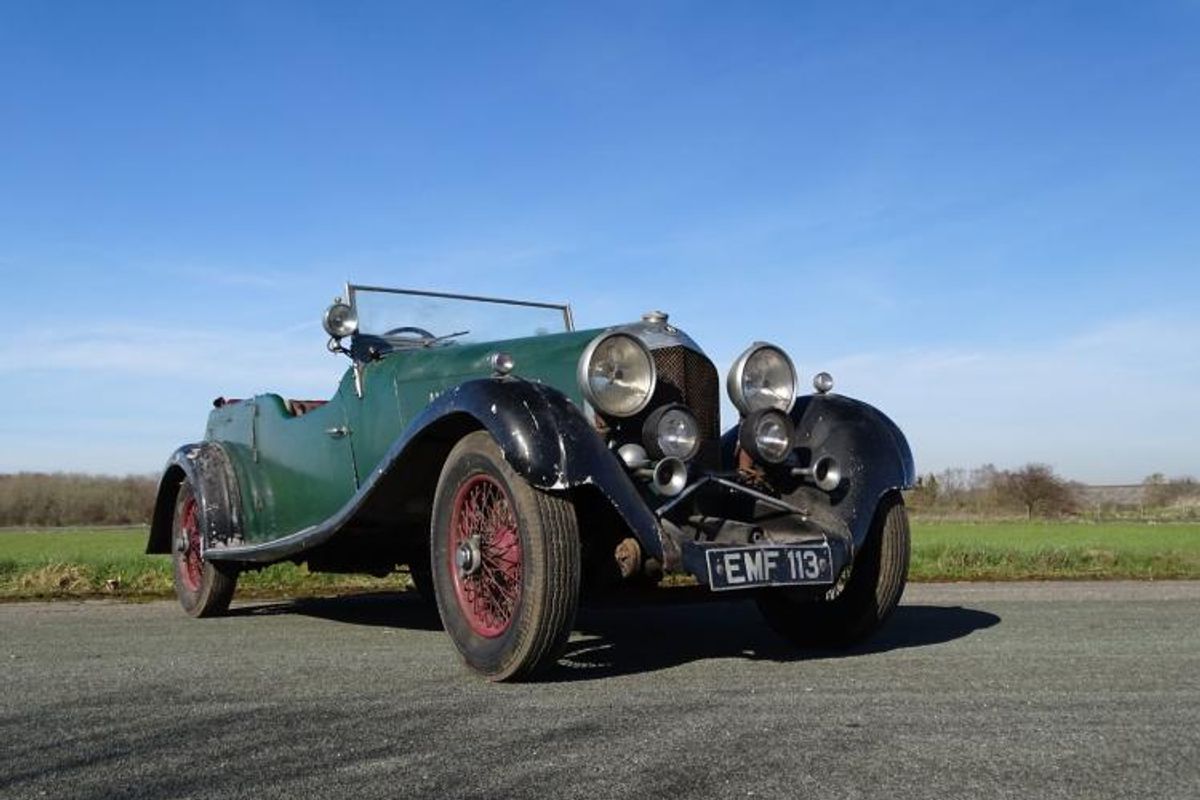 Rolls-Royce's takeover of Bentley Motors Ltd in 1931 prompted the founding of a new Service Department for the latter's existing customers (many of whose cars were still under warranty). Based at the Kingsbury Works, Hendon, North London and staffed by ex-Cricklewood stalwarts such as Nobby Clarke (former Racing Team Manager) and Hubert Pike (ex-Director), the new concern inherited a large cache of new old stock and reconditioned parts. Maintenance and repair work on W.O. Bentleys began to tail off during 1936 as the last of the five year guarantees expired. Determined to keep the Service Department busy, Clarke and Pike came up with the idea of building ten R.C. (Reconditioned Chassis) Series cars - six 4½ Litres and four 3 Litres.

Chassis RC41 - RC45 were clothed by Vanden Plas with handsome aluminium two-door, four-seater Tourer bodies, while RC46 was bodied by Corsica as a Four-Door Saloon. Proudly shown to first owner Colonel Guy Bedford in the Service Department whilst he was collecting a 3 Litre that he would later part-exchange for it, Chassis RC 41 was road registered as 'EMF 113' on September 1st 1936 and issued with a one-year guarantee. A wealthy businessman who ran the chemical giant Geigy UK Ltd (later Ciba Geigy and now Novartis) and was a frequent visitor to Switzerland, Colonel Bedford had the Bentley looked after by the Service Department up until 1939. Carefully stored during World War 2 and entrusted to H.R. Owen and S.J. Lawrence for fettling thereafter, the 4½ Litre had flashing direction indicators installed on each side of the scuttle by order of the Swiss authorities when it was licensed there for nine months in about 1947.

Side-lined by a faulty drive gear train to its magnetos and water pump, the Tourer was purchased from Colonel Bedford by the late Charles Philip Blackham Esq. as a non-runner on March 14th 1952 for £260. A talented engineer and keen motorist, Mr Blackham collected 'EMF 113' from Salfords Garage, Brighton Road, Redhill, Surrey and soon had it running again. Used for daily travel as well as rally work and driving tests, Chassis RC41 was subject to various performance modifications. Re-bored and fitted with Specialloid pistons by the Service Department at 45,000 miles in 1939, the original engine had its compression ratio increased to approximately 6.75:1. The pistons had their skirts trimmed and the flywheel was lightened. An uprated water pump was installed, and the ignition system converted to coil and magneto.


No stranger to high velocities, Mr Blackham sourced a pair of Lucas P100 headlights and Desmo auxiliary driving lights for the Bentley and affixed a plaque to its dashboard which reads: 'Speed Must Not Exceed 170mph'. He also rewired the 4½ Litre and crafted a bespoke switch plate for it which was featured in the Bentley Drivers' Club Review. The same publication ran a story on the Tourer in its April 1965 issue, Mr Blackham commenting: 'Continuous cruising speeds of 70, 75 and 80mph are used regularly on the motorways with much higher speeds maintained briefly on occasions . . . Handling on the road is superb, with complete freedom from roll, the whole car always feeling taut, but strong-arm techniques are needed at times when cornering fast on indifferent surfaces. This latter characteristic is to me one of the great joys of Vintage motoring . . . With a good power / weight ratio (weight is deceptively low at only 36cwt), immense torque at medium engine revs, and high-geared steering, even driving in busy towns can be a pleasure . . . As might be expected the engine is extremely lively in its response to the throttle and yet the car lacks nothing in tractability'.

Unhappy with the aesthetics of the hood Vanden Plas had designed, Mr Blackham devised his own frame that sat within the body when folded. He also shortened the gear / handbrake levers, lowered the radiator by three-quarters of an inch and fabricated a front valance panel. Importantly, however, he made no substantial changes to the essence of the car which his family christened 'Blob' on account of its 'blob, blob, blob' exhaust note when idling in London traffic! Actually resident in Stockport, Cheshire for most of Mr Blackham's tenure, the Bentley participated in The Daily Telegraph's 1969 Manchester to Blackpool Veteran and Vintage Car Run. MOT paperwork on file ranges from a Test Certificate issued by Joseph Cockshoot (Stockport) Ltd on 21st April 1962 through to an Inspection Report Pass granted on November 7th 1988. Dormant for the last thirty years, the 4½ Litre is now in need of extensive restoration. Dr Clare Hay inspected Chassis RC41 on Friday March 1st and a copy of her findings will be made available to interested parties upon request. Our own investigations revealed the number 'RC 41' stamped into the front axle, front chassis cross member (behind the radiator), D Type gearbox, steering box and rear axle nosepiece. The engine is correctly numbered as 'RC418E', while the rear axle casing bears the number 'FW2618' which relates to a 6½ Litre that (a) served as a showroom demonstrator and (b) was first registered to marque saviour and thrice Le Mans winner Capt. Woolf Barnato. The Vanden Plas coachwork still bears its correct plaques and the number '70' is clearly visible to one of the seat bases (the body number allocated to the car was 3470).

Human frailty means that it is now impossible to buy a W.O. Bentley from its original owner. The best one can hope for is to acquire one from its second keeper - or in this case his estate. Of the six RC Series 4½ Litre cars completed, Chassis RC41 is the only one to retain its original coachwork (the other five has been rebodied as 'Le Mans' style Tourers). As such, 'EMF 113' is utterly unique. We believe it to be a 'matching numbers' car and doubt that another 'garage find' W.O. Bentley of such rarity and importance will emerge during this, the marque's centenary year. An absolutely unrepeatable opportunity for Bentley aficionados everywhere and a car that surely deserves to grace the lawns of the world's finest concours events once restored to its former glory.

PLEASE NOTE: The late Charles Philip Blackham served with the Royal Air Force during World War Two as a member of 1667 and 550 Squadrons. A Flight Engineer and Pilot with the latter he flew Avro Lancaster bombers in a variety of high profile missions including the destruction of Hitler's Eagles Nest complex and Operation Manna.

PLEASE NOTE: Since the catalogue went to press, we have been informed that most of the original Vanden Plas coachwork from Chassis RC43 was fitted to Chassis UK3286 after World War Two. It seems that Chassis RC43 had been accident damaged beyond repair during 1938. When the Bentley Drivers' Club were consulted about the swap in 1969, they advised as follows: 'There is no point in not having the chassis number changed. You would be wrong in law not to do so and might run into difficulties with the Police or Insurers in the case of theft or an accident'. The car's then owner decided against informing the relevant authorities and unfortunately there are now two claimants to Chassis UK3286.

PLEASE NOTE: Dr Clare Hay, the preeminent authority on W.O. Bentleys, considers that two of the RC-Series 4½ Litre cars retain their original Vanden Plas coachwork. Her rationale is as follows: 'For Bentleys, the company regarded the chassis frame as a service replaceable item, so the identity is carried by the car as an entity rather than any particular component, even the chassis frame. So car RC43 was fitted with frame UK3286 after an accident, retaining the identity RC43. UK3286 was broken up. The other claimant has the steering column'.