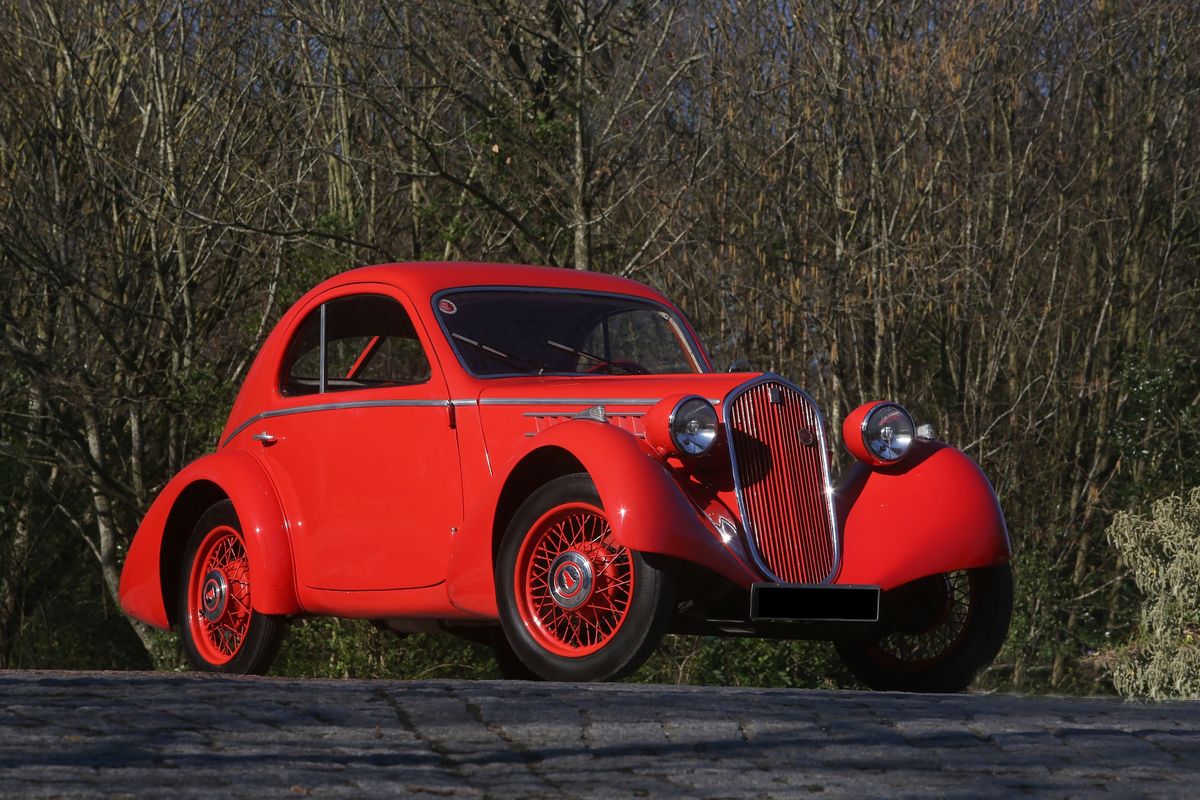 Exceptional in many ways, the car we are presenting here is - along with the Coppa d'Oro spider - the most desirable of the Balilla range. Prompted by an idea from the stylist Ghia, in 1933 a prototype was windtunnel-tested. This was the beginning of the application of aerodynamics to the motor car, with more fluid forms starting to be adopted. The resultant design innovated with the purity of its lines, and can be considered the industry's first ‘teardrop' body. Others would follow, some years later, beginning with Voisin, Darl'mat, Figoni and Castagna in 1936 and then - and above all - the Bugatti Atlantic in 1937, whose aerodynamics so marked the time that the design is considered the most beautiful in the world.

For Fiat the objective was simple and the design brief clear: what was needed was to build a closed competition model capable of doing well in the most important international events, not least that which was closest to the Italian heart, the Mille Miglia.
The 508 was an important car in Italy's motoring history. It was in effect the first modestly-sized Italian car and was a great commercial success, but above all it owed its enduring reputation to the fact that it was developed by some of the country's most respected engineers. Conceived in the workshops of Turin University and brought to production in Fiat's Lingotto factory (famous for its roof-top test track), the Mille Miglia was built on a 508 chassis by Fiat's own bodyshop. Made for only two years, production was limited, with fewer than a hundred built. Just four, including this example, remain in running order.

The Fiat soon made a name for itself in competition. This began with the 1936 Mille Miglia, in which one finished second in class and 14th overall at an average speed of more than 80km/h (50mph) in the hands of Alberto Comirato and his wife Lia Dumas. It should be pointed out that as well as its aerodynamic efficiency the car owed its good performance to an uprated 36bhp version of the Balilla's 995cc engine, fitted with a modified cylinder head and a different carburettor, and mated to a four-speed gearbox; hydraulic brakes added a further dash of modernity. It is amusing to relate that the current owner met the creator of the Balilla's engine during a rally in Italy. After a long conversation in the bar of Turin's Grand Hotel Ambasciatori, Bartholomo Nebbia wrote him a letter dated 29 July 1972 - included with the car's paperwork - in which he sings the praises of the engine and of the car's behaviour on winding mountain roads.

If Fiat capitalised on the car's performance by giving it the Mille Miglia name, more important for designers was how the bodywork marked such a rupture with the square-cut forms of the 1920s. Its avantgarde profile had a purity and a fluidity, a smoothness of line emphasised by the lack of bumpers, the rearward-slanted bonnet vents and the integrated rear numberplate behind its glass cover.

The two-piece rear window follows the curve of the body, whose shape is emphasised by a rib running from tail to roof. The finely sculpted solid walnut door cappings follow the ellipse of the windows, perfectly echoing the curved of the body.
The car presented here was bought in 1970 by its current owner, then in management at Fiat. President and founder of the Fiat club de France and a man of letters, he is also a keen gentleman-driver and has covered many tens of thousands of miles at the Fiat's wheel, in several European countries.

Twice restored, not without difficulty as a result of the body's wood framing, the car today wears an elegant patina and is in wonderful running order. Recently shown on our stand at Réromobile, the car attracted the admiration of visiting collectors. For our part, we have been agreeably surprised by how modern it feels on the road. The engine copes robustly with the Fiat's 630kg (12.4cwt), the gears are well spaced, and the brakes bite well. Even today a happy 90km/h (50mph) cruising speed holds no fears for the car.

Among sought-after and desirable pre-war Fiats this Balilla is even more desirable on account of its Aerodinamica coachwork.
Eligible naturally enough for the Mille Miglia and many other historic fixtures, it is also a choice item for any collection of exceptional cars. In the same hands for 49 years, accompanied by bills for all the work carried out, plus numerous notes by the owner and sundry photos, this is a car that represents an important page in the history of its maker. It is equally significant as arguably the initiator of the ‘teardrop' school of styling that was taken up with such enthusiasm by French coachbuilders - and also in Italy, Britain and the United States - during the 1930s and even after the war.