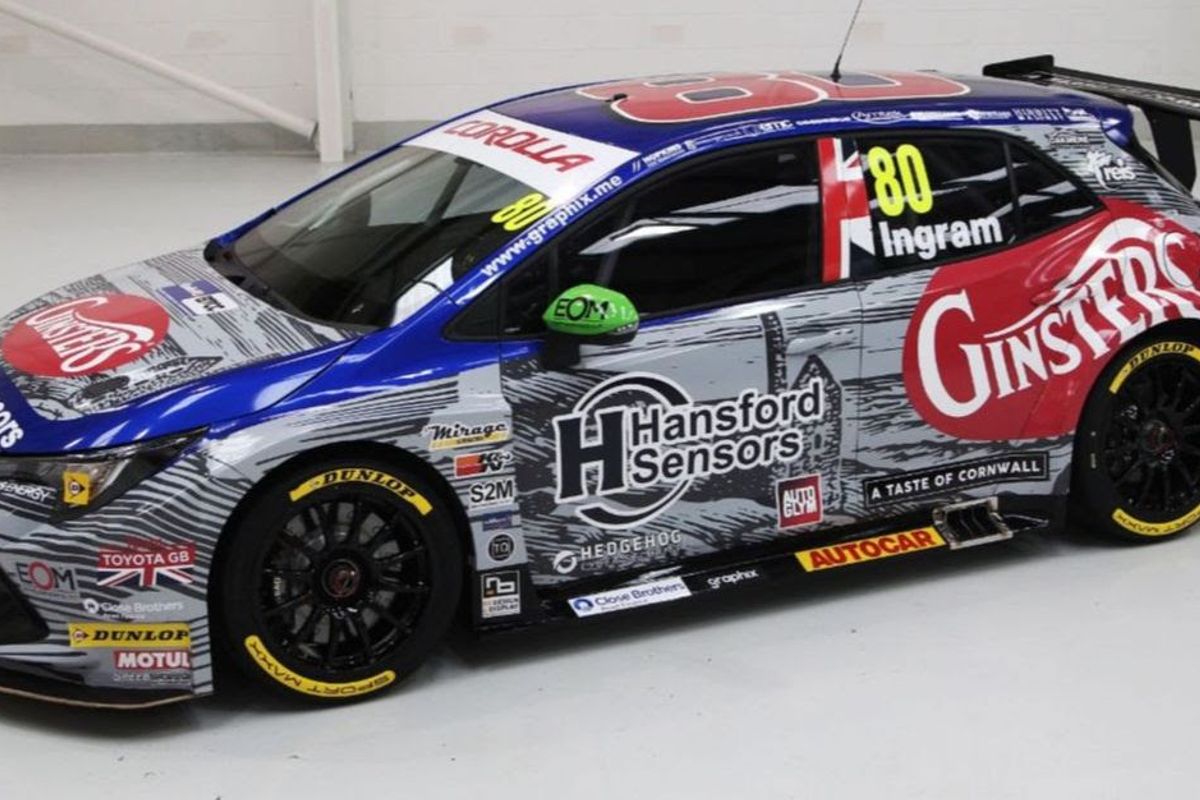 Team Toyota GB will race into the 2019 British Touring Car Championship with a new title partner and a striking livery adorning its ‘Built in Britain’ Corolla, after Tom Ingram and Speedworks Motorsport confirmed a major sponsorship deal with the nation’s favourite pasty-maker, Ginsters.

Speedworks – reigning two-time Independent Teams’ title-winner and the operating force behind Team Toyota GB’s first official BTCC Manufacturer entry in more than two decades – is one of the few true family-run outfits contesting the UK’s premier motor racing series. Those core family values struck a chord with Ginsters, itself still a family-run business – Samworth Brothers – with the Ginsters bakery to be found in Callington, Cornwall, home of the Cornish pasty.

To celebrate its 50th anniversary year of baking, the company is embarking upon a landmark tour of the UK, aiming – with the support of the freshly renamed Team Toyota GB with Ginsters – to leverage the BTCC’s wide geographic and demographic reach, showcasing its range of high-quality, baked pasties served hot to teams and fans.

Ginsters joins loyal returning partners Hansford Sensors, EOM Developments and Motul, recently-announced Autoglym and Close Brothers Asset Finance as well as several more yet-to-be-revealed sponsors in backing Ingram and the #80 Toyota – the car bearing the same number, incidentally, as the layers of puff pastry that encase every one of the Cornish brand’s pasties.

Sporting Ginsters’ distinctive colours on the side of his Corolla – with intricate wood-carved illustrations portraying unmistakeable Cornish scenes – 25-year-old Bucks-born racer Ingram is heading into the forthcoming campaign with a spring in his step and his tail in the air. Like Speedworks, he lifted the BTCC’s coveted Independents’ Trophy in 2017 and 2018. Twelve months on, he has the biggest prize in British motorsport firmly in his sights – the overall Drivers’ crown.

The 2019 BTCC season will begin at Brands Hatch’s Indy Circuit in Kent on 6/7 April, with all of the high-speed, high-octane, wheel-to-wheel action broadcast live and in high-definition on ITV4.

“Over the winter, we had the exciting opportunity to build something awesome from the ground up – planning, designing and evaluating every tiny detail with the aim of creating a car that simply has no weakness, irrespective of weather and track conditions, ballast or tyre choice. Ginsters embrace that same minute attention-to-detail and dedication to perfectionism every single day, which makes them a very natural partner and we are thrilled to have them on-board.

“We have been truly blown away learning about the engineering and quality control that go into every element of every flavour of every Ginsters product. Their ingredients, processes and suppliers are all the very best; like us, they leave nothing to chance and if something isn’t quite right or is a tenth off, then it is back to the drawing board until it is right.

“When we think of the development that went into our old Toyota Avensis – still making improvements right up to its last race – and the development that has already gone into the Corolla, we are completely in awe of what Ginsters achieve on such a large scale across so many products, and we cannot wait to tell everyone all about it!”

“Alongside Toyota’s commitment to building the best cars in Britain, I genuinely don’t believe there is a team with stronger foundations in UK motorsport than Speedworks – and in Ginsters, it’s incredible to find another brand that is as completely focussed on simply ‘doing things properly’ as we are.

“Like Speedworks, Ginsters are still a very down-to-earth company with honesty, integrity and family roots at the heart of everything they do – not to mention proud heritage. The family team ethos has been a huge part of how we have raced over the years and is certainly something that won’t be changing anytime soon, so to align with a brand that just ‘gets it’ is amazing.

“It’s awesome how many synergies and crossovers there are. We completely echo each other’s processes, values and work ethic – and I think that comes across, too, in the livery on our new Corolla. Ginsters are an iconic Cornish company, and we’re keen to bring as much of Cornwall as we can to the BTCC – it’s a beautiful part of the world, and we have created a beautiful design to reflect that. I’m looking forward to showing it off everywhere we go.”

“We’re delighted to be bringing a Taste of Cornwall to BTCC fans. We pride ourselves on our authenticity, and therefore it was essential that we partner with a team that shares our core values. In Tom and Speedworks, we have found our home. They are down-to-earth, honest, committed to their craft and determined to be the best they can be. Partnering one family business with another is such a natural fit.

“The expertise and dedication that the Toyota team has built into designing the new Corolla with Tom and Speedworks – using the height of technology and engineering – perfectly aligns with the skills we employ in crafting distinctive recipes to then bring to the nation on such a large scale.

“We’ve been baking Cornish pasties in Callington, Cornwall for 50 years. We only use 100% British-farmed meat, we never add artificial ingredients or preservatives and our products have an unmistakeable, distinctive flavour. We can’t wait to be among the action, serving up a trackside taste of Cornwall to fans of the BTCC this season. We are proud to race as part of a team that unfailingly pushes itself to the limit and strives to be the best.”