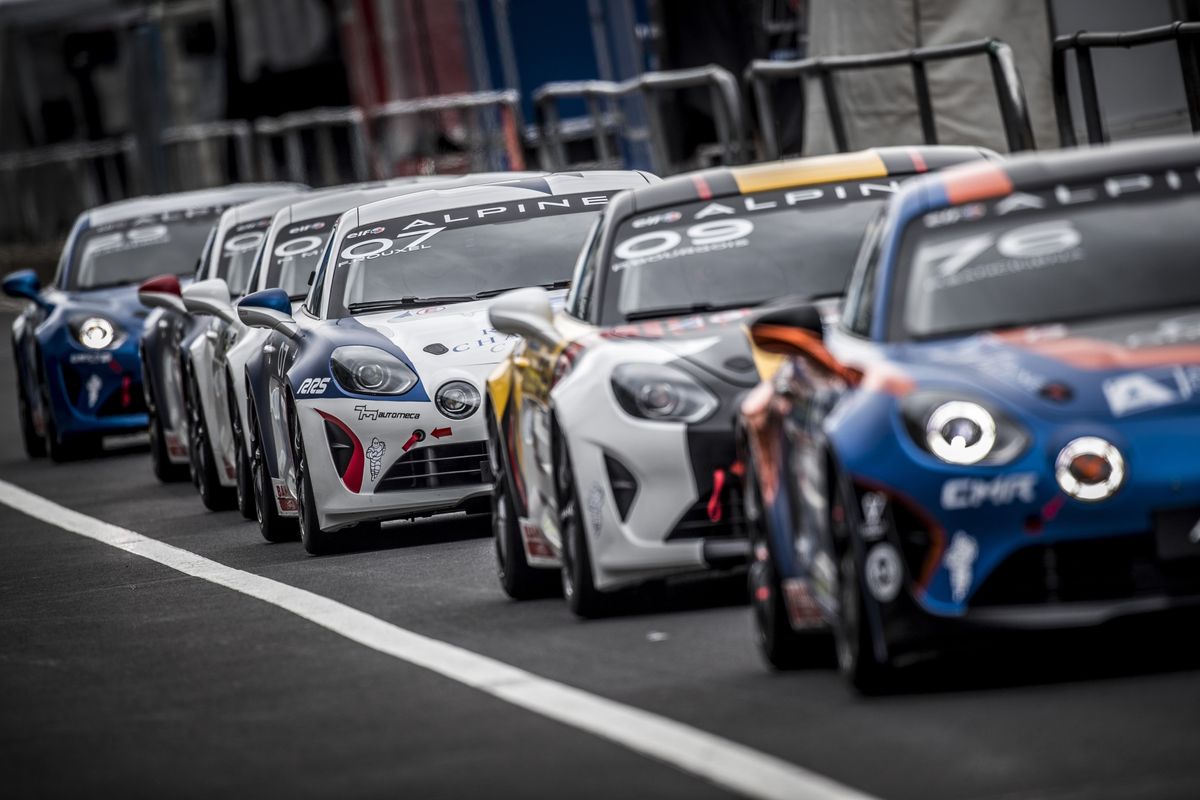 Following a successful maiden campaign, the Alpine Elf Europa Cup will begin season two with two days of testing at Circuit Paul Armagnac de Nogaro. Between well-known faces and ambitious newcomers, the race to follow in the footsteps of Pierre Sancinéna is about to start with a larger and quality field!
20 drivers will be present to get acclimated to their Alpine A110 Cups and see where they stand in this important pre-season test on the very same track that will host the opening round of the year.

ONE STEP AHEAD
Many-time champion in touring car series, Nicolas Milan (Milan Compétition) came within a whisker of the title in his first full season in a rear-wheel drive car.

While the driver-preparer logically figures among the favourites, he will have to keep a close eye on both Vincent Beltoise (Racing Technology) and Gaël Castelli (CMR). They each scored two wins last year, but this year they want more!

To reach their respective objectives, both have made the gamble to switch teams. Gaël Castelli will take over from Pierre Sancinéna and… Vincent Beltoise at CMR, as the latter joins the squad of Sylvain Noël, who finished third in 2018!

The Nogaro collective tests should therefore offer them a first opportunity to see how they fare against the competition.

SHAKE UP THE ORDER
While this trio seems to have an advantage on paper, the other contenders hope to hold their own if not more.

Victorious at Dijon, Marc Guillot (Milan Compétition) will be ready to seize upon any opportunity to show his speed, as will three-time podium finisher last year, Julien Neveu (Autosport GP).

Laurent Hurgon (Autosport GP) finished second in the Gentleman category in his competition return and he is back with definite ambitions, but he will have his work cut out to take that one extra step on the season-ending podium.

However, the deck could be well shuffled this year with the arrival in the Gentleman category of Thomas Padovani (Milan Compétition) and Mathieu Blaise (Racing Technology), who were regulars in the top ten. Veteran Denis Gibaud (Milan Compétition) who raced in Barcelona at the end of the 2018 season will also be in the mix, as Grégory Romano (CMR), who will be back later this year.

NEWCOMERS FULL OF AMBITION
Five new drivers will make their official debut in the Alpine Elf Europa Car at the Nogaro tests.

2009 and 2017 French FFSA GT Champion, Mike Parisy (CMR) will aim for another title to add to his impressive collection as he will have the n°64 Alpine A110 Cup all to himself!

He will not be the only newcomer to watch out for in the Charles-Antoine Bourachot run team as former Swiss single-seater hopeful, Yann Zimmer (CMR) also returns to action.

There will also be some new blood in the Junior division with the arrival of Mateo Herrero and Antoine Miquel at Milan Compétition. The former French F4 championship competitor and winner of the 420R category in the Caterham Cup will be out to dethrone Jean-Baptiste Mela and earn a test session with the official Signatech Alpine Matmut LMP2 team.

Jean-Baptiste Mela (Autosport GP), who won the Junior division last year in what was his first season in a car, won’t be at Nogaro, but he will be back to defend his title against the new wave of drivers, which will include Alexandre Gadois (Autosport GP) already confirmed for three rounds (Spa, Silverstone and Barcelona), and 2018 Clio Cup France Junior category champion, Corentin Tierce (Tierce Racing), who will be testing before going on the grid at Spa and Circuit Paul Ricard.

On Tuesday and Wednesday, the drivers will have four sessions of four hours to conduct their preparations for the first meeting of the season at Nogaro.