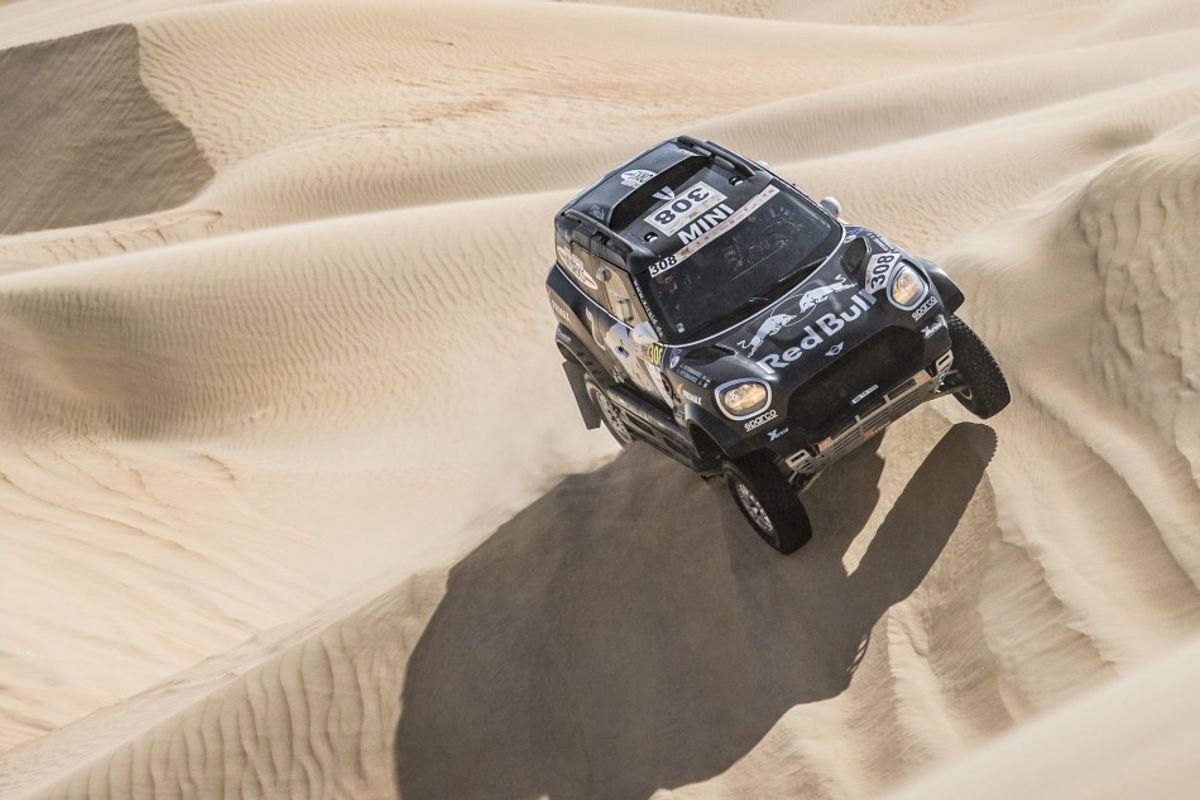 Yazeed Al Rajhi bounced back in the second leg of the Abu Dhabi Desert Challenge to take the stage win while overnight leader Cyril Despres had a disastrous day stuck in the dunes.

Stéphane and Andrea Peterhansel have taken control of the Abu Dhabi Desert Challenge leaderboard, overturning a near eight-minute overnight deficit into a two minute 26 second lead after Monday’s second selective section on the second round of the FIA World Cup for Cross Country Rallies. Bernhard Ten Brinke/Tom Colsoul have maintained second amid an incredibly close battle between the leading trio that sees them just 32 seconds ahead of Khalid Al Qassimi and Xavier Panseri after nearly 500 kilometres of competition.

Cyril Despres, overnight leader, had a disastrous time stuck in the dunes with a damaged jack; he lost more than three hours to the front-runners and has dropped to 11th overall. Yazeed Al Rajhi set a blistering pace to take the stage win but the Saudi Arabian driver amassed massive time penalties yesterday with a transmission problem and is much further down the leaderboard, undoubtedly now just chasing stage wins with the chance of a top overall placing gone. “It was a great day and it’s a very good feeling to finish first after an unlucky day yesterday,” he said at the stage finish.

Monday’s 222.80 kilometre section took the crews back into the vast desert land of the UAE, the route running east along the Saudi Arabian border for much of the second half of the section. High winds and sandstorms once again added to the challenge and with fine sand also being whipped up onto more compacted sand dunes from rain in previous days, conditions were even more unpredictable.

After countless victories on bikes and in cars, Stéphane Peterhansel could yet add the accolade of winning an FIA World Cup Cross Country Rally with his wife to his long list of career triumphs. The duo, who started third, powered into the lead in their MINI JCW Rally car and take a small but significant advantage into the third of five legs. “We stayed quiet as we saw lots of cars getting stuck,” said the six-time Abu Dhabi Desert Challenge winner. “The speed was not too fast, but it was good all through the stage, and leading the cars for the stage was a new experience for my wife as there were no tracks to follow.”

Bernhard Ten Brinke and Tom Colsoul caught overnight leader Cyril Despres shortly after the start and then ran with Peterhansel before getting stuck in the sand for a couple of minutes. They followed stage winner Yazeed Al Rajhi through the closing kilometres but then had to measure their pace after a heavy landing. “It was a very tough stage,” said the Toyota driver. “Towards the end we had to take it slowly because my seat got dislodged after a really heavy impact. Otherwise all okay.”

The UAE’s leading driver and winner of the 2017 Desert Challenge, Khalid Al Qassimi, partnered by Frenchman Xavier Panseri, has powered from sixth to third and is a mere 32 seconds further adrift in his Peugeot 3008 DKR. He does however have a cushion to fourth-placed Jakub Przygonski who is nearly six minutes behind. In contrast to yesterday, when the Pole’s stage was saved by a tow from Martin Prokop, the tables were turned today when Przygonski stopped to help the Czech driver twice, but then suffered his own problems in the process. “It was not so bad but very windy, visibility was bad and the sand was moving a lot,” said the Polish reigning champion. Co-driver Timo Gottschalk added: “We stopped to help Martin [Prokop} who was stuck and when I opened the door, the wind virtually smashed it off its hinges. Then it flew off.” As a consequence, the crew had to complete the stage with dust swirling round inside the cockpit.

The rivals continue to be evenly matched, however, with Prokop just over 90 seconds behind, despite his problems. “We caught the lead car in the first half and didn’t want to pass and then Jakub stopped to help us when we got stuck, so thanks to him,” said the exhausted Czech driver at the end of the stage. “The second half was a bit of a disaster; we struggled a bit and also had a fuel pressure problem which forced us to stop for a few minutes. Not the best stage.”

Vladimir Vasilyev and Konstantin Zhiltsov, two-time winners of the event, had a better day and have climbed from 10th to sixth, second fastest through the section aiding their challenge. “It was difficult, but better than yesterday,” said the Russian. “The temperature in the car was incredible though; there might be lots of wind but it doesn’t change the heat in the car!”

Aron Domzala, in a third Toyota Hilux, finished the stage eighth to maintain his seventh position, despite having to stop with an electrical problem. The Pole does however continue to suffer ‘sea’ sickness, such is the feeling as the crews surf some of the world’s biggest and relentless dunes.

T3 machinery continues to hold positions in the top 10 and Casey Currie leads the category by a mere nine seconds over Brazilian Reinaldo Varela, both in Can Am Mavericks. “It was a really great day where we led for most of the way before dropping behind Varela for a short while,” said Currie about his battle with the T3 winner on the previous round in Qatar. “He was then too slow and I had to pass him; honestly I’m surprised that I come out here and compete with him at this level.” Tenth overall is held by Essa Al Dossery in a Nissan Navara.

Alexander Baranenko has dropped to second in T2 behind Mohammed Al Meer, while Ibrahim Al Muhana continues his lonely run in T4 in a Mercedes Unimog Truck.