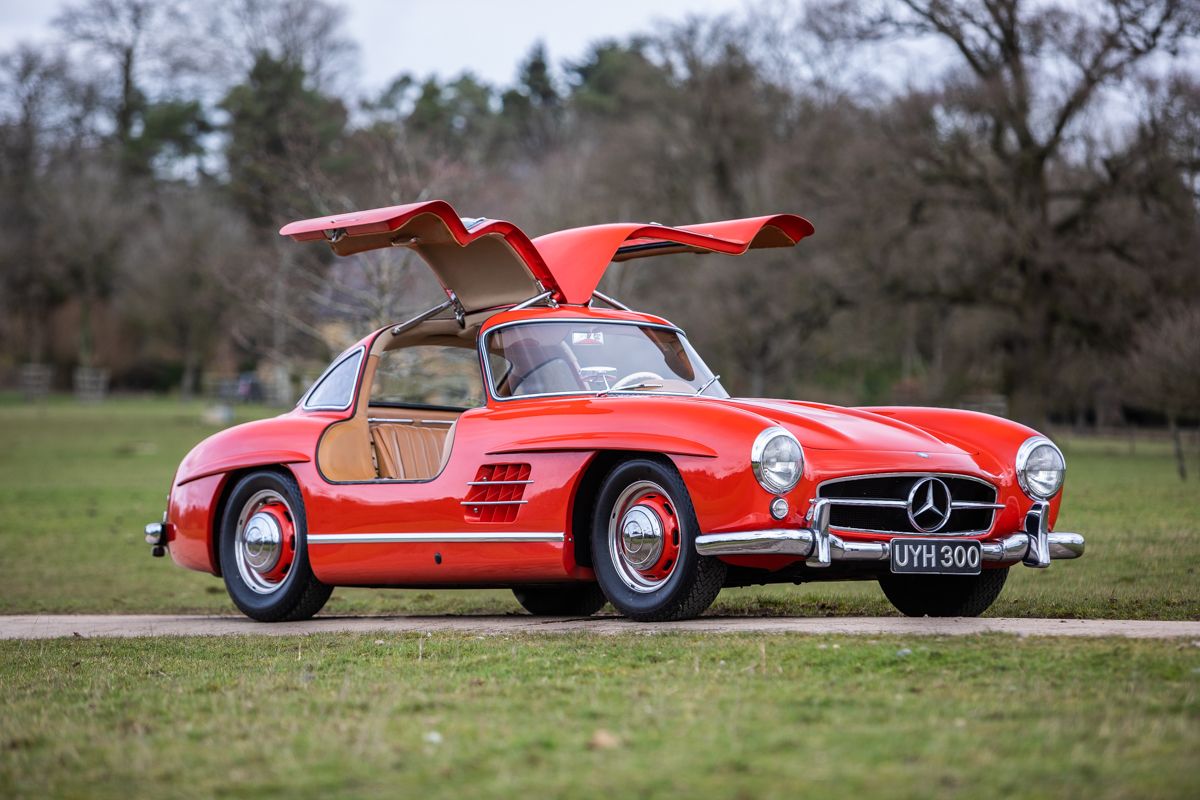 The 300SL Gullwing is an iconic Mercedes-Benz coupe that was first produced in 1954. Only 1,400 cars were ever made and early cars such as this one, are particularly desirable. In 1999 the 300SL Gullwing was voted "Sports car of the century".

Nick Whale, Managing Director of Silverstone Auctions commented “We are privileged to offer this car fresh to market from the same private ownership as the 300SL Roadster that we sold at the Silverstone Classic in 2018.
This car comes with an impressive history file and with a unique first UK owner being the late Peter Warr, who was team manager for the Lotus formula 1 team.
He imported the car from Arizona in 1989 and subsequently enjoyed the car until it was purchased by our vendor in August 1993.”
What is really special about this Gullwing is its an early car and features the highly desirable full 'belly pans'.”

When supplied new on 27th December 1954 to Hoffmans of New York, the car was originally finished in Mercedes racing silver. It is now presented in Fire Engine Red as it was when Peter Warr imported the car in 1989.

It has also been fitted with a sports camshaft upgrade and, more recently, electronic power steering which can be removed if required.

The comprehensive history file shows the thorough and diligent maintenance of the car by well-known 300SL Specialists, including John Surtees Engineering, marque expert Ron Waghorn, marque expert Tommy Johnston and more latterly Neil Corns of Omega Motorsport. The plethora of parts invoices are from Keinle, HK Engineering and Classic Mercedes UK but, most important of all, the injection pump was completely overhauled and rebuilt by HK Engineering in Germany just 2 years ago. Both the gearbox and brakes have also been recently overhauled, including both the brake drums and master cylinders

The car has benefitted from regular use and has been on many European motor tours to exotic places such as Spain, Portugal, Italy, France and Monaco, as well as competing on the Ecurie Ecosse Scottish Tours no less than 12 times!

Nick Whale continued ”It has clearly been loved and cherished by our enthusiastic vendor who is now ready to let the car enjoy its next chapter.”

The Silverstone Classic Auction takes place on Saturday 27th and Sunday 28th July 2019 offering an exclusive selection of classic cars, sports cars and supercars, including automobilia and luxury watches. The lots can be previewed on the 25th July 2019 from 13.30 to 18.30 and on the 26th July from 09.00 to 18.00