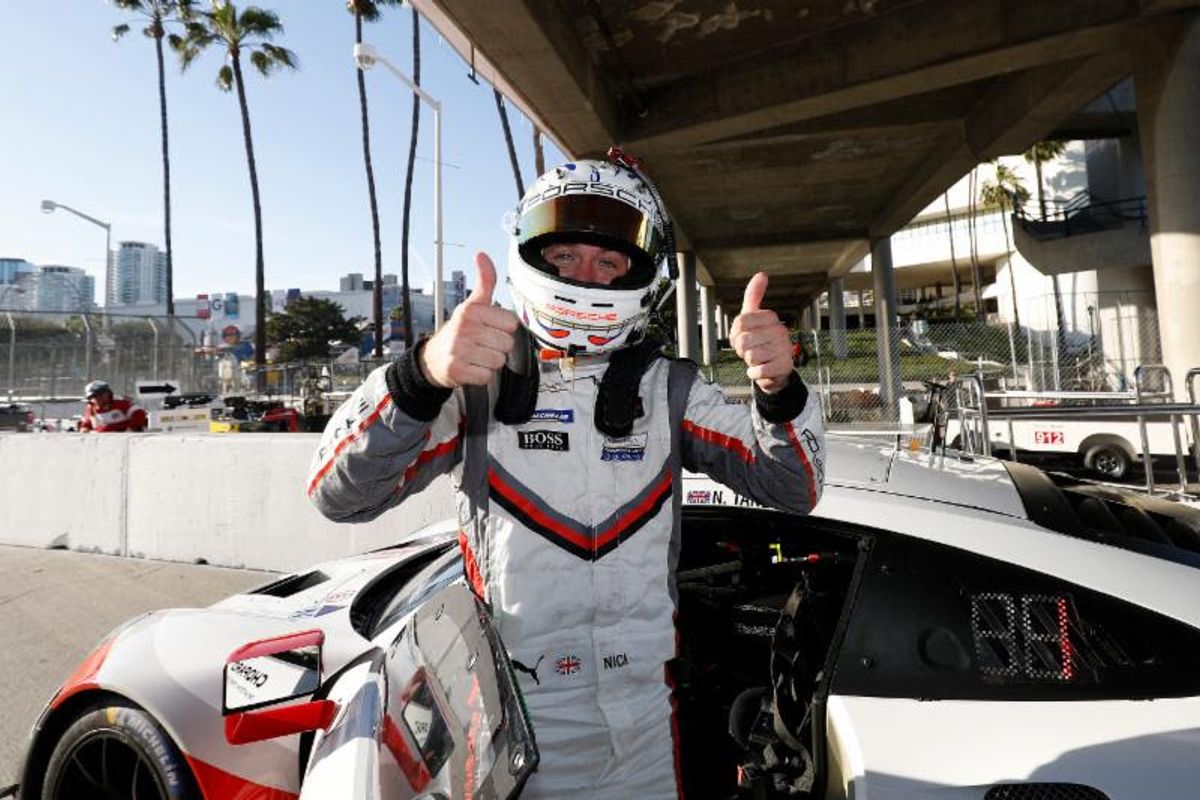 The third race of the 2019 IMSA WeatherTech SportsCar Championship takes place Saturday and for the GT Le Mans (GTLM) class, it’ll be the third consecutive race led to green by the No. 911 Porsche GT Team Porsche 911 RSR.

The car co-driven by Nick Tandy and Patrick Pilet has scored all three pole positions in 2019, with the former getting the job done on Friday ahead of the 100-minute BUBBA burger Sports Car Grand Prix.

It’s the second pole for Tandy this year after posting the fastest lap at the Rolex 24 at Daytona in January, while Pilet earned the pole at the Mobil 1 Twelve Hours of Sebring Presented by Advance Auto Parts last month.
Tandy’s time of one minute, 16.313 seconds (92.838 mph) was .556 seconds quicker than the previous track record set in 2018 by Joey Hand in the No. 66 Ford Chip Ganassi Racing Ford GT.

“The car was really good,” said Tandy. “We made some changes after the practice session. It really worked. I’m really surprised at the lap time we were able to do. It’s a strange day here today. You have the two practice sessions and straight into the qualifying. You don’t have a lot of time to fine tune and work with your driving and things like that. Obviously, really happy. It’s the best place to start, being the shortest race of the year, track position makes a big difference.”

It will be an all-Porsche front row, with the No. 912 Porsche 911 RSR of Laurens Vanthoor qualifying on the outside of the front row with a time of 1:16.377. Vanthoor will co-drive with Earl Bamber.

The results come hardly as a shock, as the No. 911 Porsche led first practice Friday morning and the No. 912 topping the afternoon practice session just prior to qualifying.

Starting fourth after a slightly tumultuous qualifying effort will be Sebastien Bourdais, who is substituting for the ill Joey Hand in the No. 66 Ford Chip Ganassi Racing Ford GT alongside Dirk Mueller. Bourdais returned to pit lane before recording his first qualifying lap and parked too close behind the eventual pole-winning No. 7 Acura Team Penske Acura DPi in the pit box right in front of the No. 66.

There was no room for Bourdais to escape without having times disqualified for reversing or the team touching the car. Rather, Acura Team Penske was able to drop its DPi from the jacks, push the car forward and allow Bourdais to release.
﻿
The BUBBA burger Sports Car Grand Prix at Long Beach will be televised live on NBCSN beginning at 5 p.m. ET, with IMSA Radio also covering all of the action live on IMSA.com, RadioLeMans.com and SiriusXM Radio Channel 202 (Internet 972). It can also be streamed on NBCSports.com and the NBC Sports App in the United States.