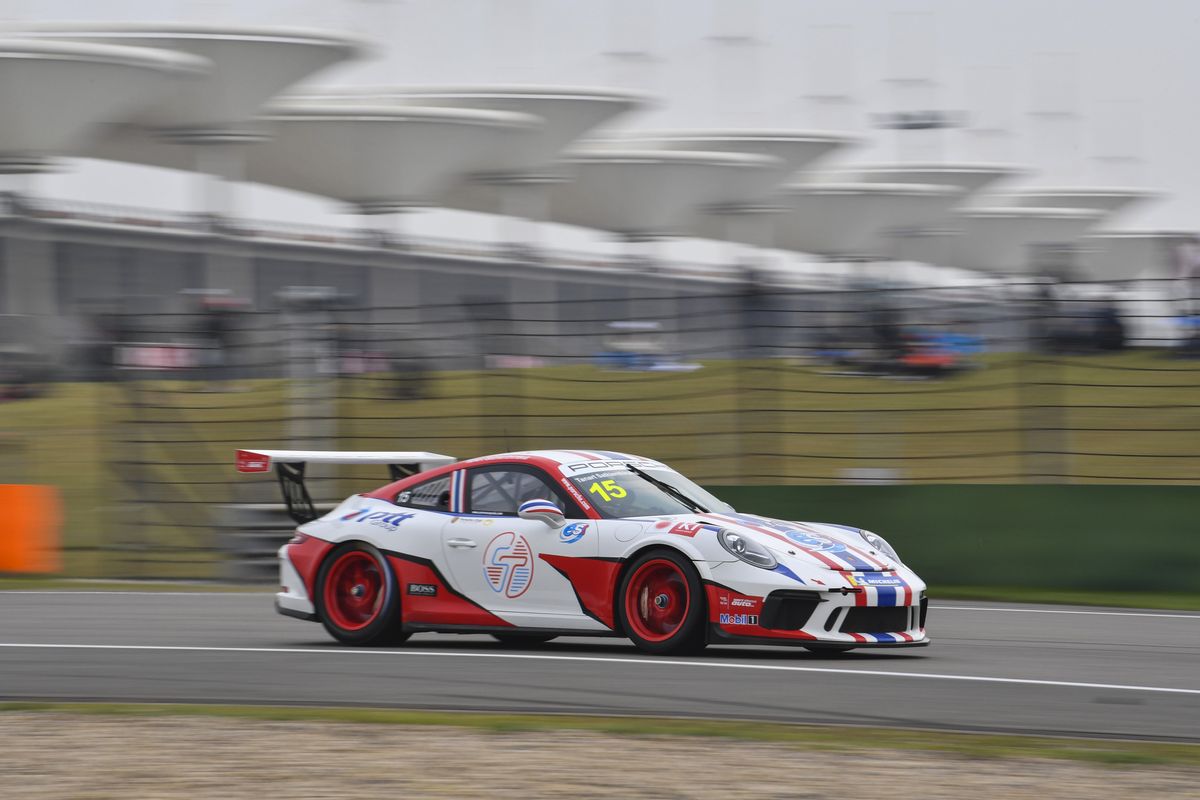 Come the race on Sunday morning, Hamprecht put up a great fight for the third place. The German driver had a strong getaway but he lost a position with a contact with an opponent in Turn 2. After safety car period, with less than five laps to go, he was a man on a mission, landing a podium position with an impressive manoeuvre in the penultimate corner of the last lap. Driving on the edge of control paid dividends for Hamprecht as he set the fastest lap of the day, scoring one extra point.

Seventh on the road at the end was the #15 Bunjong Motorsport Porsche of Sathienthirakul. After a slow start the Thai car gradually climbed the order during the race, collecting important points nonetheless.

Bao Jinlong lost two positions on the start, but the Zheng Tong Auto driver ran a really strong second half of the 12-lap race and was able to battle his way up to a Pro/Am class podium position at the flag, rounding off the overall top-10.

Yuan Bo, who received a late call to drive Absolute Racing car this weekend, was forced to retire on lap eleven with a puncture.

Suzuka International Racing Course in Japan will host the next two races of the Porsche Carrera Cup Asia season, on 25th and 26th of May.

Tanart Sathienthirakul (#15 Bunjong Motorsports): "For me this weekend was a bit difficult, jumping from the GT3-R car to the Cup car. I struggled a bit more than Philip. Next time in Suzuka we will have one extra test day and I think that will help me a lot. For sure I will find a way to improve. Hopefully we will come back stronger next time."

Bao Jinlong (#55 Zheng Tong Auto): "Overall today's race was good. In the beginning I cut a corner and went over the kerb. After this I felt the car’s left front had some kid of problem, but I was very close to the Pro-Am class top-3 and I kept pushing. In the last lap I found a chance to overtake in the last corner. I went for it and I got third. We want to push on from this over the next couple of races and keep working from here."

Yuan Bo (#88 Absolute Racing): "It was good to be back to Porsche Carrera Cup Asia paddock this weekend at Shanghai. I really enjoyed the whole weekend. I will put everything we've learned here into future races."

Philip Hamprecht (#99 Team StarChase): "Overall the weekend has been quite positive. It was not my best qualifying ever, but the race went very good. Perhaps it was my best start in the Carrera Cup car, but an unfortunate contact with another driver made me lose positions. I closed the gap between me and the driver in front of me. Eventually Chris did a mistake and I overtook him to take P3. Definitely we had the quickest car out there. With solid points on the board we can now look forward to Japan in a couple of weeks and hopefully take another step forward."

Fabien Fior (Team Director): "Of course we would have liked to have started the season with a win. We came into this weekend knowing the pace was there but unfortunately three of our cars lost positions in the first lap and at this level it is not easy to get those lost positions back. Still, it is always good to start a season with two cars in the podium and we can leave Shanghai feeling positive."