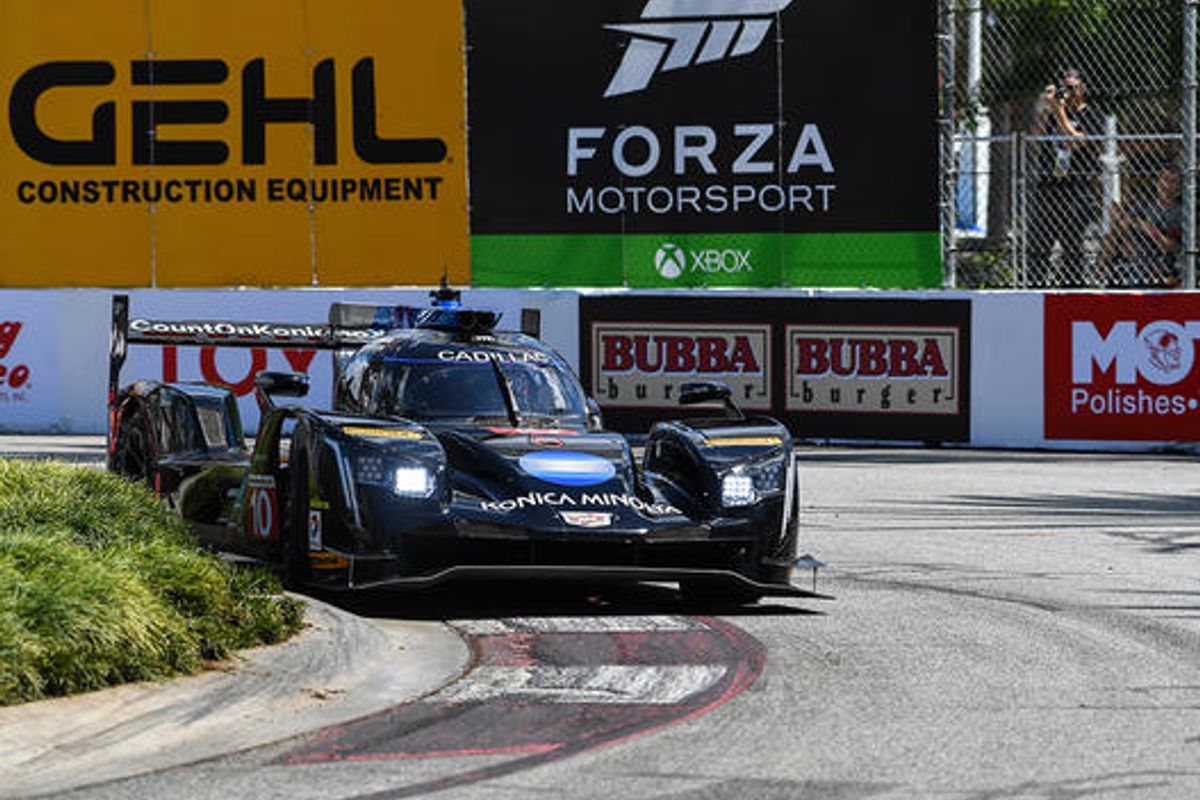 With a premium on track position in Saturday’s IMSA WeatherTech SportsCar Championship BUBBA burger Sports Car Grand Prix at Long Beach, the No. 5 Mustang Sampling crew opted to bring Filipe Albuquerque into the pits five minutes ahead of the other Daytona Prototype international (DPi) leaders. The decision paid dividends, as Albuquerque vaulted to the lead once the final round of stops was completed with between 35 and 40 minutes remaining in the 100-minute race.

Albuquerque had his mirrors full of Ricky Taylor in the No. 7 Acura Team Penske ARX-05 DPi throughout the final 30 minutes of the race. As the laps wound down, Taylor – a three-time Long Beach winner – got right under Albuquerque’s rear wing a couple of times, especially within the last 15 minutes of the race.

Albuquerque’s Cadillac was strong when it needed to be strong, though, and he also had some good luck with GT Le Mans (GTLM) traffic over the closing laps, which gave him just enough breathing room to get away. He crossed the finish line 0.740 seconds ahead of Taylor to score the second consecutive Long Beach victory for himself and co-driver Joao Barbosa.

“When the Penskes came back there at the end, the (No.) 7 car changed the rear tires and we didn’t,” Albuquerque said. “So, the last few laps there my rear end was all over the place and I couldn’t do anything about it. There were a few times I thought I was clipping the wall with the rear because of the oversteer. He was just waiting for me to make a mistake; it was a bit of mind games.

“He was a little bit quicker, but not enough to pass me in clear air. It’s not the type of race that I would like to do, because I want to be in full control. But a win is a win, and where we came from the beginning of the race and where we finished. I think that’s the beauty about the IMSA races, anything can change at any moment, a crash, fuel, anything can change.”

“Unbelievable results for us again, after the win last year,” Barbosa said. “I definitely didn’t have the best start of the race, it’s very difficult to overtake and I just got caught in the wrong spot at the wrong time in of the restart.

“The Mazda and the Acura got together outside of Turn 1. They hit the wall. I thought about going around the outside to overtake those guys. They kept going and I got stuck on the outside and had no place to go. I tried to gather my thoughts, and to keep calm and not compromise any results and give him a good car.”

Taylor’s No. 7 co-driver Helio Castroneves started the race from the pole position and took the lead at the drop of the green flag. However, he lost two positions after inadvertently pressing the car’s pit-lane speed limiter. Nevertheless, the team battled back for its second podium in three races this season and made up valuable ground in the DPi championship battle as other title contenders encountered trouble.

With three of 10 races now in the books, Felipe Nasr and Pipo Derani have a scant, two-point lead over Castroneves and Taylor, 92-90. Nasr took the lead from Castroneves early on in the No. 31 Whelen Engineering Cadillac DPi-V.R and held it through the pit stop when he turned the car over to Derani, but the car lost a tire shortly thereafter, necessitating an extra stop. They battled back to finish sixth.

Juan Pablo Montoya and Dane Cameron made it two Acuras on the podium, taking third in the No. 6 ARX-05 DPi. It was the team’s first double podium since the No. 6 squad finished second ahead of the No. 7 in third at Detroit last year.

Oliver Jarvis and Tristan Nunez finished a season-best fourth in the No. 77 Mazda Team Joest RT-24P DPi, followed by Simon Trummer and Stephen Simpson, who finished fifth in the No. 84 JDC-Miller Motorsports Cadillac DPi-V.R.