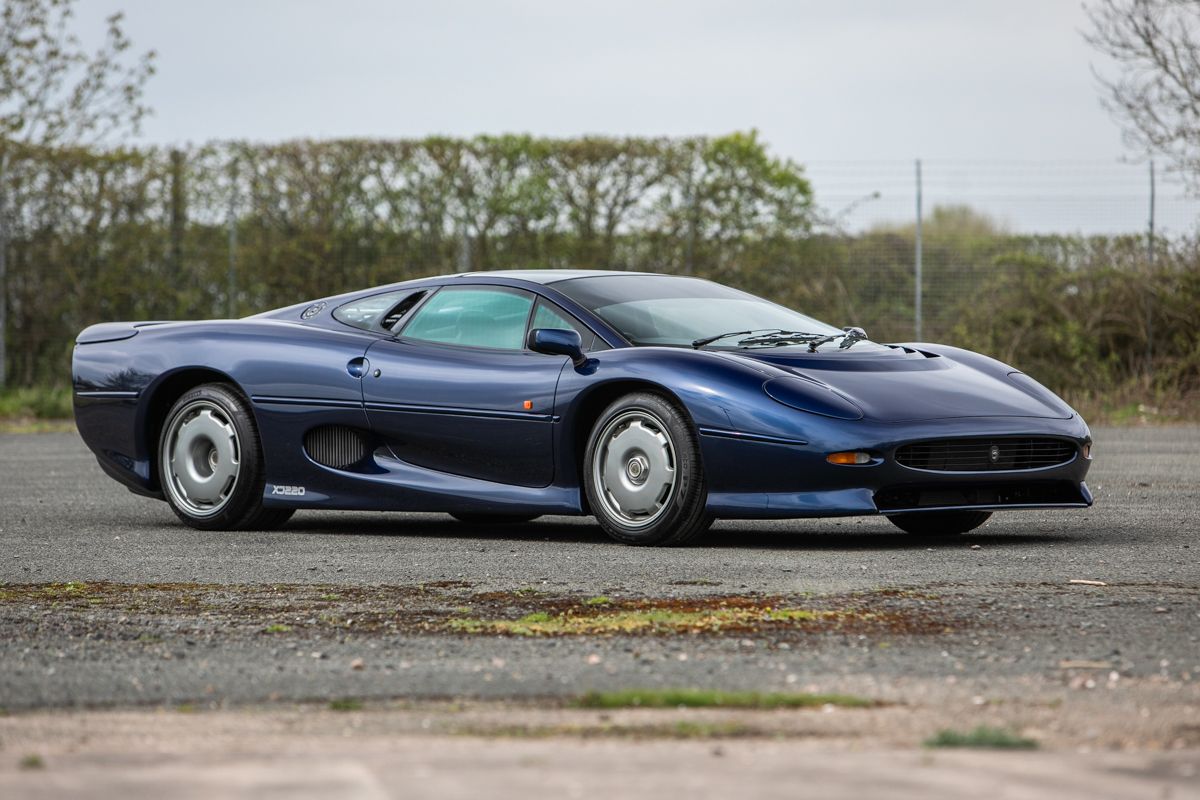 Heythrop Park in Oxfordshire will be hosting the Silverstone Auctions May sale of British Marques and Classic cars on the 11th May 2019, bringing together some very high quality and exclusive lots.

In association with the Jaguar Enthusiasts’ Club, a fabulous selection of Jaguars are being offered including two XJ220s, eight E-Types, XK120s and a 150 with interesting history. For the more modern enthusiast there are XJS’ and XKRs.

Silverstone Auctions are very excited to be offering not one but two XJ220 supercars, one in left hand drive with 20,500 km and the other right hand drive with just 700 miles. This car was once the fastest production car in the world, with the record set by Martin Brundle in 1992 at the Nardo test track.

The left hand drive 1997 XJ220 in Spa Silver with 20,500km has recently had £50,000 worth of expenditure lavished on it by Jaguar Classic Works and comes with the registration “220 XXK” and with all details of the works carried out in car’s history file. This car is now in exceptional condition and ready to be enjoyed by its new owner. Estimated at £300,000 to £350,000.
If a left hand drive XJ220 doesnt suit, well you can have a 1995 right hand drive version with just 700miles in Le Mans Blue. This car was recently discovered in a private collection in Malaysia and brought back to the UK where it underwent £25,000 worth of work by XJ220 model experts Don Law in December 2015. Estimated at £325,000 to £375,000.
Two highly collectable cars which to date are still the fastest cars produced by Jaguar. A great opportunity to acquire one of the most significant supercars of their era.

Other Jaguars in the auction include E-Types which have always been considered one of the most desirable cars and Silverstone Auctions are offering a variety of specifications including this remarkably pretty 1973 V12 Roadster Series 3 in manual. The car has been in the same ownership for the last 22 years and underwent a restoration in 2000, taking four years by respected firm Classic Motor Cars (CMC) in Bridgenorth. At the same time as the restoration the clutch and brakes were upgraded. Registered as FRW 300L in Coventry, the Heritage Certificate states it was a Jaguar Cars Ltd press car. Prior to auction this car will be MOT tested and is estimated at £80,000 to £100,000.

The British Marques sale also includes a remarkable 47,000 mile, two owner, 1965 E-Type Series 1 FHC. What is even more remarkable is the car still retains its original paint. This is a US delivered, left hand drive car, which had a replacement interior whilst it was in the United States finished fantastically to its original specification. A true time warp and estimated at £40,000 to £50,000.

RBN 376 is a very interesting XK150. If you like doing some competition then this XK150S with a 3.8L engine could be the car. It started life as Fixed Head Coupe in Pearl Grey, then underwent a full restoration in 1990/91 when it was converted to a Drop Head Coupe at a cost of £58,000. In 2000 it was upgraded to rally spec for competition at a cost of £60,000, followed by a further upgrade and another £58,000 in 2005/6 with a competition engine. In 2008 the current vendor purchased the car and has since had it fastidiously maintained by Pearsons Engineering. This is a striking, sporty Jaguar and looks fantastic in Red, with an amazing history file, estimated at £120,000 to £150,000 you will not be able to walk by this amazing car.

If something a bit more modern is for you a 1994 Jaguar XJS Convertible could be the car. Presented in Artic Blue and with just 14,700 miles indicated and three former keepers, XJS’ of this quality are becoming quite desirable in this market. The second owner had the car for 21 years before selling it to the current vendor and at an estimated £20,000 to £25,000 this could be a fantastic example to own.

The sale day will start with Automobilia and watches, with some of the highlights for Jaguar enthusiasts being an original XK150 painting by Tony Upson estimated at £300 to £400, some original E-Type handbooks estimated at £150 to £200, a cherished number plate, JA66 UAA, at £600 to £700 and an extremely rare cast brass leaping cat mascot from 1930 which is one of the five original prototypes and the actual mascot accepted by William Lyons estimated at £10,000 to £15,000.

Arwel Richards, Auction Manager for the Heythrop sale commented "The British Marques and Heythrop sale have some exceptional cars being offered and we are very excited to have the two Jaguar XJ220s consigned to us”.

“Included in the British Marques sale we also have some fine items of automobilia and some very interesting items for Jaguar enthusiasts including a very rare brass leaping cat mascot.”

“We are looking forward to our one day May sale at Heythrop and anticipate some healthy bidding on some wonderful cars and automobilia.”

The Heythrop and British Marques sale is a one day sale with viewing of the lots on Friday 10th May from 09:00 until 17:00 and on the morning of Saturday 11th May 2019.
The auction will take place on the 11th May starting with the Automobilia at 10:30 followed by the Heythrop Classic Car sale at 12:30 and finally the British Marques at 14:00.