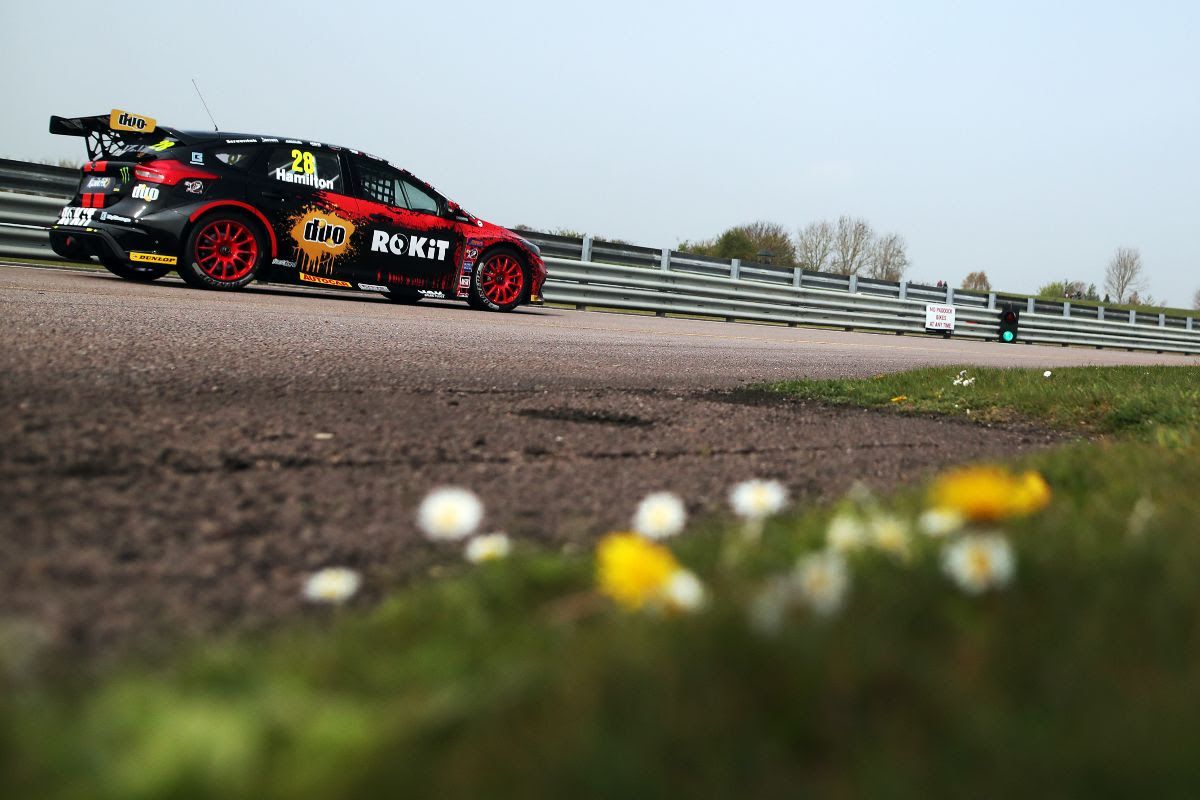 ‘Nowhere in the world like Thruxton,’ enthuses ex-F1 and Le Mans star Blundell
Discounted advance tickets on sale from just £13 for May and August events

The stars of the Kwik Fit British Touring Car Championship and several of its support categories descended on Thruxton on Wednesday (17 April) for a key test ahead of a tantalising double helping of the UK’s premier motor racing series over the coming months.

For the first time since 2007, Thruxton will play host to the BTCC twice this season – on 18-19 May and 16-18 August. As the fastest circuit in the country – with speeds reaching an eye-watering 160mph through the quickest sections – the popular Hampshire track presents a unique challenge. That means every opportunity to put miles on the clock is precious – and between them, the 29 touring car drivers in attendance today logged more than 1,200 laps.

Whetting the appetite for the forthcoming race meetings, fans enjoyed free entry to the test to watch their tin-top heroes in action – and if the drivers’ awe-inspiring commitment through Thruxton’s flat-out sweepers is anything to go by, spectators are in for a real treat come May and August.

Halfords Yuasa Racing star Dan Cammish was arguably the most committed of all, setting a scintillating pace in the morning session that nobody could match in the afternoon. More than three tenths-of-a-second under the existing lap record, the Yorkshireman led a Honda Civic 1-2-3 at the top of the timesheets, ahead of BTC Racing’s Chris Smiley and Cobra Sport AmD AutoAid/RCIB Insurance ace Rory Butcher.

In evidence of just how close and intense the competition is in the BTCC, less than one second blanketed the gaggle of cars from Butcher in third all the way back to Stephen Jelley in 20th – setting the scene for six sensational races.

“I always enjoy coming to Thruxton,” enthused Cammish, the series’ reigning Jack Sears Trophy Champion. “It’s a lot of fun to drive and Honda has historically gone well round here. It’s a bit of a home track for us too, so it’s fantastic to have two race weekends this year.

“Thruxton is well-known as the fastest circuit in the country, and it feels every bit of it when you’re driving round. No matter how many laps you’ve done, Church corner never gets boring – it’s always an adventure. It’s enjoyable enough to drive on your own – but when you’re in a pack of 30 cars, it becomes a challenge like no other...”

Making his BTCC debut this year, the 1992 Le Mans 24 Hours winner is still finding his feet in the series and adapting to its famously cut-and-thrust, doorhandle-to-doorhandle nature. He admitted that he also needed to re-adjust to Thruxton’s particular demands, having not driven the track for more than three decades...

“Thruxton is pretty unique as a circuit, and I think everybody really enjoys coming here,” said Blundell. “It’s a one-off – there’s nowhere else like it in the world. It’s flat-out and the lap just unfolds in front of you, with extremely challenging corners like Church that call for maximum commitment. It’s a remarkable place. You get a slot of slipstreaming in the races – which is vital for the drivers and very exciting for the fans.”

In addition to the BTCC, leading lights from the F4 British Championship – the Formula 1 stars of the future – the Ginetta Junior Championship for prodigiously talented 14-to-17-year-olds and the Ginetta GT5 Challenge took to the track, offering a glimpse of the wide variety of entertainment to be enjoyed later this year.

Advance tickets for the two Thruxton BTCC race meetings are available from just £13 for Saturday entry and £29 for Sunday. Accompanied children aged 12 and under will be admitted free of charge.