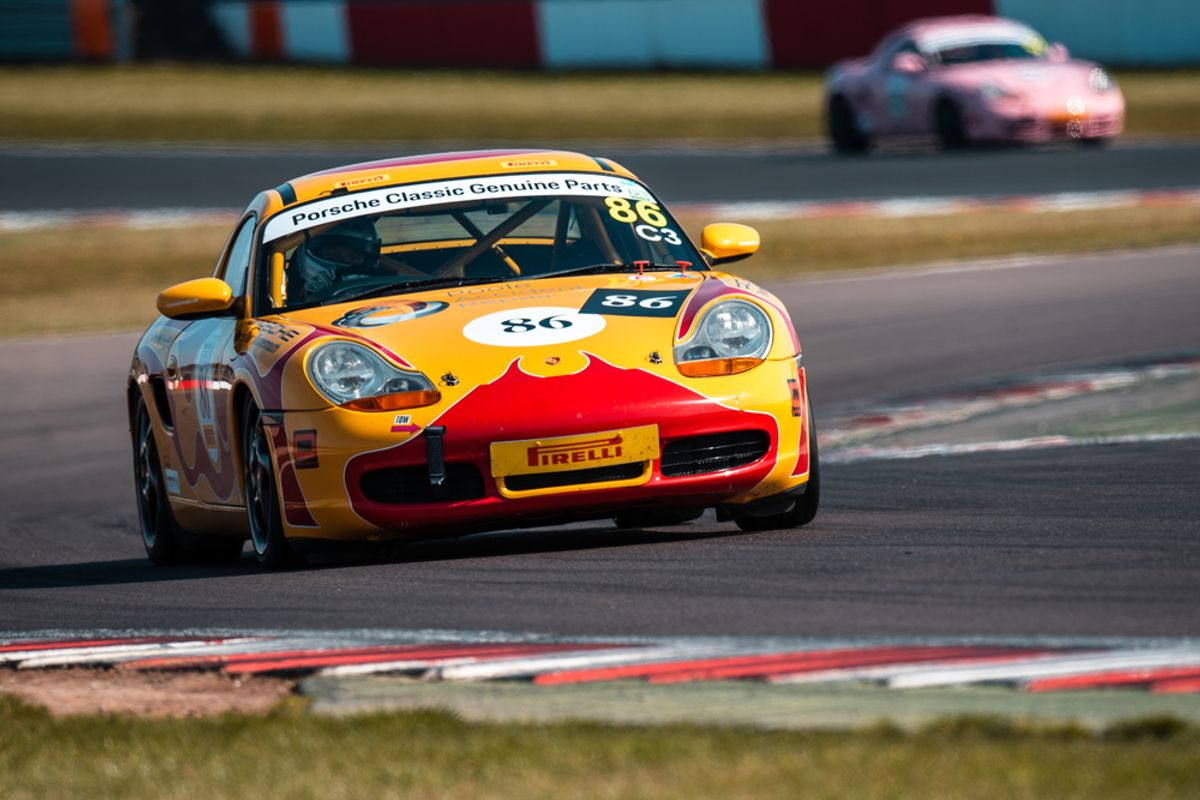 rounds one and two - race report

The Porsche Classic Restoracing Championship got 2019 underway at Donington Park on Saturday 20 April, with Porsche Centre Bournemouth opening their account with two wins from two races.

The National circuit was lit up by a grid of 15 identical ‘Type 986’ Boxster S race cars, each resplendent in a livery inspired by some of the most distinctive from the history of Porsche. With increased numbers over the championship’s inaugural season last year, for three meetings in 2019 the championship will run as a standalone race, the remaining two in combination with the Porsche Club Championship.

Ben McLoughlin (Porsche Centre Bournemouth) made his intentions clear for the day’s racing with a double pole position in the morning qualifying session, each driver’s second fastest lap dictating the grid for race two. Starting alongside on the front row for both races was Ollie Coles (Porsche Centre Swindon), while Matt Bird (Premier Panel Skills), guest driver from pistonheads.com, surprised with a debut third for race one and fifth for race two.

Perfect conditions carried over from qualifying to greet the grid as it formed up for race one. As the lights went out, it was William Heslop (Porsche Centre Wolverhampton) who made the best start, gaining a row to slot into second behind McLoughlin. Another fast starter was Alistair Nelson (Porsche Centre Wilmslow) who finished the first lap fourth, with McLoughlin leading from Heslop and Ollie Coles (Porsche Centre Swindon).

As McLoughlin pulled away in the lead, Coles fell down the order after a spin at the Old Hairpin and Bird was left to fight his way back to the front following a cautious first racing lap in the Boxster. Settling into fourth, Bird set after Nelson before taking back his starting position of third the next lap.

McLoughlin had made best use of the squabbling behind to pull over three seconds clear in the lead as Bird matched his times, eventually setting an identical fastest lap to McLoughlin. This left Heslop defending from Bird for the reminder of the 25-minute race, as the pair chipped away at the leader who by now could afford to pace himself.

As traffic came into place in the later stages of the race, the challenges settled and it was McLoughlin who took the win from Heslop and Bird. Nelson held off Hazelton, giving the pair fourth and fifth respectively. Julian Morris (Elite Motors) held a solid sixth while Cannon continued his progress, taking the flag in seventh. Coles recovered to eighth, while McCullough pipped tenth-placed Tordoff to ninth.

With the benefit of the first start of the season out of the way, the grid made an even and clean getaway for race two. McLoughlin made the most of his pole position to streak away over the opening lap, while Heslop gained one place from his starting position of third by passing Coles.

Hazelton maintained fourth, but Bird was demoted to sixth by a flying Nelson. In just his second race, Tordoff held eighth, battling with White and Cannon. Up front, McLoughlin stormed ahead, but behind the order was far from settling. The action was focused on the progress of Bird as he got into his stride, taking Nelson on lap three to claim fifth before closing straight up on Hazelton.

By the end of lap four, Bird had added Hazelton and Coles to his tally, chasing Heslop for second, much as he had done over the closing stages of race one. However, this time carrying on his forward momentum, Bird caught Heslop and into the chicane at the end of lap five made his move to claim second, taking fastest lap in the process.

Following this jostling for position, McLoughlin had stretched his lead out of the reach of Bird, even more so when the momentum of Bird’s charge took him into a wild spin at the Craner Curves on lap seven. The excursion, via the gravel trap, required a check over in the pits by the Premier Panel Skills team, dropping Bird out of contention, if not the race.

Finding the limit of adhesion in the hot conditions was a challenge, and on lap eight the safety car was deployed with Mark Duncan (Porsche Centre Glasgow) out of the race from 11th and Coles from fourth. The green flag came out for lap twelve, by which time the grid had closed back up on the leader. Despite this setback, McLoughlin held his lead to the end, sealing the perfect start to the season with a clean sweep – two pole positions, two fastest laps and two race wins.

Behind, Heslop once again fought through to take second, while Nelson rounded out the podium with a fighting drive from sixth on the grid. After qualifying in tenth, White ran as high as third before taking the flag in fourth, Cannon just behind in fifth. Hazelton held on for sixth, while Steven Shore (Shorade) rose from 12th on the grid to take seventh. Making even more progress, Mike Thompson (Porsche Centre Bolton) gained six places for eighth at the flag. Tordoff claimed ninth and Scot Adams (Porsche Centre Cardiff) rounded out the top ten with a fine drive from 15th.

Rounds three and four of the Porsche Classic Restoracing Championship will take place at the Brands Hatch GP circuit on 4 May, where the grid will be combined with the Porsche Club Championship in support of the Blancpain GT World challenge Europe. No fewer than four 911 GT3 R race cars will be challenging for honours in the main event, emphatically demonstrating the Porsche Motorsport Pyramid from grass roots to professional level.