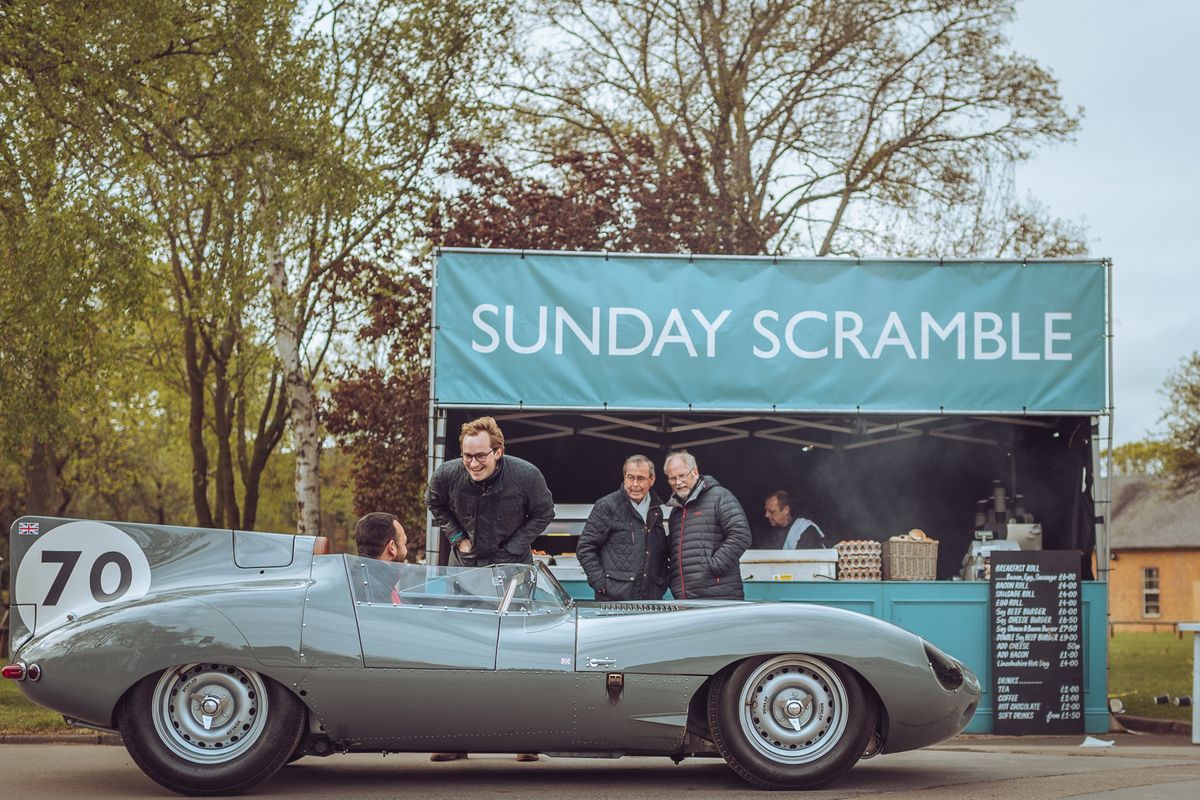 ‘Drive It Day’, the annual celebration of the UK’s thriving classic car movement, was celebrated in fine form at the latest Sunday Scramble with thousands of attendees, including 1,500 classics and 28 car clubs

Crowd favourites included a legendary Group C Jaguar XJR-12, a camouflaged prototype of the much-anticipated Aston Martin DBX, a genuine Group 4 Lancia Stratos rally car, one of 25 Jaguar Classic continuation D-types and the unique 1930 Aston Martin ‘Headlam’ Coupé among many others
In both the spirit of ‘Drive It Day’ and all Sunday Scramble events, the cars in attendance were hugely varied, eclectic and much admired by all

As always, the 40 specialist businesses from artisanal metalworkers to top-tier race car specialists put on superb displays while resident brewery the Wriggly Monkey provided ideal refreshments for the assembled Scramblers

Bicester Heritage is proud to welcome passionate vehicle owners and enthusiastic visitors to their unique site regularly, but the significance of raising awareness for our great British historic motoring culture, which brings such joy to us all, saw owners more eager than ever to join the Sunday Scramble event.

Held amongst the wartime buildings of the historic former RAF Technical Site, from the Motor Transport Yard to the Paddock, there was something special at every turn. From several immaculate early Volkswagen Golfs at rest next to thunderous competition Porsche 911s, a diminutive classic Fiat 500 adjacent to pre-War battle-scarred Rileys and a humble Mercedes-Benz W123 beside a genuine Lancia Stratos rally car to name but a few fantastic combinations. Though the cars on display differed vastly in age, purpose and value they were united on the common thread of passionate ‘Scramblers’.

Amongst the 1,500 historic vehicles, particular crowd favourites included the astonishing Jaguar XJR-12, a Le Mans veteran from the heady days of Group C racing, on display outside specialist Sports Purpose alongside a bevvy of Porsches. A plethora of beautiful pre-War machines were to be found across the site, including the 1923 Bequet Grand-Prix Delage found in Robert Glover Ltd’s showroom, the supercharged Gurney-Nutting boat tail Bentley in Kingsbury Racing Shop and the unique Aston Martin Headlam Coupé. Built for William Headlam, it turned heads even with the likes of the Ferrari 288 GTO a stone’s throw away, while up by the Paddock and Test Circuit the camouflaged Aston Martin DBX prototype was an unexpected discovery for the attendees.

Bicester Heritage’s timing partner Bremont decorated their Nissen Hut-style showrooms on the Main Drive with the addition of one of only 25 Jaguar Classic D-type continuations supplied by Jaguar Heritage, a perfect pairing for their proudly British timepieces.

The Heritage Skills Academy hosted three Ford GT40s on the lawn outside their apprentice training workshops, whilst tucked away in Pendine’s showroom, a Mittino designed Aston Martin V8 Zagato sat menacingly next to the curves of an AC Ace Bristol.  Bicester Heritage’s insurance partner, Hagerty UK completed their Drive It Day rally as cars crossed the finish line in the vast exhibition hall of Hangar 113, whilst outside their valuation area was abuzz with activity as all valuation assessment slots had been booked well in advance of the day.

A tremendous showing from 28 different car clubs added further colour to eclectic mix, with a pack of De Tomaso Panteras, Minis and everything in-between on display by their respective collectives. The Sunday Scramble car park has become a destination in itself as the event has grown and the selection of cars lined up on the Airfield’s perimeter were indicative of a shared desire to ‘Drive It’ on this special day.

Dan Geoghegan, Managing Director of Bicester Heritage, commented: “Our sell-out Sunday Scramble on historic motoring’s National Drive-it-Day was the perfect balance of spectacle, community and a fantastic atmosphere. We really wanted everyone to have the best possible experience and it all went like clockwork: careful planning meant an absence of any traffic issues and, with plenty of catering and even a little sunshine, resulted in the perfect formula. Our thanks to the thousands of classic motorists and supporters, we really enjoyed opening our doors for such a relaxed and inclusive family day.”

Bicester Heritage has just launched tickets for something special, or rather something super, as June 23rd will be the date of the inaugural Super Scramble. Promising to expand on the much-loved features of the traditional Sunday Scramble, this new event is sure to be another sell-out success. Discounted first release tickets are now available, via: http://bicesterheritage.co.uk/whaton/superscramble/

Prior to the Super Scramble, Bicester Heritage will host the first Petrolicious Drivers’ Meeting on the historic Technical Site. Tickets are now available and further information can be found via: https://petrolicious.com/articles/tickets-are-now-available-for-the-first-petrolicious-drivers-meeting-at-the-uks-bicester-heritage

Between a curated selection of vehicles that range from Rambo Lambos to homologation specials, a vintage Williams Grand Prix car (with matching transporter, naturally) to an ex-works Colin McRae Subaru Impreza WRC car, the group of 200-some cars is a hand-picked collection that celebrates tastefulness and diversity. With talks from former racing drivers, screenings of new and classic Petrolicious films, and an interwoven presence of artwork around the venue, this will be much more than your standard car show.

The majority of the specialist businesses based at Bicester Heritage will be opening their doors to visitors on the day of, so if you’ve never visited the world-famous Bicester Heritage complex before, you’re in for a treat, and if you’ve been a Sunday Scramble regular for a while, expect a superbly curated event with the same fantastic Bicester Heritage atmosphere.