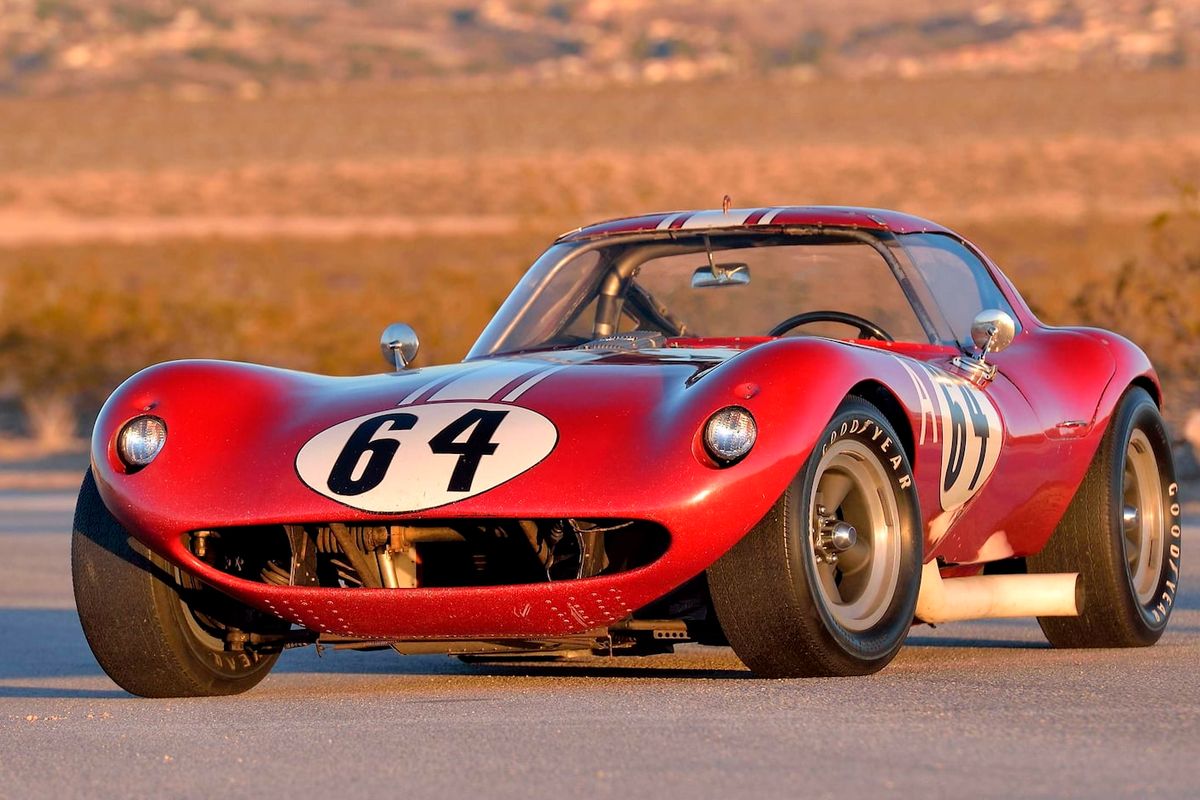 One of the most complete and original Cheetahs known to exist
Unrestored original condition
Cheetah no. 4 of 11 completed by Bill Thomas
Owned new and raced by Bud Clusserath
In 1965 Clusserath sold the car to Sam Goins
Goins maintained ownership of the car for 53 years until it was sold to Steve Juliano in 2018
Featured in Automobile Quarterly in 1981
Fuel-injected 327 CI Corvette engine
M21 4-speed transmission
C2 Corvette rear differential
Chevrolet stock car drum brakes
Letter of Authenticity by Bill Thomas III attesting to the car's originality

Automotive history abounds with stories of visionary thinkers whose creations, seemingly destined for greatness, instead became case studies in unrealized potential. One of the most notable of these stories is that of the formidable Cheetah sports racer, the brainchild of legendary California Corvette tuner and self-taught engineer Bill Thomas.

One of the Cheetah saga’s most fascinating chapters involves this incredibly original 1963 Cheetah coupe being offered from the Steven Juliano Estate Collection. It is one of the first two fiberglass-bodied Cheetahs built after the original two aluminum-bodied prototypes were presented for evaluation by Chevrolet engineers. According to Thomas, a Cheetah supposedly achieved 215 MPH at Daytona in 1964. Whatever the truth, this car’s original owner, Bud Clusserath, and fellow Cheetah owner and racer Ralph Salyer, set track records all over the country, including 185 MPH at Elkhart Lake, a mark that stood for several years.

In 1965 Clusserath sold the car to Ohio racer Sam Goins, who ran it until 1970, amassing an impressive record during that time. Goins maintained the car in its original race condition for the next 48 years, occasionally exercising it at gymkhana events and shows, and finally selling it at auction to the Juliano Collection in 2018 after 53 years as its second owner.

Long known as the Clusserath Cheetah, the car’s first run at Daytona in 1964 caused its fiberglass body panels to balloon under the pressure created by air trapped inside at speed, eventually blowing out the tops of its gullwing doors. On Salyer’s car, which was similarly affected, Crowe’s solution was to convert it into a roadster, but because Clusserath preferred the look of the coupe, Crowe installed safety latches on the door tops, reinforced the body at crucial points, and modified the belly pan and radiator ducting to increase air flow.

Bill Thomas had earned the nicknamed “Mr. Corvette” for his long run of race-winning Corvettes, and in 1962, his latest racer, a new Sting Ray coupe, ran smack into Carroll Shelby’s new creation. The Cobras immediately began laying waste to the competition, and Corvettes were no exception; even Zora Arkus-Duntov declared, “the writing is on the wall,” after watching his new Z06 coupes barely survive their first outing against a Cobra at Riverside.

Thomas knew the only way to beat Shelby was to take the same approach, packing American horsepower into a lightweight platform, which the Cheetah certainly was. In its original configuration, the Clusserath Cheetah’s output surpassed 520 HP on Champion’s company dynamometer in Long Beach. Crowe specially built that first engine, which was bored out to 377 CI and used Rochester fuel injection modified with dual air metering, and it remained in the Cheetah until Clusserath put the car up for sale in 1965.

That is when Goins entered the picture. He and his wife had been regular attendees at the SCCA Runoffs held each September at Elkhart Lake when he first saw the Cheetah there in 1965. Clusserath had put a “For Sale” sign in the window in anticipation of replacing the car with a new McKee Mk VI, and he had swapped the Crowe-built 377 CI engine with an L84 327 Fuelie Corvette unit that Crowe modified to produce an estimated 485 HP.

Goins purchased the Cheetah on the spot; already experienced in gymkhana racing with his own fuel-injected Corvette, he successfully raced the Cheetah in sports-car competition at Mid-Ohio, Nelson Ledges, Lindale Farms, Road Atlanta and other eastern tracks. Aside from regular maintenance, the only modifications he made to the Cheetah were a driver-operated choke and the installation of a heavy-duty radiator after rebuilding the engine.
Thoroughly documented and famously featured in “Automobile Quarterly,” Volume 19-3, the car is otherwise original and unrestored. Bill Thomas’ son, Bill Thomas III, has certified this car as No. 4 of the 11 first-design original Cheetahs, writing in a letter to Sam Goins dated March 11, 2018, “Your Cheetah absolutely is one of the most complete and original Cheetahs, and it lives up to its reputation as looking like it was in a time capsule ... This letter certifies that the undersigned, Bill Thomas III, has thoroughly inspected Sam Goins’ Cheetah #4. The undersigned authorizes that this Cheetah meets the specifications of a Bill Thomas Race Cars/Bill Thomas Motors Cheetah, produced at, 510 E. Julianna St., Anaheim, California 92801. The undersigned authorizes that this Cheetah includes the following appropriate in period components: Chevrolet Corvette 327 Rochester fuel injected engine, Muncie M21 transmission, C2 Corvette rear differential, Chevrolet stock car drum brakes, and a Jones Motorola, key reset, tattle tell, racing tachometer.

”The undersigned believes that this Cheetah #4, is the Cheetah sold to Bud Clusserath, January 1964, by Bill Thomas Motors, a California corporation.”