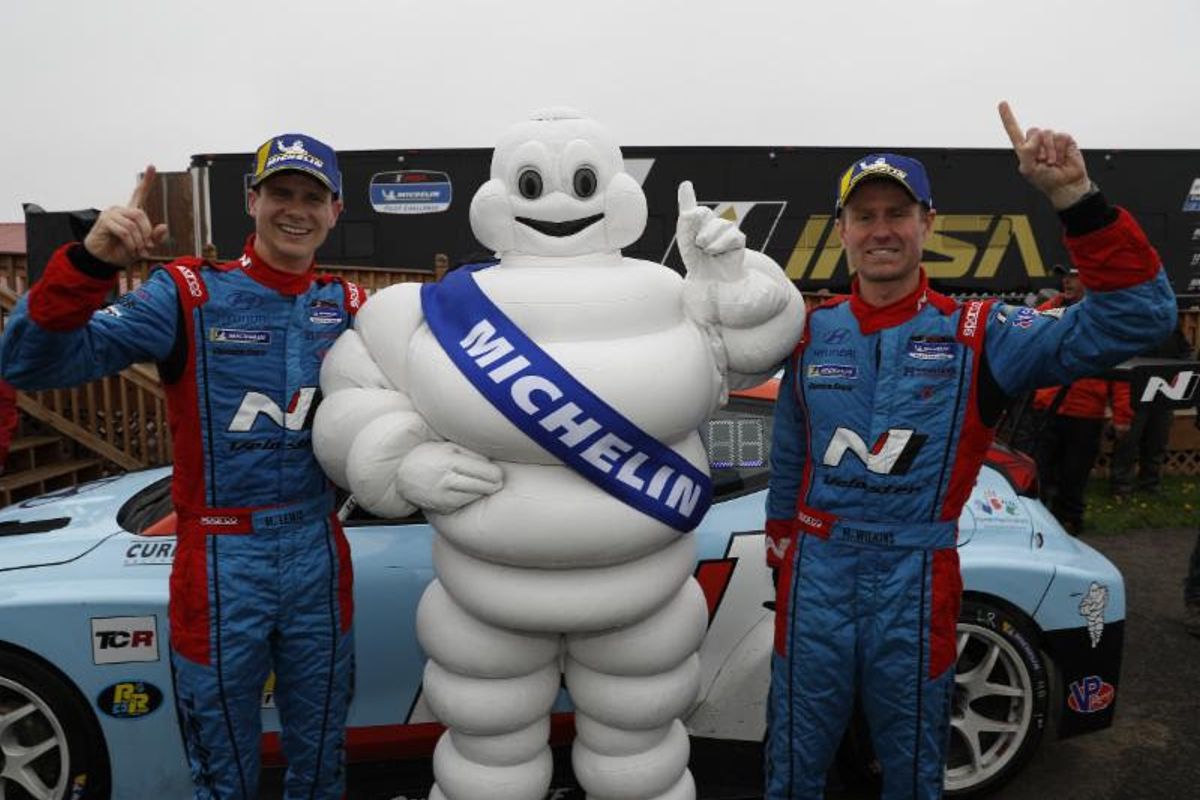 In Intense TCR Battle at Mid-Ohio

All eyes were glued to the IMSA MICHELIN Pilot Challenge TCR battle in the final 15 minutes at Mid-Ohio Sports Car Course on Saturday.

It was Hyundai versus Audi as the race approached the checkered flag, with Bryan Herta Autosport’s No. 98 Hyundai Veloster N battling against Audi RS3 LMS entries from Mark Motors Racing and Roadshagger Racing by eEuroparts.com.

Michael Lewis in the No. 98 Hyundai had all he could handle against Remo Ruscitti in the No. 81 Mark Motors Audi, with the two continuously swapping lead changes. The No. 61 Roadshagger Audi of Jon Morley lurked in third and was looking to make a move to second if one of the top two faltered.

Two moves decided the race with the first coming with less than three minutes remaining. At that point, Lewis slid his Hyundai around Ruscitti and a GS car blocking the latter to take the lead. The move solidified Hyundai’s first IMSA win in just its third start for Bryan Herta Autosport, Lewis and co-driver Mark Wilkins.

“I’m so happy I was in this Hyundai Veloster N,” said Lewis. “It was really grippy. I was confident in the car, and then the only thing I was thinking about is where to place my car because Remo behind me was doing a good job of placing his car in that traffic. So, I was thinking about each corner ahead and then even a bit further ahead to see where he would time a run. With about two laps to go, I thought I had to make this one move, and if I was going to crash, that was what I had to do to try to win. And if I would’ve crashed, hey, it happens.

“We ended up sticking it, I think it was on the outside of eight or nine on a Mustang and got some clear air. Then in the last corner again, another Mustang got in the way, but we were able to get the win. Honestly, it was just pure driving. That was touring car racing and multi-class racing at its best.”

The No. 98 team also won the “Spirit of the Race” award presented by Forgeline in conjunction with IMSA Radio.

“It was an amazing day getting the first IMSA win for the team, and the first IMSA win for the Veloster N TCR car,” said team owner Bryan Herta. “What a race to win because I have a lot of history here at Mid-Ohio. I have raced here a lot of years, and I couldn’t think of a better place for it to happen or how it happened. It came down to the very last corner on the very last lap. Our guys were fighting and swapping positions, and I am proud of everybody on the team.”

With Lewis’ pass, Ruscitti was relegated to second and left to battle Morley. Contact with the No. 61 sent Ruscitti spinning into the grass, ultimately winding up fourth, and Morley with co-driver Gavin Ernstone runner-up.

Ruscitti and co-driver Marco Cirone are part of a newly announced, part-time Pilot Challenge effort for 2019 with their next race coming in June or July.

Rounding out the podium in their best finish-to-date as rookies were Russell McDonough and Ryan Nash in the No. 12 eEuroparts.com ROWE Racing Audi RS3 LMS.

The next IMSA MICHELIN Pilot Challenge race comes at Watkins Glen International on Saturday, June 29. The Tioga Downs Casino Resort 240 is the second of two, four-hour races on the 2019 schedule.

﻿The television broadcast of the Pilot Challenge race from Mid-Ohio will air on Saturday, May 11 at 11 p.m. ET on NBCSN.