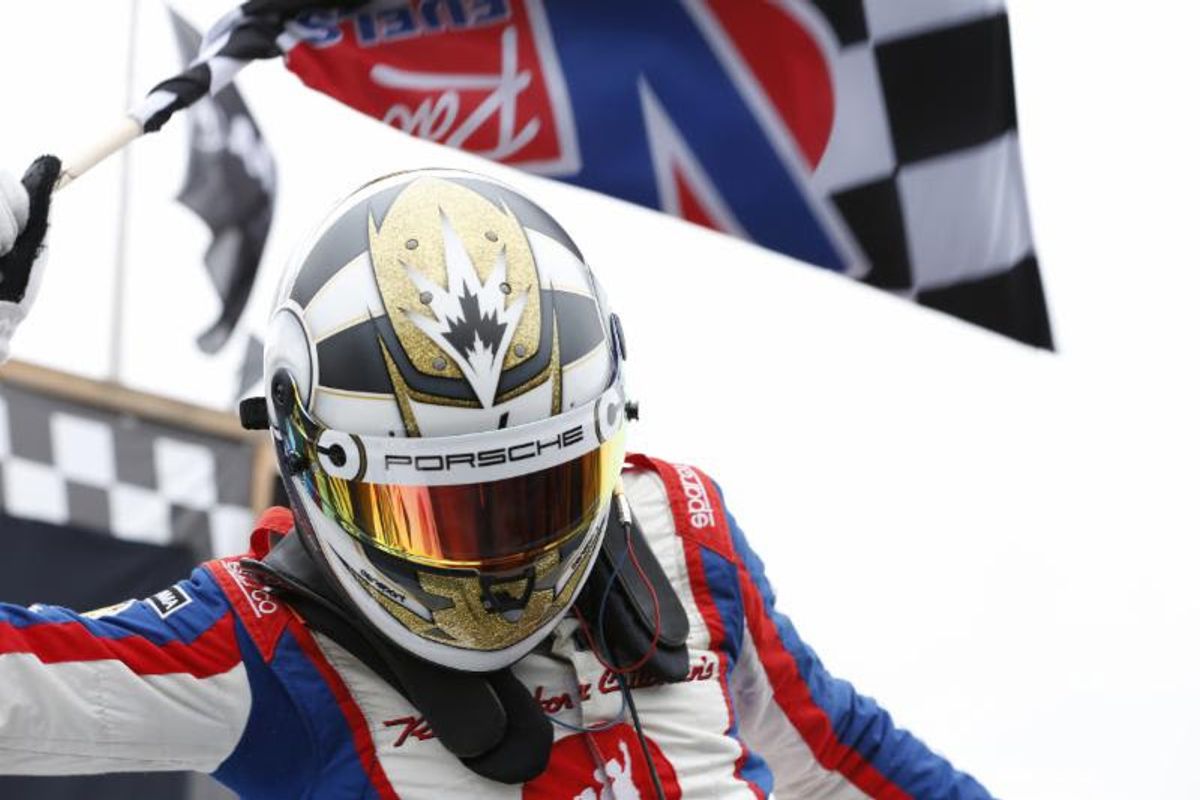 For the third time in four 2019 Porsche GT3 Cup Challenge USA by Yokohama races, 18-year-old Canadian Roman De Angelis is a race winner in the No. 79 Kelly-Moss Road and Race Porsche 911 GT3 Cup car.
But this win at Mid-Ohio Sports Car Course was a far bit tougher than De Angelis’ first two – which both came in pole-to-checkered flag runs last month at Barber Motorsports Park. This time, De Angelis had to fight his way past fellow Canadian Parker Thompson in the No. 3 JDX Racing Porsche, who celebrated his first series victory Saturday afternoon in the first race of the weekend doubleheader at Mid-Ohio.

Thompson started Sunday’s 45-minute race from the pole position by virtue of setting the fastest lap in Saturday’s race and pulled into the lead at the drop of the green flag. De Angelis, meanwhile, started third and quickly found his way past second-place starter Riley Dickinson in the No. 53 Moorespeed Porsche and set out after Thompson.

De Angelis began applying pressure within the first 15 minutes of the race, but Thompson fought valiantly to keep the No. 79 Porsche in his mirrors. But De Angelis seemed to be just a bit faster than Thompson and found his way into the lead with just over 25 minutes remaining in the race. He led the rest of the way en route to a 5.052-second victory over Thompson.

“We pushed really, really hard,” De Angelis said. “It was really difficult because we started third. I had to get by a few cars. Parker didn’t make it really easy for me. We were driving pretty aggressive, so I had to push to get by him. Then, after that, what an amazing job. The No. 79 Racing for Children’s/Medical Properties Trust Kelly-Moss car was on rails once again.

“I just can’t thank them enough. I’d like to be four-for-four right now, but it is what it is. We’re just going to keep gathering these points and pull out as big of a lead as we can and hopefully take the championship at the end. That’s what we’re here for.”

The win allowed De Angelis to extend his lead in the Platinum Cup championship standings for 911 GT3 Cup cars built between 2017 and 2019. He now has 137 points, 10 more than Thompson heading into the next two rounds of the season next month in Montreal as part of the Formula 1 Canadian Grand Prix weekend.

Thompson, meanwhile, now has podium results in all four of his GT3 Cup Challenge USA starts to date. In addition to his Saturday win, he also finished third in both races at Barber. Rounding out the Platinum Cup podium was Max Root in the No. 7 Wright Motorsports Porsche with a third-place showing. Root also finished third in Saturday’s race.

The Platinum Masters class for drivers age 45 and over had its 100th race as part of the GT3 Cup Challenge USA on Sunday and fittingly had a spirited battle for the victory. Reigning class champion Alan Metni came away with the win in the No. 99 AM Motorsports/Kelly-Moss Porsche, but not without a fight that included Charlie Luck in the No. 45 Wright Motorsports Porsche and the Topp Racing machines of David Baker in the No. 56 and Bill Smith in the No. 42.

The four cars ran nose-to-tail with Luck as the leader until Metni finally found his way past with under 15 minutes to go. It was Metni’s third victory in four races this season and enabled him to extend his Platinum Masters points lead to 18 over Fred Poordad, 135-117.

“I just love it here at Mid-Ohio,” Menti said. “This was where I had my first win (in 2018) and it was nice to come back here and do well. The team gave me a great car. I also want to thank my wife and my kids for making it possible for me to be out here.

“There’s great racing in the Masters division. Those guys are wonderful to race with and learn from. Charlie and Mark (Kvamme) and David and Bill, they did a phenomenal job and I’m delighted to be able to race with them.”

Baker wound up second in Platinum Masters after an incident between Luck and Smith battling for second took Luck off the road and Smith on to pit lane for a drive-through penalty for incident responsibility. Local racer Kvamme took the third and final spot on the podium in the No. 43 JDX Racing Porsche.

It was also a nail-biter in the Gold Cup class for 911 GT3 Cup machines built between 2014 and 2016. Sebastian Carazo ended up sweeping the weekend in the No. 27 NGT Motorsport Porsche, but just barely. After leading throughout the race, Carazo had to win a drag race from the final turn to the finish line with Rob Ferriol in the No. 5 TPC Racing Porsche, which he did by a scant, 0.052 seconds.

Like De Angelis and Metni, Carazo also picked up his third win in four races this season to extend his Gold Cup points lead. With 135 points, he is 12 points ahead of second-place Kurt Fazekas, who finished third in Sunday’s race in the No. 52 Kelly-Moss Road and Race Porsche.

With a fourth-place class showing and a 14th-place overall result, Curt Swearingen earned the Yokohama Hard Charger Award for Race 2 as the Gold Cup driver who improved the most positions from start to finish in the race. He started 17th on the overall grid.
The Mid-Ohio rounds will be televised on NBCSN at 1 p.m. ET on Monday, May 13.
﻿
Next up for the GT3 Cup Challenge USA is the first of two combined events with the Porsche GT3 Cup Challenge Canada by Yokohama at Montreal’s Circuit Gilles Villeneuve on the weekend of June 7-9.