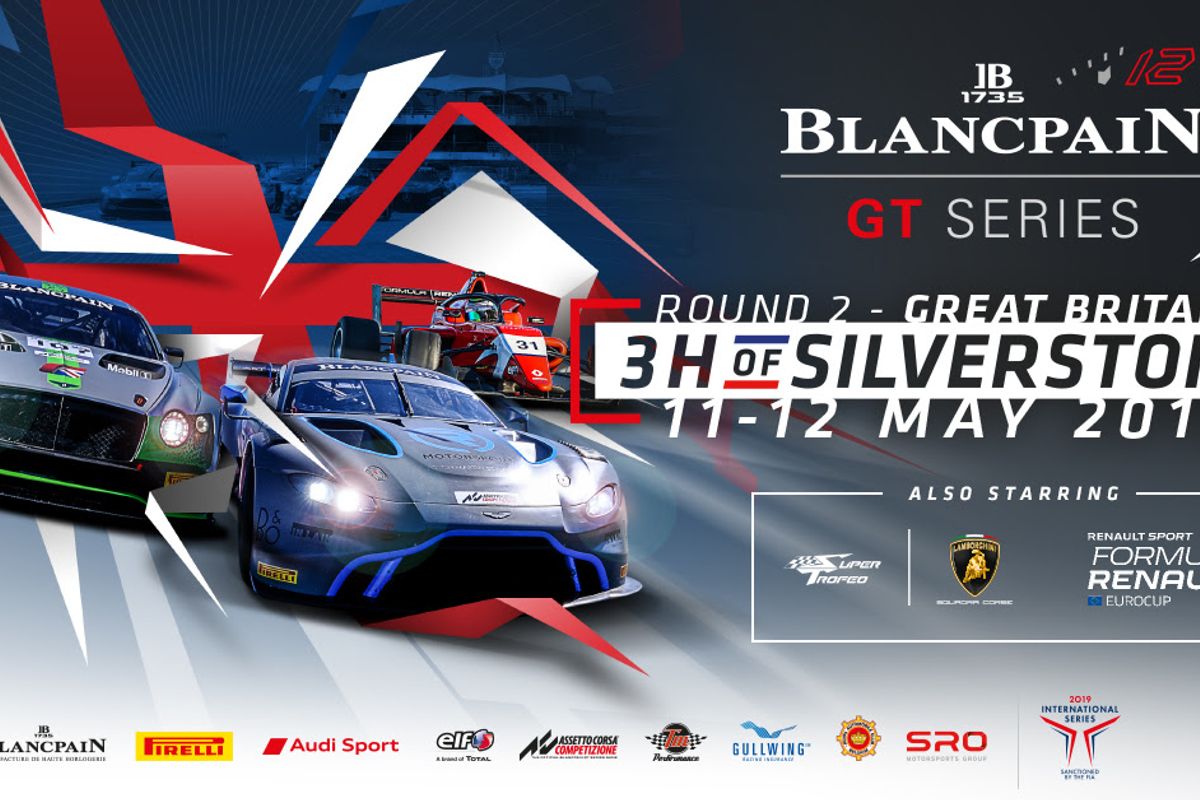 The Blancpain GT Series will contest its second event on British soil within the space of a week on Sunday (12 May) when a 48-car grid tackles a three-hour Endurance Cup race at Silverstone.

Following hot on the heels of last weekend's Blancpain GT World Challenge Europe season-opener at Brands Hatch (4/5 May), the Silverstone contest will see the historic Northamptonshire venue stage its ninth event since the formation of the Blancpain Endurance Series in 2011.

Built on the site of a World War II bomber station, Silverstone began its new life as a race circuit in 1947. The modern 5.9km layout is known for its high-speed Maggotts-Becketts-Chapel sequence of corners, as well as the long run down Hanger Straight into a potential overtaking spot at Stowe.

Though passing comes thick and fast during Blancpain GT Series events, this is a race at which grid position is vital. In eight previous runnings the winner has always started from the first two rows, making Sunday morning's qualifying session particularly important.

With a hugely competitive grid ready to do battle, another gripping encounter is in store as the Endurance Cup resumes hostilities at Silverstone.

There will be 18 Pro class cars on the grid at Silverstone, with the entry list featuring no changes to the top-tier field from the opening contest at Monza. The event will be particularly significant for leading British brands Aston Martin and Bentley, both of which will be in the hunt for Pro class victory at Silverstone.

Bentley celebrates its centenary this year and will once again launch a two-car assault run by the accomplished M-Sport squad, with British stars Steven Kane and Alex Buncombe among the driving talent. In a nod to its landmark anniversary, the Continental GT3s will compete as #107 and #108 as they go in search of Bentley's first win at this event since 2014.

A second Silverstone triumph would draw Bentley level with Aston Martin, which took overall honours in 2013 and repeated the feat last year thanks to the R-Motorsport squad. Aston will look to defend its win using a new car – the Vantage AMR GT3 – and has three Pro class machines entered for the race, with Garage 59 joining the two-car R-Motorsport effort.

Among the British marque's leading rivals, Porsche is in particularly strong form this year. Not only did Dinamic Motorsport's 911 GT3 R seal victory at Monza, the similar machines run by ROWE Racing also showed front-running pace throughout. Lamborghini began the season in style too, as series newcomer FFF Racing secured a superb runner-up finish with its Huracan GT3. As well as two Pro cars from the Chinese squad, the Italian marque will also be represented by 2017 Silverstone winner Grasser Racing.

There is significant strength among the Mercedes-AMG runners. Their effort is led by reigning overall champions AKKA ASP Team and reigning Endurance Cup champions Black Falcon, while local squad Strakka Racing will also field the AMG GT3 at Silverstone. In the Ferrari camp, SMP Racing will hope to secure the Italian marque's maiden series victory at Silverstone with its #72 488 GT3.

One of the most surprising statistics about this event is that is has never resulted in an Audi victory, and the German marque has a trio of entrants looking to put that right this weekend. Sainteloc Racing, Belgian Audi Club Team WRT and Attempto Racing will all run the 2019-spec R8 LMS and complete a formidable Pro field.

In addition to the battle at the front, there are three competitive classes looking to steal the headlines at Silverstone. In the Silver Cup, the pre-event favourites hit the ground running at Monza as the #90 AKKA ASP Mercedes-AMG won (4th overall) from the #6 Black Falcon Mercedes-AMG (5th overall).

A stellar 14-car field will tackle the Silverstone round, with ample competition for the Mercedes-AMG duo. Lamborghini will be represented by five cars, including efforts from local squad Barwell Motorsport and international stars Grasser Racing. There will also be four Audi entrants on the grid, two from the mighty Belgian Audi Club Team WRT.

Local fans will be particularly interested in the Jenson Team Rocket RJN squad, a collaboration between series stalwart RJN Motorsport and British racing icon Jenson Button. Fielding a Honda NSX GT3 in the distinctive livery that carried Button to the 2009 F1 title, the #22 car ran well at Monza and should be among the podium contenders at its home event. Rinaldi Racing (#333 Ferrari 488) and newcomer GPX Racing (#20 Porsche 911 GT3 R) complete a highly competitive Silver field.

The Pro-Am class will see Tempesta Racing looking to repeat its Monza triumph, but the crew of Chris Buncombe, Jonathan Hui and Chris Froggatt will face stiff opposition. They were joined on the podium in Italy by Sainteloc Racing (#26 Audi R8 LMS) and Oman Racing with TF Sport (#97 Aston Martin Vantage AMR), with both featuring strong combinations of professional and amateur racers.

The opening event was characterised by misfortune for a number of Pro-Am squads. In particular, Silverstone offers a chance for Team Parker Racing (#31 Bentley Continental) and AF Corse (#52 Ferrari 488) to rebound strongly. Mercedes-AMG outfits Ram Racing and AKKA ASP Team also hit problems at Monza and will be looking to return to the podium this weekend.

A strong Am Cup category is led by British squad Barwell Motorsport, which enters its home race as reigning class champion and off the back of three successive wins. Among its leading contenders, the #188 Garage 59 Aston Martin crew of Chris Harris, Alexander West and Chris Goodwin will hope to repeat the triumph they secured last season.

The Am field will also feature a trio of Ferrari 488s, two from brand loyalist Rinaldi Racing and another from HB Racing. Raton Racing by Target will enter a Lamborghini Huracan, while Boutsen Ginion will split its strategy between a Huracan and a BMW M6. Finally, the Panis-Barthez/Tech 1 squad will make its second outing with the #23 Lexus RC F.

Like Monza, the Silverstone weekend will be preceded by official testing on Thursday and Friday. Thereafter, the event follows the usual Endurance Cup schedule, with the first full-field sessions taking place on Saturday when Blancpain GT Series competitors will tackle free practice at 10.45 and pre-qualifying at 15.45. The action builds to a crescendo on Sunday, beginning with qualifying at 09.45 and culminating in a three-hour race at 15.00

Saturday will enjoy plenty of competitive action too thanks to support from two leading championships. Renowned junior single-seater series Formula Renault Eurocup will stage a pair of races across the weekend as it makes the second of seven appearances on this year's Blancpain GT Series package. There will be additional GT racing action as well thanks to longstanding support category Lamborghini Super Trofeo, which joins the bill for the first time in 2019.

With competitive classes, highly-skilled competitors and a wealth of machinery on display, another truly gripping Blancpain GT Series contest is in prospect at the home of British motorsport.