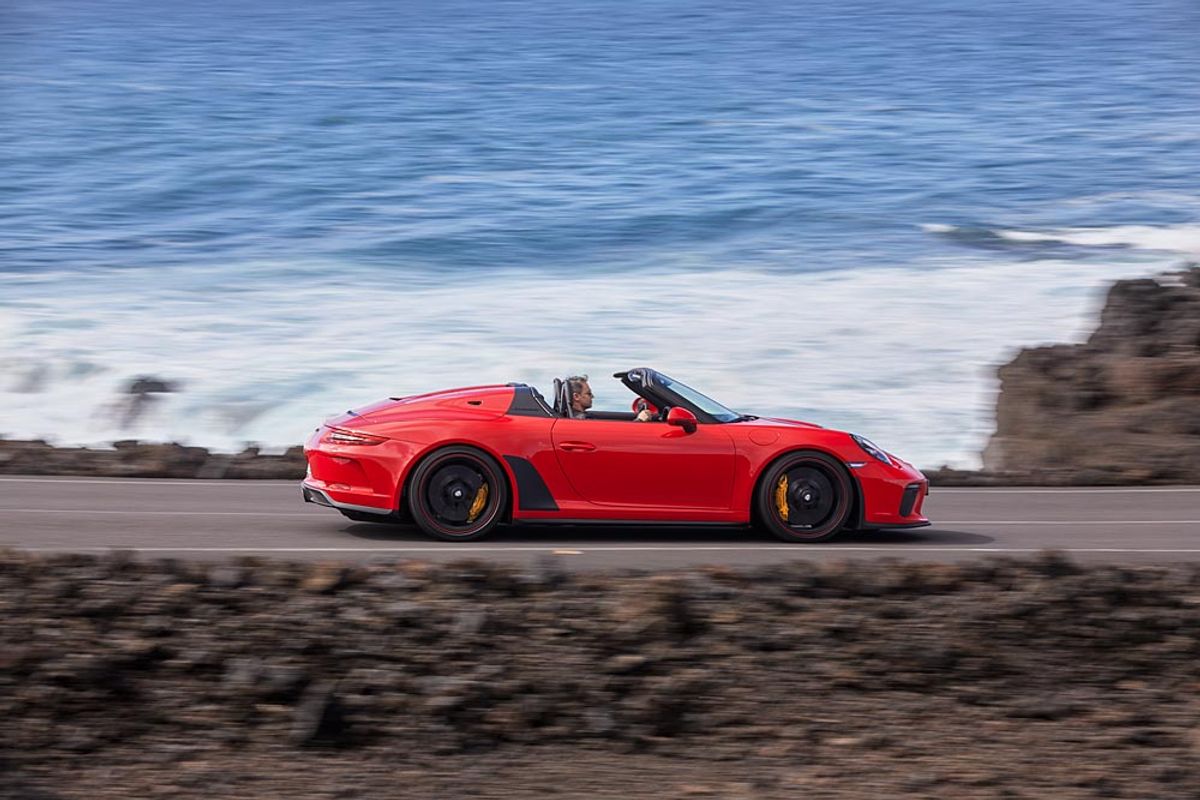 Visually, the new Porsche 911 Speedster establishes a bridge to its own history – to the forebear of all Porsche sports cars, the 356 “No. 1” Roadster from 1948. The open-roof, two seater 911 Speedster is reminiscent of this car; focused, driver-oriented and featuring motor sports technology yet at the same time suitable for everyday use. A high-revving 510 PS (375 kW) four-litre naturally aspirated, rear-mounted flat-six ‘boxer’ engine delivers an emotive sound experience in the cockpit. The six-speed GT transmission is shifted manually.

The Porsche 911 Speedster caused a sensation when it was presented as a concept vehicle last year. The 911 R (2016) and 911 GT3 served as a basis for development. Now, series production begins and 1,948 units will be manufactured from mid-2019 at the Porsche plant in Zuffenhausen, Germany.

As a concept, the 911 Speedster celebrated its world premiere in 2018 at the ceremony for the “70 Years of Porsche Sports Cars” anniversary in Zuffenhausen. Other public appearances followed at the Goodwood Festival of Speed, England, the Rennsport Reunion VI in Laguna Seca, California as well as the Paris Motor Show in October. Numerous Speedster elements that characterised the concept vehicle can be seen in the same or similar design on the production car.

Taking centre stage is the distinctively-shaped convertible top compartment lid with its double-bubble streamlined headrest cowls – a quintessential feature of this sports car type since the 911 Speedster from 1988. Made of a single piece of carbon-fibre reinforced plastic, it is the largest and most complex component to date that Porsche has used in a road model. Two trim elements in the double bubbles make room for the roll-over protection system, which is included in the two-seater as a standard feature like the 911 Carrera Cabriolet.

A weight-saving roof structure replaces the basic tonneau cover of the concept vehicle. In contrast to its pure design appearance, the fabric convertible top is suitable for everyday use. Together with the shortened window frames with their lowered cowl top panels and the smaller side windows, it gives the 911 Speedster an athletic profile. This low roof profile ‘fly line’ hints at the design language of historic models such as the Porsche 356 Speedster from 1954.

The convertible top takes no effort to operate: the central locking hook at the windscreen frame and both the side fins of the fabric roof are released at the push of a button. The lightweight carbon fibre rear lid is electrically unlocked and slides back a short distance, is then positioned by hand and makes room for the fabric roof, which folds into a Z-shape behind the front seats. The cover can then be closed again effortlessly once the roof has folded into position. The roof is closed again in the same way – only the roof fins on the left and right of the streamliners have to be pressed by hand into their holders until they perceptibly engage.

Rear spoiler and rear apron of the 911 GT3 Touring
Principles of lightweight design also dictate other body components of the Speedster. The carbon-fibre composite bonnet – which is two kilograms lighter than that used on the 911 GT3 – and the carbon-fibre composite wings originate from the 911 R. The front apron was borrowed from the GT3, but the front spoiler lip is a completely new development. Instead of the Talbot mirrors used on the concept vehicle, the production version of the new Speedster features electrically adjustable and heated Sport Design exterior mirrors. The extending, aerodynamically tuned rear spoiler and rear apron have been adopted for the Speedster from the 911 GT3 Touring.

The interior is distinguished by black leather elements for the side bolsters and head restraints of the carbon-fibre composite full-bucket seats, the armrests in the door trims and the shortened gear lever. The centre panels of the seats are upholstered in perforated leather, while the lightweight door panels with black door pulls and stowage nets reduce the overall weight.

“Speedster” logos adorn the head restraints and the visible carbon door sills as well as the central rev counter. Like the other instruments, it has black dials with white needles as well as green digits and scales – features reminiscent of its famous forebear, the 356 Speedster. A unique badge on the cross structure behind the front seats shows the serial number of each car, limited to just 1,948 units.

Customers can also order a Heritage Design package. Created by Style Porsche and implemented by Porsche Exclusive Manufaktur, this equipment reinterprets classic elements from the 1950s and ‘60s. This includes a Black and Cognac interior colour scheme with golden details. Special “spears” paintwork in White for the front fascia and front wings is applied to the basic vehicle paintwork, which is GT Silver Metallic. Historic-inspired motor sports decals for the doors and front lid complete the picture. Owners can in turn select their own maximum two-digit start numbers as shown in the photos. The Porsche crests and the gold-coloured logos correspond to the designs used in the 1950s and ‘60s. The Heritage Design package costs £15,302.00 inc VAT.

High-revving engine with 510 PS
The heart of the new Speedster is adopted from the revered 911 GT3. The naturally aspirated six-cylinder boxer engine with four-litre displacement is a pure GT engine. The peak power of 375 kW (510 PS) is reached at 8,400 rpm, with the maximum engine speed at 9,000 rpm. The engine delivers a maximum torque of 470 Newton metres at 6,250 rpm. Thus, the new 911 Speedster accelerates from zero to 62 mph in 4.0 seconds and where permitted can reach a top speed of 192 mph (310 km/h). The Combined fuel consumption is 20.6 mpg in accordance with WLTP (317 g/km CO2 NEDC equivalent).

Compared with the previous 911 GT3, the engine in the Speedster is fitted with two gasoline particulate filters (GPF) and complies with the emission standard Euro 6d TEMP EVAP-ISC (EU6 DG). However, the four-valve engine still develops a further ten horsepower on top. Following detail improvements such as the high-pressure fuel injectors with optimised spray pattern, the engine develops an additional ten horsepower. On top, a modified intake system with individual throttle valves enables a more spontaneous response to throttle input. And the new lightweight stainless steel sports exhaust system is now 10 kilograms lighter - including the two particulate filters.

Befitting its status as a driver’s car, Porsche only offers the 911 Speedster with a manual six-speed sports transmission. It features an auto-blip function which precisely and independently compensates differences in engine speed between the gears when downshifting through automatic throttle blips. Auto-blip can be activated at any time, in other words also independently from the chosen PASM (Porsche Active Suspension Management) variable damping system setting.

The GT philosophy behind the new Speedster is also reflected in its chassis tuning. With its rear-axle steering and dynamic engine mounts, the responsive chassis is based on the technology of the 911 GT3 and 911 R. Control systems such as Porsche Torque Vectoring (PTV) with a mechanical rear limited slip differential, Porsche Stability Management (PSM) and PASM with sports tuning - lowered by 25 mm - have been precisely adapted to the requirements of the new Speedster model. The open-top two-seater runs on 20-inch forged Speedster alloy wheels with central locking nuts, and the standard equipment also includes PCCB braking system (Porsche Ceramic Composite Brake).

The new 911 Speedster is available to order from Porsche Centres in the UK from today, priced from £211,599.00 RRP including VAT.

Customers will also be invited to explore the potential of their new car, and further develop their own skills behind the wheel, by participating in a bespoke driving experience around the unique tracks at the Porsche Experience Centre, Silverstone.