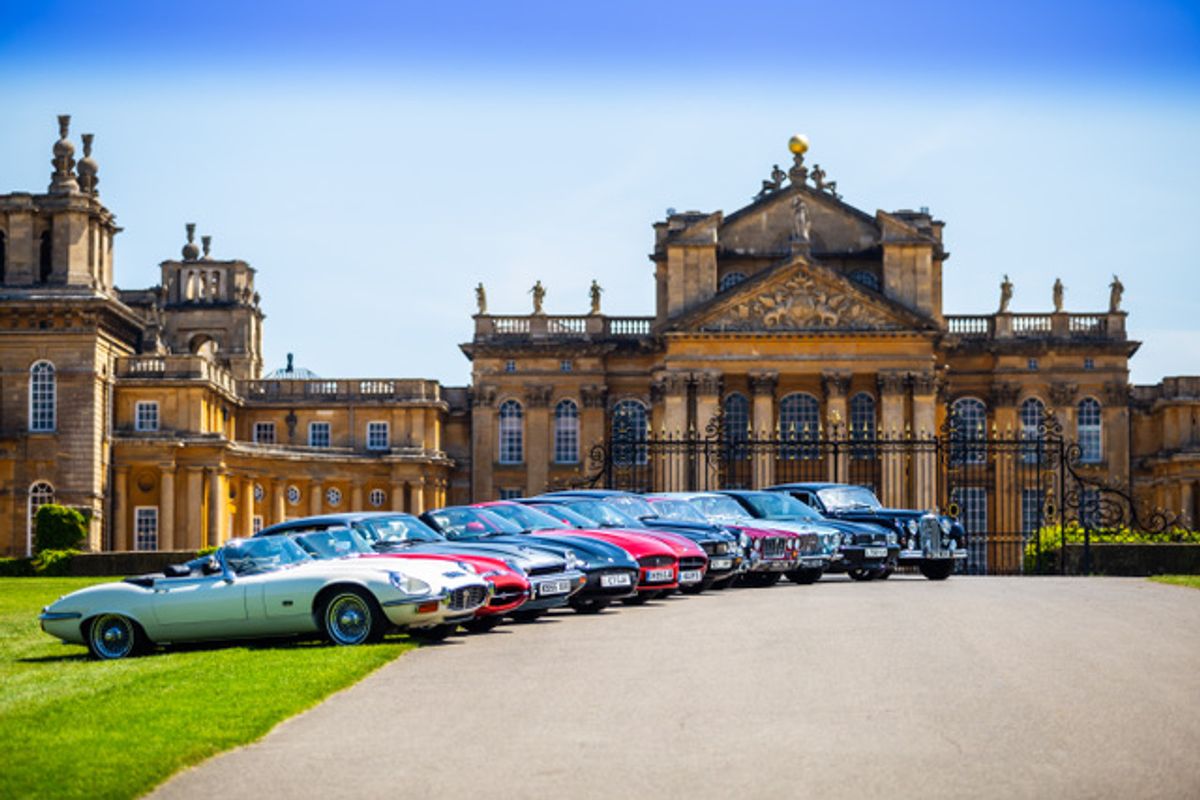 Hundreds of Jaguars on display from every era
World’s largest collection of Jaguars from Film and TV on display in the palace courtyard
Legendary TWR Racing team members reunited alongside display of racing cars
Special parade of over 100 Jaguars takes to palace parkland to mark the 60th anniversary of the Jaguar Mark 2, a car immortalised by Inspector Morse.
Tickets available on the gate at £40 per car with up to 5 occupants.
Inspirational racing drivers from Invictus Games Racing team present.
Large outdoor TV showing interviews with guests and a live screening of Spanish F1 race.

Blenheim Palace in Oxfordshire will be graced by the spectacle of hundreds of classic and modern Jaguars on Sunday 12th May, for the 2019 Summer Jaguar Festival, hosted by the Jaguar Enthusiasts’ Club. The event promises to offer something for everyone for fans of the iconic British car brand to families looking for a great day out.

Set in the stunning surroundings of the Blenheim Palace courtyard, visitors will be presented with the largest gathering of Jaguars from Film and TV, ever seen. The display will include a full range of vehicles from James Bond films, cult classics such as the E-Type from the Italian Job and cars from TV dramas including the Mark 1 saloon from the hit series Endeavour. Fans of the 1970s show Minder will be excited by Arthur Daley’s very own Jaguar XJ6 as used in the TV classic, a car that has rarely been seen since filming ceased.

The Jaguar Mark 2, synonymous with the exploits of TV detective Inspector Morse, celebrates 60 years since it went on sale this year. This momentous occasion will be marked by a procession of over one hundred classic Jaguars from all eras around the usually closed roads of the Blenheim Palace parkland.

The courtyard will also feature appearances from the inspirational team behind the Jaguar F Type currently racing in the British GT championship. Visitors will not fail to be captivated by the fascinating story behind the Invictus Games Racing team, who consist of two ex-military servicemen who have overcome horrific injuries sustained on operations in the middle-east, to turn their lives around and compete at the top levels of motorsport alongside pro-driver Matthew George. The story is even more inspiring when you learn that the team won their class in the first race of the season at Oulton Park last month, despite the fact that neither Paul Vice nor Steve McCulley even had racing licenses two years ago! There will be a chance to meet the drivers and see the cars in the Blenheim Palace courtyard throughout the day.

Elsewhere visitors will be treated to displays of performance Jaguars and racing cars, celebrating the achievements of the Tom Walkinshaw racing team. The team, once based in Kidlington, Oxfordshire were famous (amongst other motor racing achievements) for taking Jaguar to their Le Mans victories of 1988 and 1990 as well as creating some of the finest supercars wearing the Jaguar badge. TWR racing were also one of the major employers in their area of Oxfordshire in the 1980s and 1990s. The TWR display will include an XJ220 Le Mans car kindly displayed by Don Law. Don Law explains the car’s significance:

“The car on display is one of the four XJ220 chassis transferred from Jaguar Sport Bloxham to TWR Racing in early 1993 for the preparation and assault on the GT Class for Le Mans that year.   Of the four chassis prepared, three cars entered the Le Mans 24-hour race in 1993, and this one is chassis number 004, in full 1993 Le Mans race livery.”

The event also offers a trade show, where businesses from the classic Jaguar industry will showcase their products and services alongside cars for sale, arts, crafts and food stalls.

Interviews and commentary with visiting celebrities from the Jaguar world, car owners, racing drivers and other personalities will be broadcast on a big screen sponsored by CMC Classic Motor Cars, Bridgnorth for all to enjoy throughout the day.

Furthermore, those wanting to attend but worrying that it may cause them to miss the Spanish Grand Prix will be pleased to know that the full round of the F1 race will also be shown live on the big screen from 14.00hrs, thanks to event sponsors Pirelli.

10.40 Live commentary tour of the Concours entrants and Film and TV Jaguars. Find out about the people and cars behind these stunning exhibits.

11.20 A tour of the gathered TWR celebration cars and a chat to some past TWR team members.

11.50 Meet the Invictus Games Racing team drivers in the courtyard. We’ll be talking to Matt George live and hearing about how the season is going so far, for the Jaguar Enthusiasts’ Club Sponsored F-Type entry into the British GT Championship.

12.35 Build up to the CMC Commemorative Parade. We meet the drivers, owners and cars involved in this special moment where Jaguars take to the palace parkland.

14.00 David Marks Seminar on the history of the Jaguar compact saloon cars in the Palace Courtyard.

14.05 Live screening of the Spanish Grand Prix courtesy of Pirelli.

15:00 Awards presentation by Mike Horlor, JEC Chairman for Concours D’ Elegance and Pride and Joy in the Blenheim Palace courtyard.