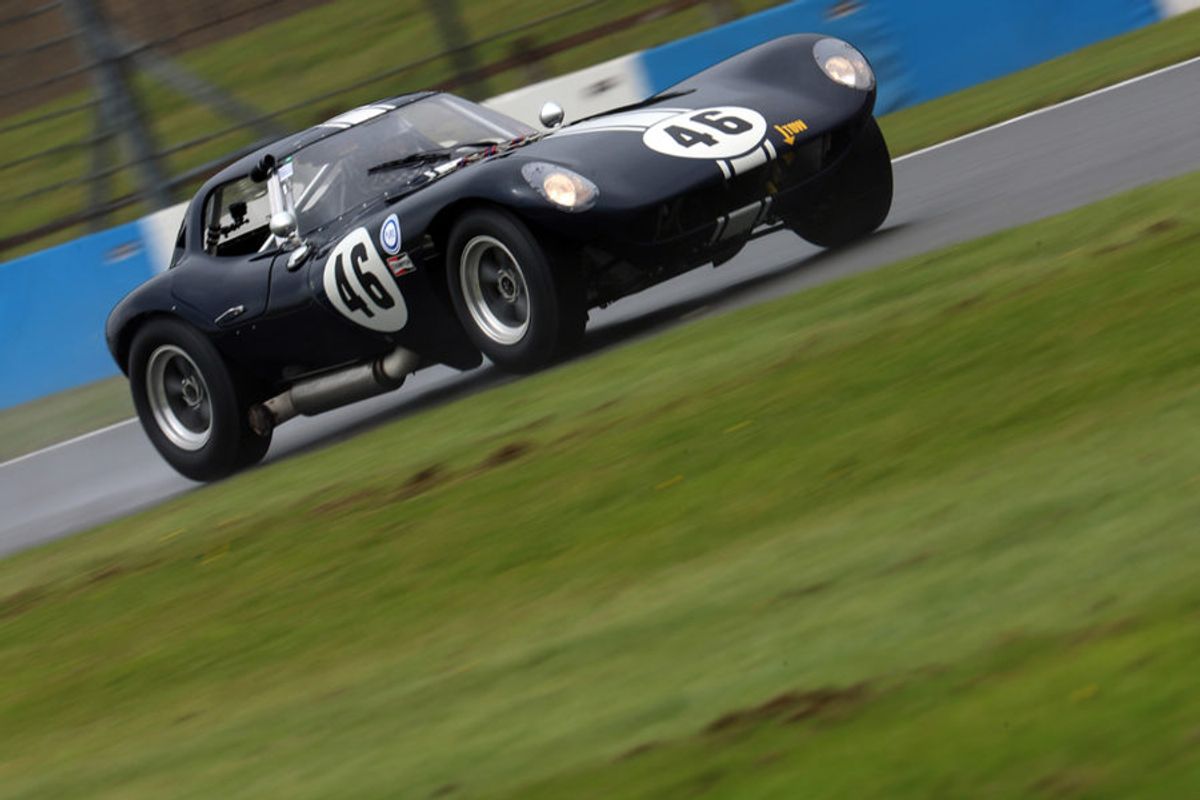 The ninth Donington Historic Festival delivered hugely-competitive racing from more than 400 historic cars spanning nine decades and ranging from Grand Prix machines and Le Mans prototypes to Touring Cars over the weekend of May 3, 4 and 5.

The calibre of the racing grids, the lure of the Donington Park circuit and the sheer fun of historic motorsport drew top-class drivers past and present, including no less than one-sixth of the present-day BTCC grid that had been out at the same track only the previous weekend. BTCC stars Colin Turkington, Andrew Jordan, Rory Butcher, Sam Tordoff and Adam Morgan all got behind the wheel of classic Touring Cars or sports cars and thoroughly enjoyed themselves, racing with the same competitive spirit they show in their ‘day job’. Other present-day racers competing at the Festival included LMP star Richard Bradley, multi Formula Ford champion/British GT driver Niall Murray and British GT racer Shaun Balfe.

Names from race programmes of the past were also out on track including 80s and 90s Touring Car aces Patrick Watts and Karl Jones, while 1970s F1 racer Howden Ganley was there in his capacity as World Patron of the Formula Junior Historic Racing Association, presenting the trophies for the FJHRA races.

The cars competing were equally illustrious. They included ERA ‘R4A’, which scored a double victory in the Nuvolari Trophy races, some 84 years after Pat Fairfield drove it to victory in the 150-mile 1935 Nuffield Trophy at Donington Park. The Nuvolari Trophy grid also featured an MG K3 Magnette raced in period by Prince Bira of Thailand, while the Jaguar Classic Challenge included a semi-lightweight E-type originally raced by Bruce McLaren.

While torrential rain ensured that only the most die-hard racing fans came to Donington Park for the Friday qualifying day, those that did brave the elements were rewarded by a spectacular show on track, as all 15 grids qualified in the wet. An added bonus for Festival visitors was the sight of the historic F1 car demonstration on a very soggy circuit, spraying water and looking for all the world like a scene from that famous Senna race of 1993.

Saturday morning dawned with blue skies and sunshine and brought the crowds with it. The track action over Saturday and Sunday didn’t disappoint, with hard-fought, massively entertaining racing played out across 17 races covering an impressively diverse range of grids all united by the quality and history of the cars and the skill and enthusiasm of the drivers.

Victory in both Historic Grand Prix Cars Association Ascari Trophy races went to Miles Griffiths in a Lotus 16, while Nick Topliss drove ERA ‘R4A’ to victory in the Nuvolari Trophy races. The driver pairing of Calum Lockie and Julian Thomas proved hugely successful, with the duo taking the chequered flag in the Jaguar Classic Challenge in an E-type and in the Historic Touring Car Challenge in a Ford Cosworth Sierra RS 500, and bringing their Ford Falcon home in second place in the HRDC Allstars race, behind Leo Voyazides and Simon Hadfield in the Shelby Cobra Coupe.


In the U2TC for under two-litre Touring Cars, the Banks brothers Andrew and Max were runaway winners in their beloved Alfa Romeo Giulia Sprint GTA, while Frederic Wakeman and Patrick Blakeney-Edwards continued their dominance of the ‘Mad Jack’ Pre-War Sports Cars in the 1928 Frazer Nash Super Sports. The Wakeman/Blakeney-Edwards duo also won the epic two-hour GT & Sports Car Cup in the Lister Jaguar Coupe and there was a Lister victory in the Stirling Moss Trophy when Richard Kent took the chequered flag in the Lister Jaguar Costin.

Former British GT champion Mike Jordan started the HRDC Touring Greats race on pole in the Austin ‘GT40’ he shared with son Andrew, and Andrew took the car to victory after the pitstop. Reflecting on a happier Donington Park weekend after his accident in the BTCC there a week before, Andrew commented “I haven’t had that much fun in a race car for a while. I had an absolute blast.”

The Pre-63 GT race was won by GT driver Jon Minshaw and his son Jack in an E-type Jaguar, the pair sharing a race car for the first time, and there was a father-and-son victory in the Tony Dron Trophy when Oliver Bryant and dad Grahame brought their mighty Chevrolet Camaro home in first place. The Royal Automobile Club Woodcote Trophy was another family affair, with brothers John and Gary Pearson taking the chequered flag in their D-type Jaguar.

Peter de la Roche dominated both of the FJHRA/HSCC ‘Silverline’ front-engined Formula Junior races in his Lola Mk 2, in spite of a gearbox problem in Friday’s qualifying which meant a drive to Chester that night to manufacture a replacement component, while Cameron Jackson was equally successful in the two rear-engined Formula Junior races in his Brabham BT2. And the Swiss duo of Ambrogio Perfetti and Oscar Rovelli campaigned their Lotus Cortina with tremendous enthusiasm in several races during the weekend and were absolutely delighted to take victory in the final race of the Festival, the HRDC Coys Trophy.

F1 demos and Spitfire flypast
The non-racing attractions were equally entertaining. The historic F1 demo cars, including an Ex-Michael Schumacher Benetton B192thrilledthe crowds with their inimitable noise, while the sight of a Battle of Britain Memorial Flight Spitfire in the skies above Donington Park on the Sunday had all eyes turned upwards for a few glorious minutes. Donington’s Launch Pad building became the temporary home of the British Historic Kart Club, who brought along a fantastic selection of nippy machines including two ex-Senna karts.

Car clubs galore
The Infield and the GP Loop were invaded by hundreds of cars from dozens of car clubs, many of whom took to the track in lunchtime parades. The most notable club parade element came on the Saturday in the form of 50 ‘Z’ cars from the Z Club GB/Classic Z Register, in celebration of the 50thanniversary of the Datsun 240Z. They were led by the most famous ‘Z’ car of all, racing star Big Sam, which was followed by no less than 15 other Samuris and a fabulous mix of Datsun and Nissan ‘Z’ cars from the past 50 years.

Paired with more improvements to the Donington infrastructure over the winter months, including a big new spectator entry area and a more immersive paddock layout, this year's Donington Historic Festival was even more accessible for all spectators, many of whom are already planning their return for the 2020 event.